From The Hour: A Taste of Local Beer 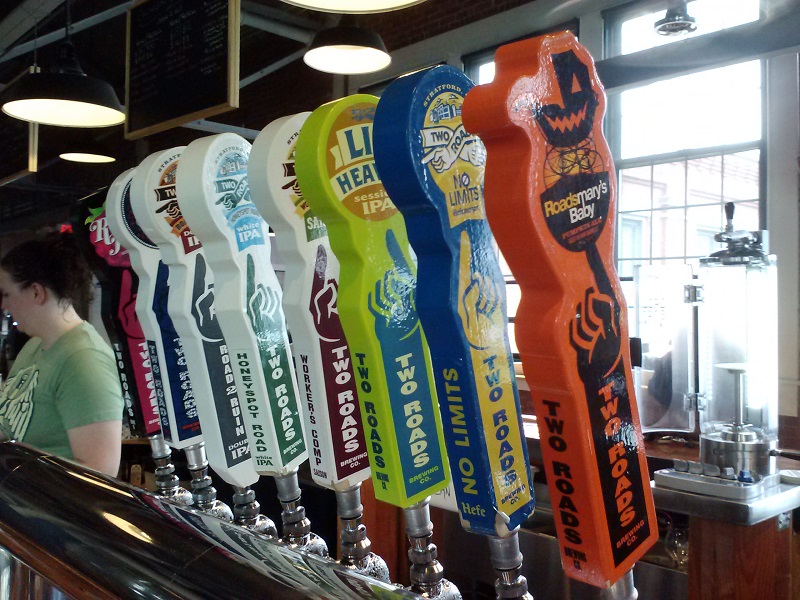 The Connecticut beer industry is booming.  More than 30 independent craft brewers are up and running and many more are on the drawing boards. Producing a broad array of beers, both traditional and innovative, craft brewers are slaking the thirst for local, satisfying and unique brews.

Thinking about that put me in the mood for some beer tasting.  Visiting breweries and drinking at the source is part of the craft beer culture.  The beers taste better under the shadow of tanks and fermenters with the bottling line rattling in the background and pallets of beer cases and  barrels ready for shipping.  At the source, the beer is always fresh and the knowledgeable staff ready to talk about the process and product.  Sometimes you get a beer that is only available at the brewery.

On a rainy afternoon, we headed for the Two Roads Brewing in Stratford, just off Exit 31. Two Roads is an ambitious new undertaking in a renovated factory dating from Connecticut’s industrial golden age. Up and running for less that two years, the brewery has already claimed a spot as one of the best in Connecticut and the Northeast.

Brewmaster Phil Markowski is the creative force behind the dozens of beers in the Two Roads portfolio. The award-winning innovative brewer has been making beer since the 1980s including an early-career stint at New England Brewing when it was at the Brewhouse in Norwalk.  Phil oversees the year-round production of six diverse beers along with three or more seasonal brews.  He’s a busy guy.

I bumped into Phil in the tasting room and chatted about the remarkable success of Two Roads and his love of brewing. He talked about the complicated renovations needed to morph the old factory into a modern brewery and pointed with pride to new tanks that hold the equivalent of 12,000 cases of beer – necessary to keep up with the increasing demand. 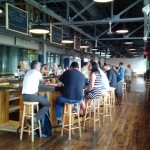 The large tasting room is on the second floor overlooking the action on the brewery floor. The bright, noisy, high-ceilinged space has photos and machinery from Stratford’s industrial past, the original wooden factory floor and exposed steel girders. A large free-standing oval bar to the left is the source for beer.  High wood tables made from cable spools fill the generous space to the right. The famous lines from the Robert Frost poem about the road less traveled dominate the tasting room from the end wall and expresses the brewery’s creative philosophy.

In addition, three seasonal beers are currently on offer:  Road Jam, a wheat beer with the aroma of fresh black and red raspberries and a 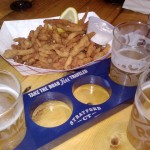 bright raspberry red color;  Via Cordis Abbey Blonde,  made with a 100 year old Trappist Monastery yeast selected in collaboration with the biology department at Sacred Heart University; and Roadsmary’s Baby, an unusual and distinctive pumpkin ale aged in rum barrels, marrying a light note of pumpkin with molasses and rum spice flavors from the barrels.

Brews are available in 4 oz tastes or 12 oz pours. Half Gallon growler jugs are filled too – bring your own or buy one there. Traditional cans and bottles can be purchased to take away.

The craft beer business is known for funky marketing, puns in the names and artistic labeling. Look at the number of apostrophes in the names, the references to the building’s industrial past and the local Stratford references for examples. It’s all great fun and a serious attempt to maintain awareness and a unique presence in an increasingly crowded craft beer marketplace. 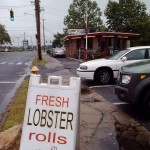 Two roads does not serve food, but encourages tasters to bring something along. We stopped at another Stratford landmark, Danny’s Drive-In just off Exit 33, for some lobster rolls and fried seafood to eat with the beer. Danny’s specializes in the Connecticut warm lobster roll – perfectly cooked lobster on a split top roll with melted butter to pour over.  A delicious steamed lobster on a bun! The lobster rolls, Shrimp Po’ Boy and fried clams were great with the beers we sampled. Choose between the outdoor picnic area or the large tables in the tasting room to enjoy your BYOF.

The tasting room is open Tuesday through Saturday Noon to 9:00 and Sunday Noon to 7:00.  Gather up some food, designate a driver and head up to Stratford for a taste of great Connecticut beer.

Next post From The Hour: A Visit To The Farm

Previous Article From The Hour: Eating Well at Main & Wall