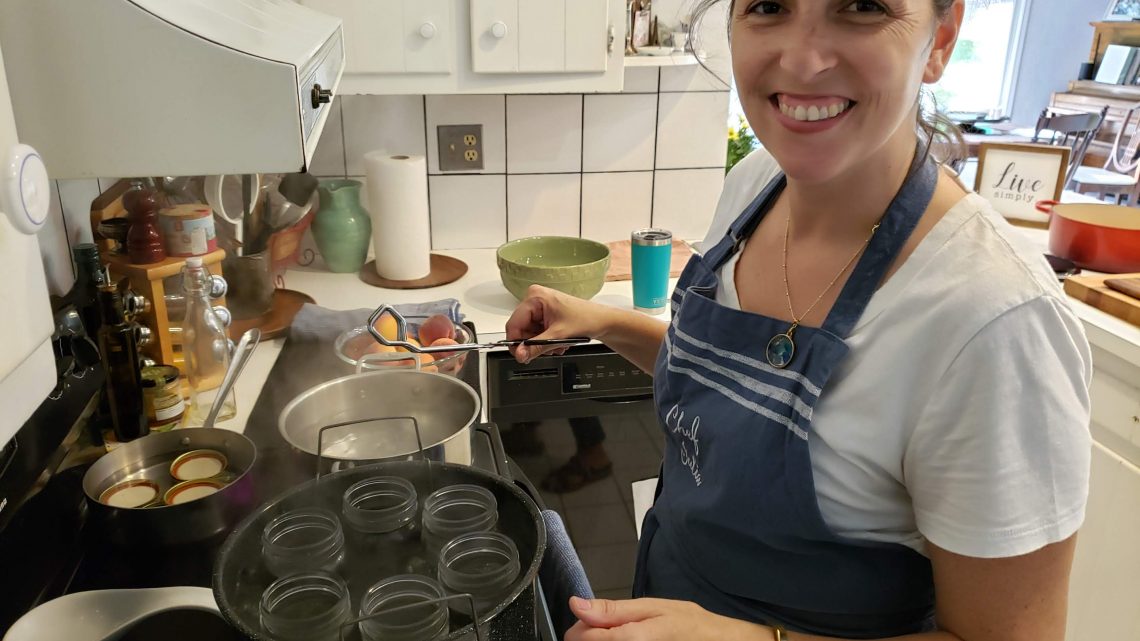 Every time I go to buy farm produce, I worry that this could be it. At this time of year, local bounty can end abruptly.  Farmers have already dodged the drowning rain and high wind of two tropical storms.   It’s only a matter of time till the first frost; then it’s goodbye to tomatoes, corn, zucchini and all the rest.

Sad as that may seem to me, it prompts others to get canning — preserving farm-fresh flavor to last year round. I admire their industry and passion. A love of local produce sets their pots simmering. 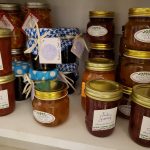 Home canning, “putting up” as it used to be called, is a time-honored activity.  It predates modern refrigeration, freezers, and our world-wide system of food distribution.  That was a time when eating local was the only option. During the few short weeks when the crop ripened, glass jars with two-part metal tops were sterilized, filled, and “processed” to be enjoyed over the course of the year.

I turned to Julia Currie, an avid canner, to learn more.  She lives in Easton amid a mix of colonial elegance, modern suburbia, and roadside farms. Those farms and local markets give her access to fresh produce in season. In addition, she has a network of sources around the state and in the Hudson Valley for foods to preserve. 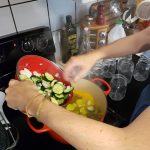 I dropped in a few weeks ago as she was putting up bread and butter pickles and spicy peach salsa.  Pots were bubbling on her stove, ready to sterilize jars and blanch peaches for peeling.

Julia’s canning season starts in mid-June with strawberry preserves.  Following the harvest, she plows on through blueberry jam, apricot and peach preserves, quince jelly, corn and tomato salsa, dilly beans, and pickles.  She likes to mix it up with chutneys, a jardine of assorted pickled vegetables, and in some years, pizza sauce.

Her pantry shelf is a colorful mix of jars, large and small, labeled or tagged, some dressed for giving with bright cloth caps. 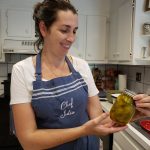 “What I love about canning,” she told me, “is that you can enjoy the produce over the whole year.  Canning is like magic.  It’s a pleasure because the result lasts so long.”  She finds the work satisfying and the results rewarding.

A few simple tools are all you need for canning: a large pot to sterilize the jars and process them when filled; tongs for handling the hot jars; and a large dutch oven for cooking.  Julia recommends a good digital scale, since many recipes are measured by weight.

While we chatted, Julia put the empty jars in the boiling water to sterilize for ten minutes. At the same time the sliced cucumbers, onions, vinegar, and spices were brought to a boil.  The clean jars were filled, lids screwed on, and then submerged in boiling water to process for 10 minutes in order to sterilize and set the vacuum seal that will preserve the contents. That’s it.

Chefs are getting into canning too. At the Kneads Bakery Cafe in Westport, chef Daniel Moreno has been socking away preserved fruits to use in his baked goods along with pickles, honey, and peppers to use in his menu items. 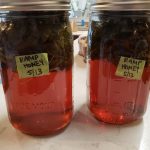 On a recent visit he proudly showed me the preserved and canned foods from local farms that he’s been putting up this summer.  Only open a year, he’s already made brandied cherries, bread and butter pickles, blueberry jam (for filled donuts), canned Jimmy Nardella peppers, and wild ramp honey.  Makes your mouth water, doesn’t it?

If you’re craving some pickled or preserved specialties but don’t want to take the plunge right now, look for Jane’s Good Foods at local farmers markets and speciality stores. She puts up a range of pickles, fruits, and relishes that have a loyal following.

Home canning never went away, but it’s having a renaissance now.  It’s not too late to put up some produce before the season ends.

Next post From Sunday Arts and Leisure: California wine, off the beaten path

Previous Article From The Norwalk Hour: An apple a day