From The Hour: Hard Cider – Bottled at Last 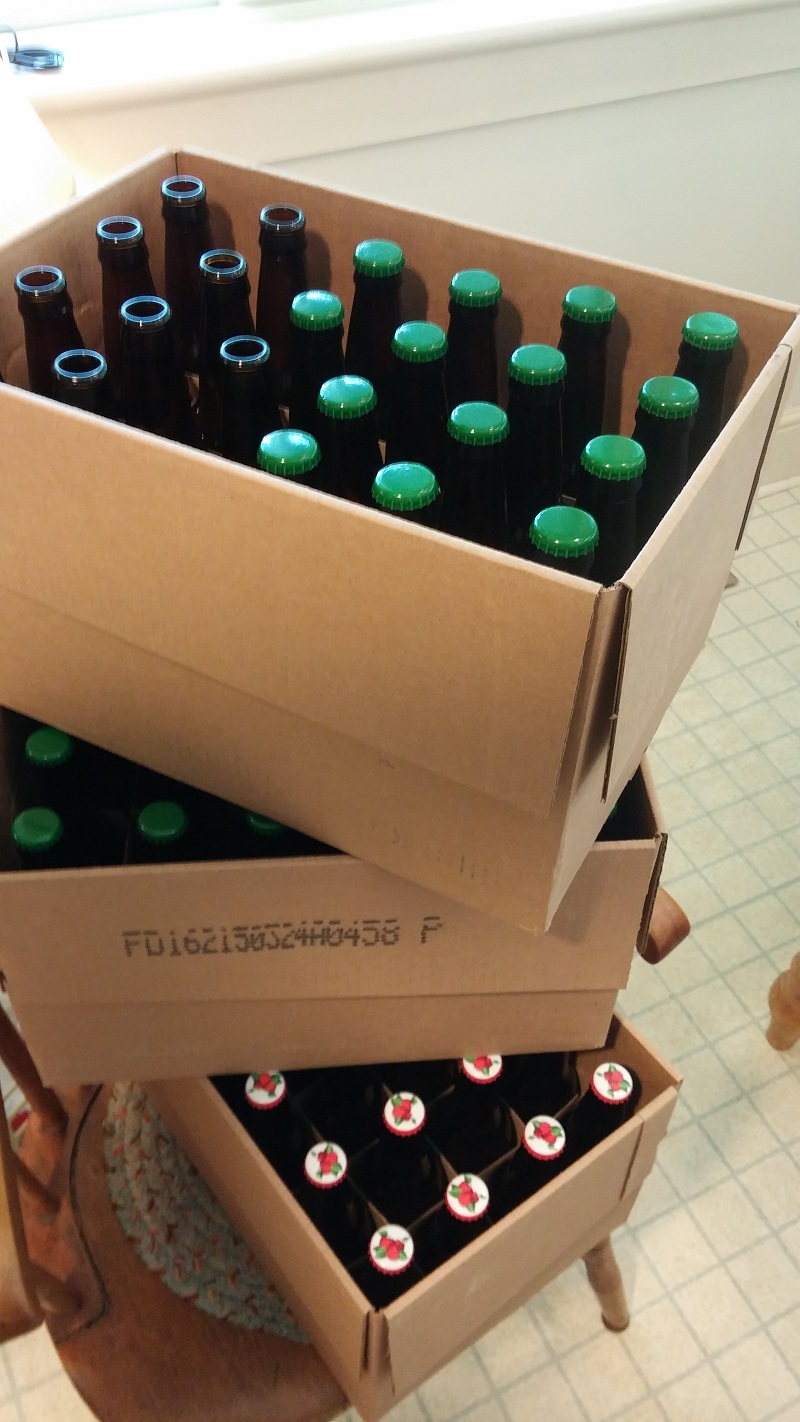 Our Cider - Bottled at Last

Back in November, at the tail end of Fall, before anyone contemplated the possibility of a killer winter, we went to Beardsley’s Cider Mill in Shelton to get the juice for hard apple cider. At last, after a long winter and a beautiful spring, the cider has fermented and is ready to be bottled.

As fermentation projects go, making cider is a lot simpler than making beer and less tricky than making wine. With the advice of experts Mark and Tess at Maltose Express in Monroe (www.maltoseexpress.net), we settled on an American style hard cider and got some gear, the recipe, the yeast, and a few odds and ends needed to make it all work. Once we had the fresh-pressed cider – a special cider-making blend – the project was off and running.

I’ve posted some updates on the project from time to time. You can see them at www.FranksFeast.com. Click on Making Hard Cider.

Bottling was a big step and what I thought would be the last part of the process. (Notice I said, I thought it would be the end). Back we went to Maltose for some bottles and advice on what to do. Mark and Tess couldn’t have been more helpful. It turns out that at bottling time there are some choices to make on how to finish off the cider. We decided to do three gallons in a sparkling style and the remaining three gallons still.

The fermented cider is pretty stern stuff. It has a lovely aroma of apples, but it’s very dry and a little harsh to drink. The alcohol level is somewhere around 10 to 12 percent, like a very strong beer or a fairly light wine.

The effervescence of the sparkling cider should tame the wilder flavors and let the apple shine through – at least I hope so. Natural corn sugar was dissolved in water and added to the cider just before bottling. This will fuel a second fermentation in the bottle to make the bubbles, just like champagne. Mark cautioned that there will be a little sediment in the bottom of the bottle – residue from the fermentation.

Sweetener that will not ferment was stirred into the remaining three gallons to be bottled for still cider. This is done by taste to find the preferred level of sweetness. Stir some in, sample, add some more, and keep tasting until it seems right. We’ll see how our guesswork turns out when it’s time to drink. 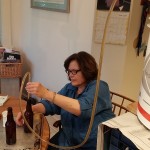 The bottling “line” was set up in the kitchen. All cider making steps start with sterilizing the equipment – yeast and bacteria are necessary, but only the ones we want. The prepared cider was in a bucket on a milk crate on the kitchen counter to get it up high. A clever siphon pump was attached to a tube. At the end was a valve to let the cider flow when pushed down in the bottle. All this made easy by gravity and the siphon. Marsha filled the bottles and I capped them with crown caps – little apple designs on the sparkling cider and solid green ones on the still. Once we were set up, it was surprisingly easy and went quickly. We got 33 bottles of sparkling and 29 bottles of still. 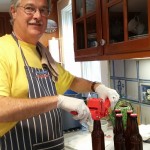 Both ciders will need more time (more waiting!) in the bottle: the sparkling, at least a month at room temperature, for the in-bottle secondary fermentation; the still, about the same length of time to get over the “bottle shock” of being bottled. (This is true of wines, too – they need to rest after being bottled.) No instant gratification for us. It will be mid-summer before we have a sense of how the ciders will turn out. I’ll let you know.

The cider making has been a very satisfying DIY project. There are lots of home fermenters making beer, cider and even some distilled spirits. It’s challenging but you get a liquid reward at the end. There are other recipes for cider with flavor variations like cinnamon, honey, fruit flavors or even adding wood chips for a barrel aged accent. The cider can be concentrated, too, for making applejack – that most American of spirits. Lots of options for next year.

Beer making is another way to get involved in home fermenting. The styles, recipes, and flavor combinations are limitless. The good news is the process is fairly short so the rewards come quickly. Maltose Express is primarily a brewer’s supply store and Mark is a remarkable brewer. He has a deft command of brewing tools, process, and methods and can make just about any style of beer. 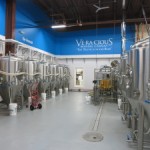 This month, Mark and Tess will be opening a new brewpub, Veracious Brewing, right next door to the store (246 Main St, Monroe). They have a line of gleaming stainless brewing equipment ready to make beer for the pub. I’ll let you know when they’re open. If you like hand crafted small-batch beers, you’ll want to try these.

In the meantime, I’m waiting (I wish I could say patiently) to try my cider and join the line of cider makers that extends back through American colonial life.

Next post From The Hour: Restaurants for All Occasions on Long Ridge Road

Previous Article From The Hour: Love that Sourdough Bread