From The Hour: A Visit To The Farm 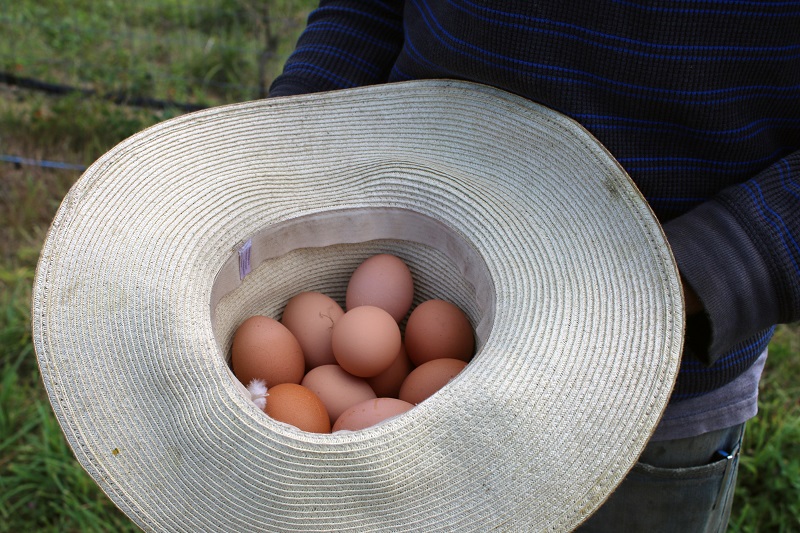 My nephew Jonathan and his wife Charlotte are farmers. Apart from a grandfather who grew up on a farm, there was nothing in their upscale suburban background or their liberal arts education that foretold this lifestyle, but there they are.

Rising interest in our food sources and farm-to-table eating has brought a new generation of farmers back to the land. Jonathan and Charlotte find life on the farm to be satisfying in a hands-on way with almost instantaneous feedback of both success and failure. Their close-to-nature outdoor life is both cutting-edge and back-to-basics. Jonathan says, “The attraction was hard work with tangible results, a healthier lifestyle and life immersed in the natural world.”  It’s not a way to get rich quick.

Sweet Acre Farm, their place in Lebanon, CT, is at the end of an unpaved road, but (like so much in our small state) only 10 minutes from the 65 mph pace of Rt. 2.  Two of the six acres are vegetable beds on a nice level patch backing up to the woods. The remaining steeply hilly space is given over to a small herd of goats for milk, a couple of pigs to fatten, chickens for eggs and their house, which they’re renovating as time allows.   They work very hard.  During the growing season, there is always something to do.

Twice a week they’re at Farmers Markets in Storrs and Hartford’s West End to sell their produce.  The day before is devoted to picking, washing and preparing their market goods.  They grow a diverse range of heirloom tomatoes, including large, jumbo and cherry sizes sporting shades of red yellow and purple; a variety of squash and peppers along with eggplant, potatoes, and carrots; lettuce and Swiss chard and plenty of kale too.  Just as in most of agrarian history, their week revolves around these market days – preparing, selling, meeting friends and visiting with customers. “Delivering our produce into the hands of people who need it motivates us. We feel very appreciated for the work we do,” they say.

Restaurants are increasingly important as buyers of Sweet Acre produce.  On the way to the market they drop off menu-ready orders direct from the fields to restaurants including Firebox, Cafemantic, La Belle Aurore, The Kitchen at Billings Forge, The Half Door, and the Willimantic Food Co-op.  Farms supplying ingredients are often named right on the menu.

Jonathan and Charlotte did not grow up farming.  Their first experience at Hall’s Farm in Simsbury CT got them hooked. To gain the needed skills they worked on farms in Connecticut, Massachusetts and served a very demanding apprenticeship in Maine and then rented fields for three seasons to hone their craft. A close knit group of more experienced farmers advised and mentored as needed.  A series of moves to larger fields and different locations added to their expertise until they were able to purchase the land in Lebanon.  Now they, in turn, are helping beginning farmers.

On a beautifully sunny afternoon we wandered through the fields and around the farm.  It’s a working farm, not a showplace.  All their energy is devoted to the crops.  Their most important asset is an Italian-made walk-behind tractor for plowing, cultivating, and endless other uses. On our visit, it was pumping water for the pigs. The fields are arrow straight and meticulously maintained (mostly by hand).  While the farmers are too new to this land for an organic certification, the fields are pesticide free and naturally fertilized.

Walking along it’s easy to see lots of green tomatoes – some starting to gain color and ripen, lavender eggplants peaking out from under the leaves, and peppers of various shapes hanging on their stems.  Jonathan pulled up a potato plant to show us the almost-ready red potatoes just underground. Charlotte cautioned us not to step on the feathery carrot tops. Squash and pumpkins of varying shapes and colors weren’t quite ready for harvest. Now that they’re on their own land, some perennial crops like asparagus, berries and fruit trees will join the mix.

The chicken coop is on wheels and is moved along the perimeter of the fields about once a week.  The “ladies” inside their wire enclosure around the coop, peck at your shoes and ankles in the hopes of an unexpected morsel. Jonathan opened the back of the coop and filled a straw hat with eggs for us to take home.

Farm-to-table is the big buzz in the food world.  For the last few years the connection between food and its source has been getting stronger and easier to see. Sweet Acre farm is a part of this food evolution.

Previous Article From The Hour: A Taste of Local Beer

From The Norwalk Hour: Chefs on the move.

From The Norwalk Hour: Springtime Creativity at Farm-to-Table Restaurants

From the Norwalk Hour: Chez Panisse, a Restaurant that Changed the Way We Eat