From The Norwalk Hour: Chefs on the move. 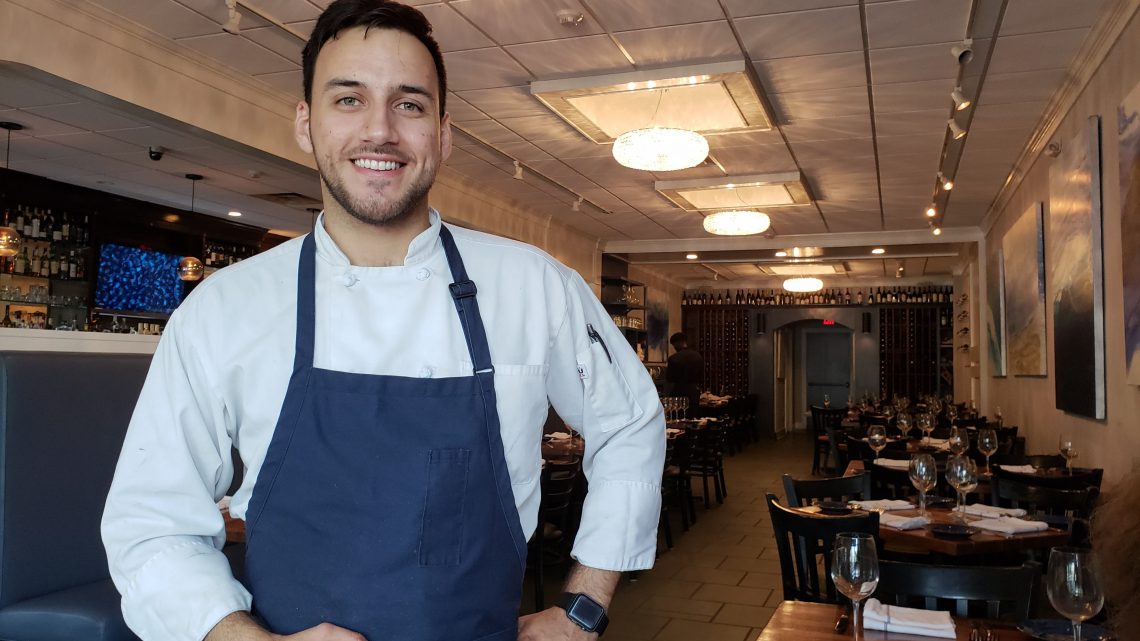 Chef Nicolas Ramirez at One29 in New Canaan

Restaurants come and go. Some only last a few months or years, while others thrive for decades and generations. Regardless of their tenure, you can be sure that there is some turnover in the kitchen.

For the most part, chefs and cooks are anonymous.  Graduates of either the school of hard knocks or a prestigious culinary institute, they labor in obscurity.  Just compare the few chefs you can name with the number of restaurants you frequent.

So when a restaurant changes chefs, it’s barely a blip on the patron’s radar screen. You may notice a menu revision to take advantage of the new guy’s (yes, they’re mostly guys) background and skills, but overall the food maintains the image and theme of the restaurant. If it’s done well, you probably won’t notice a thing.

We recently had a chance to meet two chefs on the move who are settling into new opportunities. 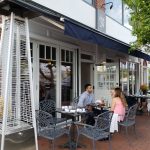 Nicholas Ramirez, chef at the newly opened One29 on Elm Street in New Canaan, has followed a well-trod path, gaining experience along the way. His cooking career began in his hometown of Ibague in the Andes Mountains of Columbia where he sold home-made lasagne and then started catering.

After a one-year stint at culinary school, he came to Fairfield County and was hired to work the salad station at a well-established Italian restaurant.  Nicholas proved himself to be hard-working, talented cook – eventually achieving the position of Sous Chef (second in command) of the busy kitchen. 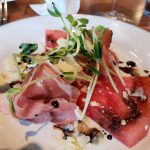 Recruited from that position he went to One29 to work under an experienced chef, who had been engaged to set up the restaurant and get it going.  The opening chef didn’t work out, as so often happens, so Nicholas stepped into the top job.

At dinner on a recent warm evening, he encouraged us to try a couple of his off-menu specials including a refreshing salad of watermelon with  pecorino, prosciutto, and balsamic reduction. Marsha enjoyed his fat tubes of pasta tossed with a well-seasoned tomato-caper sauce that was surrounded with plump mussels. 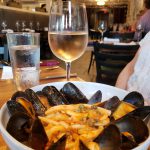 Ramirez pointed out some of his favorites on the menu including a mango gazpacho with a bright yellow color and a cool cucumber flavor. A crisp-skinned fillet of Branzino was served with grilled white asparagus and a generous handful of crunchy macadamia nuts.  Salty-seedy Za’atar flatbread with a tahina dip got us started.

The cool, classy space, divided by a long blue/gray upholstered banquette, perfectly lends a sophisticated yet casual feel.  There are a few tables on the sidewalk under an awning if you feel like doing some people watching on Elm St. 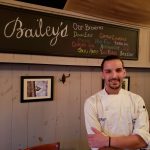 In Ridgefield, we met, Zach Campion, the new chef at Bailey’s Backyard.  He’s a graduate of the top-notch, four-year culinary and management program at Johnson and Wales in Providence. Since then, he’s worked his way through award-winning kitchens including Metro Bis in Simsbury and On20 in Hartford.

Recruited almost a year ago to come to the well-established farm-to-table restaurant by owner Sal Bagliavio, Zach successfully explores local farm and seafood sources on his creative menu. 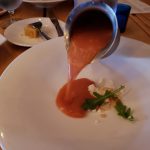 A bright and refreshing tomato-peach gazpacho was a great way to start a summer dinner. Crisp tempura-fried shrimp tacos had the crunch of kohlrabi slaw, the heat of jalapeno crema, the brightness of fresh cilantro and a generous squeeze of lemon. “Each station in the kitchen has cut lemon halves ready to squeeze on a few drops of bright acid,” Campion told me.

Vegan pad thai wasn’t a dish I was expecting to see, but with a gentle heat and rich broth, it was a hit. A main course of lentils with meaty, roasted baby carrots and the surprising sweet complexity of garam masala golden raisins was another unexpected winner. 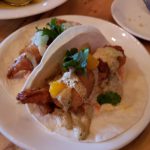 Each chef brings his own interests, experience, and skills to the established concept of the restaurant. Change is inevitable, but when managed well, the dining experience should only get better. 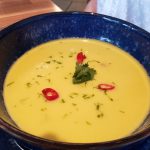 Mango Gazpacho at One29

Next post From The Norwalk Hour: Crazy good roast chicken

Previous Article From The Norwalk Hour: The annual gathering of the delicious industry