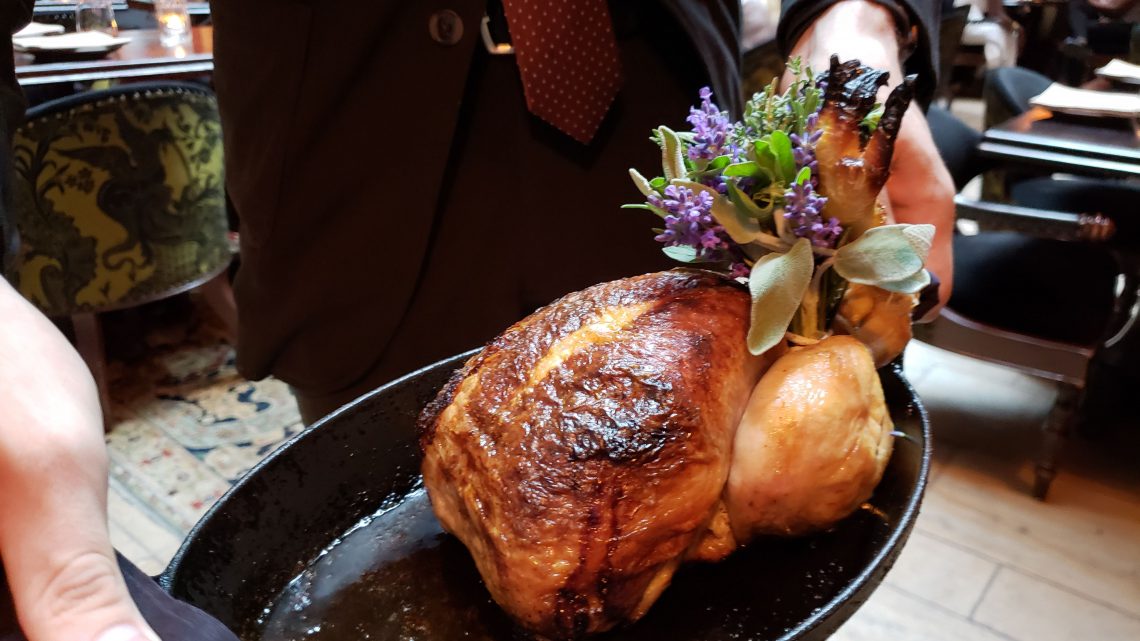 Roast Chicken for ninety-four bucks.  You’ve got to be kidding! That was my first (and second and third) reaction to raves about the special of the house at NoMad in Manhattan.

Yes, it was for two, taking the tab down to $47 per person, but that’s still pretty steep for roast chicken, even in New York. But the kudos kept coming, especially from Marsha’s sister and her husband, even though they live in Los Angeles.

Frequent business trips to the Big Apple have made Tricia and Mark almost regulars at this much-praised restaurant at 28th and Broadway in the trendy NoMad (North of Madison Park) neighborhood.  It’s the brainchild of Chef Daniel Humm and his partner Will Guidara creators of Eleven Madison Park, one of the top restaurants in the country.

Succumbing to the unstinting praise, we finally made reservations – and we weren’t disappointed. 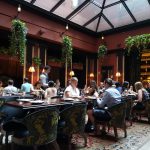 The NoMad bird isn’t just any roast chicken: it’s specially fed; flavored with foie gras, black truffle, and brioche; and prepared by some of the most skilled cooks in New York.

The restaurant occupies a central, glass-covered courtyard in the NoMad Hotel.  The space is tastefully fitted out in upholstered chairs, oriental rugs, and polished mahogany tables, with hanging plants living off the sunlight from the skylight above.

The chickens are sourced from farms with long-term relationships to NoMad.  Our server, Sarah, explained that vegetable scraps from the three-star kitchen are sent back to the farms to feed the chickens, an environmentally friendly loop known as Green Circle feeding. 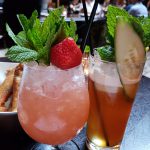 Our captain, Alfred, set us up with some refreshing, tall, citrusy cocktails garnished with big handfuls of mint, plus a strawberry for me and a cucumber slice for Marsha as an antidote to the sticky 90-degree heat of the day.

Prawn fritters from the snack menu got us started – four battered and crisply fried shrimp with a tub of scallop mousse for dipping.   Next, a shared chiffonade of snow peas, thinly sliced and lightly dressed with mint, pecorino cheese, and pancetta was almost as refreshing as the cocktails. 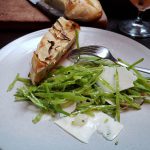 While we were finishing up the snow pea salad, we were introduced to our beautifully roasted chicken. A nattily dressed captain brought out the whole bird, gloriously browned in its individual Staub oval cast-iron roaster, sporting a bouquet of sage leaves and lavender colored flowers.  It was so recently from the oven that the pan juices were still sizzling. After our ohs and ahs it was whisked back to the kitchen for further action.

Sam Sifton, restaurant critic for the New York Times, was allowed in the NoMad kitchen in 2012 to document the roasting process, a process which has changed very little in the interim.  According to Sifton, a puree of foie gras (goose liver) mixed with brioche bread crumbs and truffle oil is piped under the skin of the breast. This magic potion, not dominated by any of the three flavors but subtly bringing forward the best of each, keeps the chicken moist. 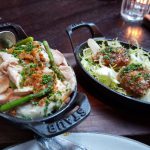 The chickens are roasted at 450 degrees in a stone-lined oven yielding their signature “nut brown” color.  The foie gras bastes the skin from below while a generous wash of butter bathes it from above.

When the breast is perfectly cooked, the dark meat is still a little underdone. After the dining room presentation, the chicken is carved and the dark meat briefly sauteed with shallots, mushrooms, chicken stock and dressed with a brown butter Sabayon for a dish that would stand alone if not for the stunning breast. The wings are boned, cooked confit style, and presented as a third option. The perfectly cooked breast is accompanied by asparagus two ways:  a long fat spear of white, and an intensely flavored puree of green.

Was it worth it?  You bet! Could you eat it every day?  Too rich for that. 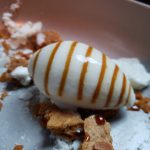 While at dinner we got a three word text from our west coast family: Milk and Honey.  There it was on the dessert menu, modestly described as having shortbread, brittle, and honey. Three scoops of milk ice, striped with buckwheat honey from Andrew’s Honey in Norwalk arrived on a bed of crumbled honey-oat shortbread, dehydrated milk foam, and honey brittle.  Sounds complicated, looks simple, tastes amazing!

The evening turned out to be a satisfying splurge. The very professional yet friendly service, the crazy good chicken, and the elegant surroundings merged into a memorable evening. 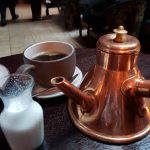 Next post From The Norwalk Hour: When the world gives you lemons - it must be summer

Previous Article From The Norwalk Hour: Chefs on the move.