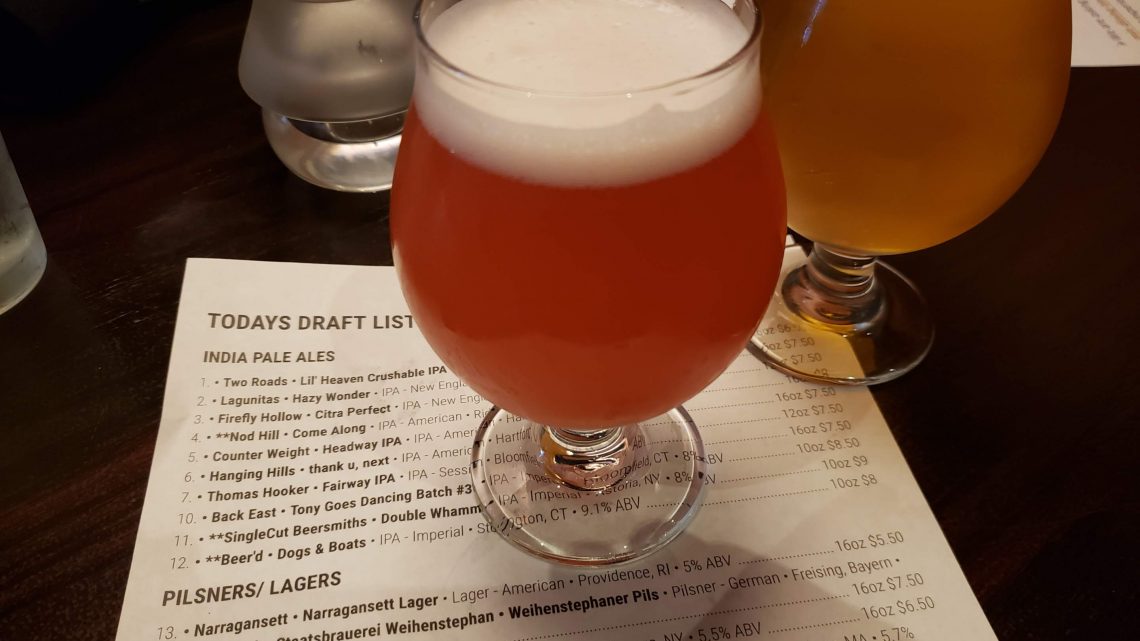 Craft beers at the Sedona Taphouse in Norwalk

Craft brewing is alive and well in Connecticut. From established breweries to startups to beer-bar restaurants, there’s never been a better time to lift a local brew. 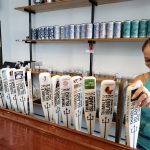 According to the Connecticut Brewers Guild, as of May 2021, the Connecticut beer scene boasts more than 120 operational breweries, with many more in planning.  I’m told there are north of 140 brewery licenses authorized, all representing the dream of brewing memorable beer.

Craft breweries are nothing new, but there’s an unending flow of new flavors and styles coming out of the taps of creative brewers. Fond of New England IPAs?  There are hundreds of versions to be explored, each an individual interpretation of hops, malt, and technique.  Want to try a sour beer? They’re hot right now.  It’s a revelation to learn how many styles of beer are out there.

A visit to the brewery tasting room is the best way to taste the full range of flavor and style from one source.  Larger local outfits like Two Roads and their sister brewery Area Two, both in Stratford, have expansive tasting facilities with a rotating program of their beers on tap. There are usually a few small-batch examples available only at the brewery. 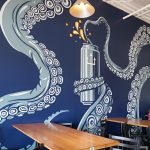 At Branford’s Thimble Island Brewery they’ve expanded several times since their 2010 start and still are squeezed for space.  They took advantage of pandemic downtime to add a brewpub.  A striking mural of the brewery’s iconic tentacles painted by local artist Jessica Battista dominates one two-story wall opposite the bar.

On a recent visit, Marsha and I met Sales Manager Greg Page and Kelley Gargano who handles marketing.  They toured us around the bustling brewery, proudly showing us new high-tech canning equipment and explaining their busy production schedule. 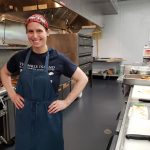 After sampling their beers at lunch in the new high-ceilinged open-plan space we got a peek in the kitchen and met chef Amanda Vasquez.

“We needed to add a full menu,” Page shared.  “Our customers were leaving to get dinner somewhere else.”  Vasquez is developing a beer-friendly menu of snacks, flatbreads, sandwiches, and burgers that pair well with the Thimble Island brews.  It has proved popular.

Twenty-four taps at the bar showcase the range of ales, IPAs, sours, stouts, and porters.  There are nine core beers available year-round along with a rotating selection of seasonal brews and themed styles. In the Island Hopper series, for instance, a new IPA is released every eight weeks. 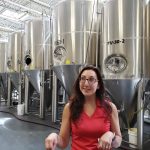 Thimble Island founders, Justin Gargano and Mike Fawcett, were home brewers with a yen to get into the business. That’s typical of craft breweries.  Most of the brewers started at home before moving into the professional ranks.  But in addition to brewing skill, you need some business acumen to make a go of it.

The brewer, head brewer, brewmaster, whatever the title, is like a chef in a restaurant. He or she has access to the same ingredients as everyone else, but the recipe, the method, and the care taken all make a unique final product. Experience and ability lead to quality.

Restaurants that specialize in beer are the best way to enjoy beers in many styles from local, national, and international breweries. There are a couple notable options in Norwalk: Sedona Taphouse and the Yard House.

Sedona Taphouse in the Waypoint complex on West Avenue has a list of about two dozen beers on tap that is updated daily. Organized by style, the emphasis is on Connecticut breweries.  IPAs get the most real estate on the tap line, but there’s still plenty of room for pilsners, wheats, ales, stouts, and sours. 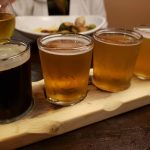 Jack’s Abby Pride and Parquet lager got our evening started for Marsha. I opted for a refreshing low-alcohol Weiss Trash Berry, a sour Berliner Weiss-style flavored with raspberries from New England Brewing. Both matched well with our starter of spicy Thai shrimp ($10.90).

Flights, four small glasses of your choosing, are a great way to sample within a category or across the menu.  Our flight included: Nod Hill, Come Along IPA; Back East, Tony Goes Dancing #30 IPA; New England 668, a Belgian strong golden ale; and Black Hog, coffee milk stout.  It was fun to discuss our favorites and how they paired up with Marsha’s seared scallops (24.90) and my Acapulco fish tacos (14.90).  The stout was great with the over-the-top peanut-butter explosion cake (8.90). 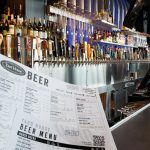 Yard House in the SoNo Collection mall promotes a staggering 100 + taps. The array of taps seems to go on forever.  The current selection includes twenty local beers. I’m told Nod Hill Geobunny IPA is among the most popular. The full beer list is organized by style, making it a little easier to pick and compare. Friends who have eaten there heap on the praise: “Extensive menu, exceptional service, and tasty food!”

Enjoy a favorite or discover something new at a tasting room, brewpub, or beer-focused restaurant. There’s always something innovative brewing in the craft beer universe. 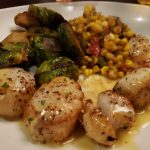 Seared Scallops at the Sedona Taphouse

Next post From The Norwalk Hour: It’s blueberry baking season

Previous Article From The Norwalk Hour: Indulge in a Bastille Day Celebration