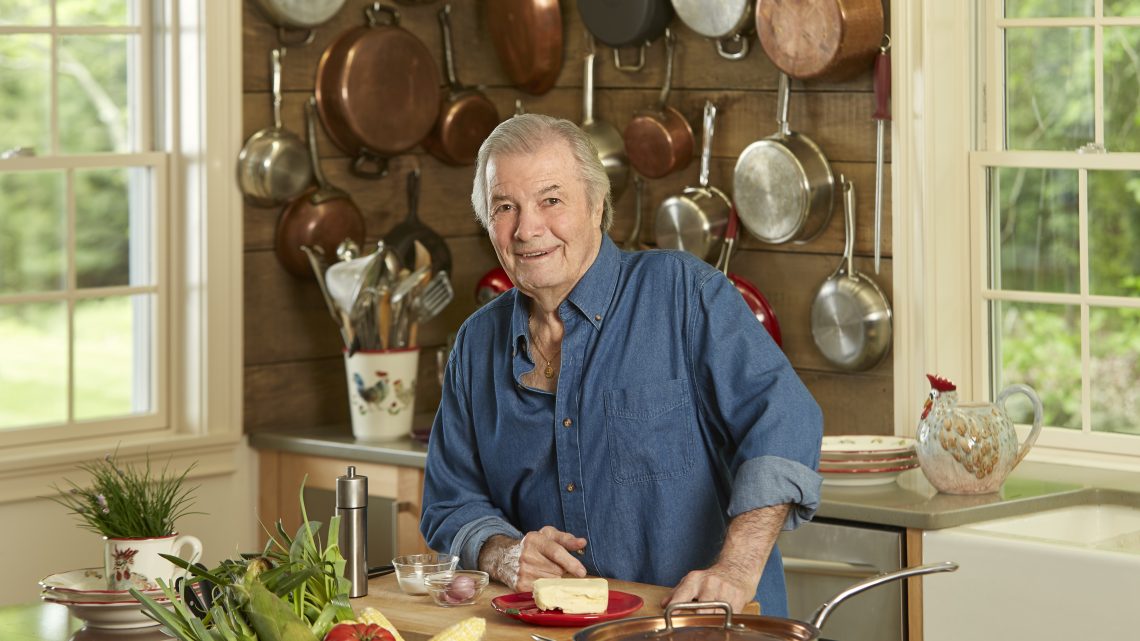 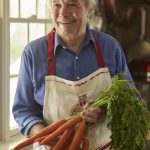 Marsha makes fun of me when every afternoon I excitedly check Facebook for the latest posting from Chef Jacques Pepin. I look forward to his demonstrations of everyday cooking when he shares recipes that he and his wife enjoy at home.  All this is done in his home kitchen with charm, flair, and a masterful technique that he’s been honing since his cooking apprenticeship at age 13.

In just a few minutes Pepin whips up a good-looking dish that you just know tastes great. All this with simple, every-day ingredients and a minimum of fuss.

Not for him hard to find, exotic ingredients. In one example, he’s not above adding a squirt of common ketchup to the Lyonnaise specialty, Poulet au Vinaigre. In another, as the breakfast cook at the luxurious Hotel Plaza Athénée in Paris, he used melted ice cream as a batter for french toast.

A few weeks ago, the chef and I spent a half hour on the phone talking about his videos, the Jacques Pepin Foundation, and what he is working on now. A natural storyteller with fascinating experience and vast expertise, he has a lot to share.  I asked him if he really made french toast from ice cream.  “Oh yes,” he said, “but in France the ice cream is very rich, made with eggy crème anglaise.”

The videos are made in support of the Jacques Pepin Foundation, an organization that, as the website states, “Supports community kitchens that offer free life skills and culinary training to adults with high barriers to employment.”  Pepin was proud of the foundation’s work helping those “disenfranchised” from life by drugs, incarceration, or homelessness to gain kitchen skills and find a career path. 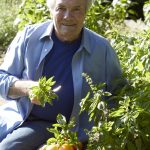 Seasonal produce from his backyard garden.

Pepin works with his long-time photography collaborator Tom Hopkins to produce the videos. “It’s just the two of us,” he shared, “a fixed camera for me to look at while Tom uses a hand-held camera for the closeups. I do all the set up and clean up. When our schedules permit we get together to film seven or eight episodes in one day.”

It was his daughter Claudine’s idea to show everyday cooking from the pantry for home cooks like us.  He gets his supplies at the local Stop and Shop or Big Y and his improvised ideas from years of experience.  Seasonal produce from his backyard garden is often the inspiration.  Many dishes are made in deference to Gloria, his wife of 54 years. “This is how she likes it.” he often says with a shrug. 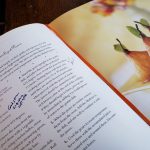 I mentioned that we often cook the roast caramelized pears from his 1998 book, “Cooking with Claudine.” That sent him off on a riff about a now-lost show he filmed for WNET on roasting pears. He recalled that in the segment he made three different off-the-cuff preparations depending on the ripeness of the pears.  Pepin cooks in the French tradition, creating on the fly using ingredients that are available, seasonal, and appealing.

He’s a thrifty cook.  Nothing in his kitchen is wasted.  From odds and ends of cheese to slightly-wilted vegetables, he’s got a flavorful way to use them up.  He also likes to use inexpensive ingredients to make soups and stews, adding whatever might be on hand. 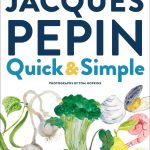 Pepin’s cooking doesn’t require a lot of fancy tools. He often stirs the soup with a measuring spoon. A four-inch paring knife serves as a tool for turning, lifting, and stirring, as well as cutting. But his skills are remarkable. In one episode on making Melba Toast, he perfectly cuts a slice of toasted white bread in half along its equator. Just try it if you think it’s easy!

His new book, “Quick and Simple,” includes 250 recipes for today’s cooking. With easy, fast, and impressive recipes, the book is packed with pro tips and techniques that will make everyday cooking fun and creative. He’s looking ahead (at age 84) to another book about 100 ways to cook chicken, not recipes so much as stories. 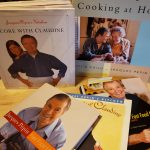 Pepin’s cookbooks in our collection.

Pepin has spent a lifetime in kitchens starting with his family’s restaurant in Bourg-en-Bresse.  After a stint at the Hotel Plaza Athénée Paris, he moved on to the Élysée Palace where he cooked for three French presidents.  In 1959 he came to the legendary restaurant Le Pavillon in New York, part of a wave of French chefs that revolutionized eating in America. He went on to a ten years at Howard Johnson’s restaurants as director of research and development and then began his career as teacher, TV personality, and author with more than twenty-five cookbooks to his credit.

I can’t think of anyone in the foodservice world that doesn’t respect Jacques Pepin and wouldn’t defer to him as the patriarch of American cooking, despite his French background (and charming accent).  He’s been on the U.S. food scene since the 60s and has carved out an honored role in the food world.

Next post From The Norwalk Hour: The Roots of the Matter

Previous Article From The Norwalk Hour: Election Cake is a Winner for Governor Lamont and the Candidates

From The Norwalk Hour: Dinner for one with French fare and a warm welcome