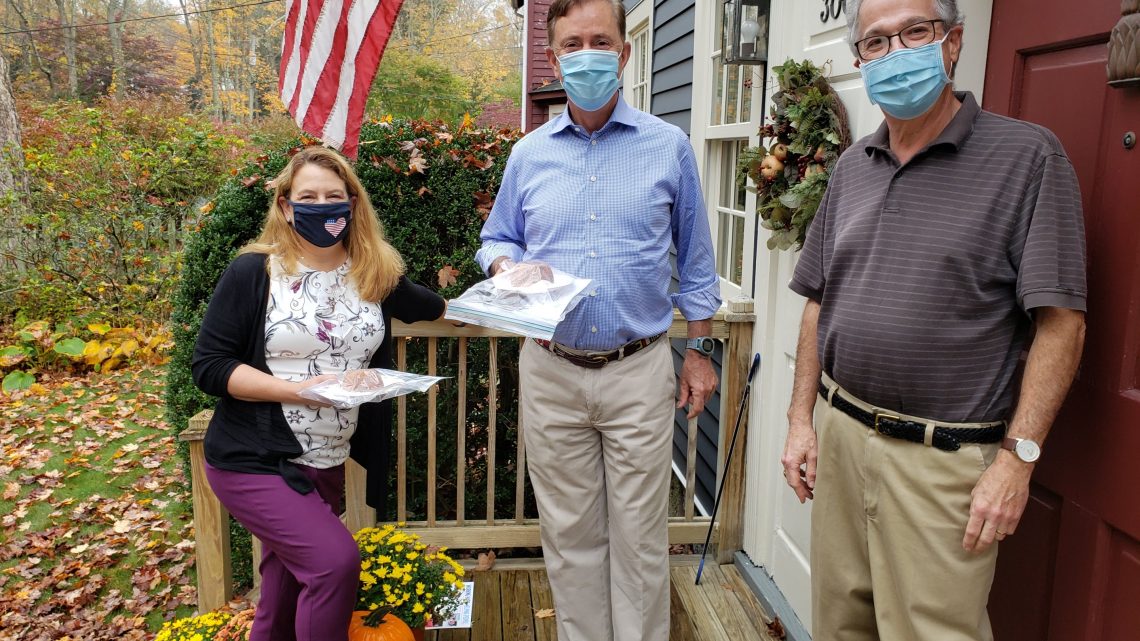 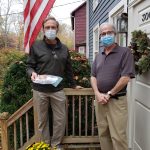 On a drizzly Saturday morning, State Representative Lucy Dathan and Governor Ned Lamont stood on our front porch enjoying a slice of Hartford Election Cake.  The talk turned to both politics and government as well as cake.  A little while later, candidate for State Representative Fred Wilms also stopped by for some cake, a family catch-up, and a little politicking.

I’d invited both Dathan and Wilms to take part in the almost-forgotten tradition of election cake. In the last election, we took a cake to the League of Women Voters Forum at City Hall for the candidates to sample. With no public events this year, our local contestants graciously accepted an invitation to come to the house.

At the last minute, Dathan asked if the Governor could join us. Of course, I was delighted! 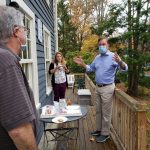 For a food-guy like me, it was a thrill to spend a half hour with Governor Ned Lamont.  Without any hoopla or entourage, he walked up the front yard, inquired about the historical plaque on our house, and delved into the backstory of Election Cake. I listened in as he and Dathan chatted about effective and helpful Connecticut department heads, obscure legislative committees, and the election issues important in the 142nd district.

For a few minutes, I was an insider.

Hartford Election Cake used to be a much-loved part of election day celebrations in the 18th and 19th centuries. In those days, voting was a cause for taking time off to enjoy some food and drink.  It was a happier occasion than the stressful frenzy that we have today. According to Gregg Mangan at ConnecticutHistory.org, “[Hartford] city residents hosted elaborate banquets where the dessert course consisted of coffee, hot cider, and a generous portion of Election Cake.” 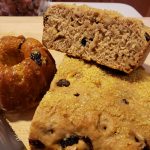 Mangan points out in his article that, “The popularity of Election Cake got a real boost from its publication in a reprint of Amelia Simmons’s recipe book, American Cookery, in 1800. Her recipe for Election Cake called for 30 quarts of flour, 10 pounds of butter, 14 pounds of sugar, 12 pounds of raisins, and 3 dozen eggs—an indication of the many mouths it was meant to feed.”  Those were the days.

Those kinds of festivities have been replaced by the school bake sale and Girl Scout cookie table at our polling places — not so much of a celebration as a grab-and-go reward for performing our civic duty.  Even those modest incentives are fading now with the complication of Covid 19. Many, like us, are casting their ballot by mail. No bake sale, no cookies, and no sticker, but still a bi-annual exercise in democracy. 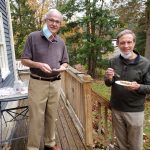 Frank and Fred sample the cake

Yeast-raised Election Cake is flavored with dried fruits, walnuts, and rum — the luxury ingredients of previous centuries — and spiced with the traditional New England flavors of allspice and cinnamon.  Rarely seen today, yeast-leavened cakes were the standard in the pre-baking powder era. I followed the method from AFamilyFeast.com, which website author Martha Pesa found in her mother’s recipe box.

Cinnamon and allspice are standard, but coriander, cloves and mace may also be included.  Nutmeg is a must, since Connecticut is the Nutmeg State. Knobs of nutmeg, looking a little like acorns, were common in the larders of the era – ready to be freshly grated when needed.

Dried fruits, another 17th and 18th century kitchen staple, were also a product of New England traders. Raisins and currants are the most commonly mentioned options. I included dried cranberries to add a tart native fruit to my raisins and sultanas. 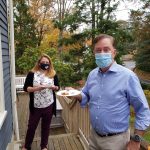 The sailors also brought home plenty of rum from their voyages.  The rich flavor of dark rum is the favorite for Election Cakes, but any spirit of the time would do.  Madeira, sherry, or port would all work.

Because it’s a yeast cake, making an Election Cake takes half a day, but most of the time is spent waiting for the cake to rise. After combining the ingredients into a wet dough, a two-hour proof is needed.  Next, fold in the fruit and nuts, scrape the batter into a “liberally buttered” pan, and let it rest for another hour to double in size.  Once the yeast has worked its magic, the final bake takes about 40 minutes.

Election cake is the clear descendant of English and European fruit cakes brought here by early settlers.  Governor Lamont had done a little reading up on Election Cake history, but wanted to know more about 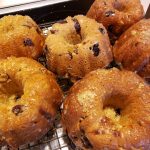 the ingredients.  Wilms immediately recognized the kinship between the cake and German Stollen, a traditional Christmas fruit cake with marzipan.  Dathan remarked on the rich yeasty flavor.

Since gathering on election day isn’t happening this year, personal size cakes seemed like a better idea.  We’re looking forward to sharing these with friends and neighbors for socially-distanced voting celebrations.

Next post From The Norwalk Hour: In Videos, Jacques Pepin Cooks with Charm, Flair, and Masterful Technique

Previous Article From The Norwalk Hour: An Online Taste of Rare Cheese