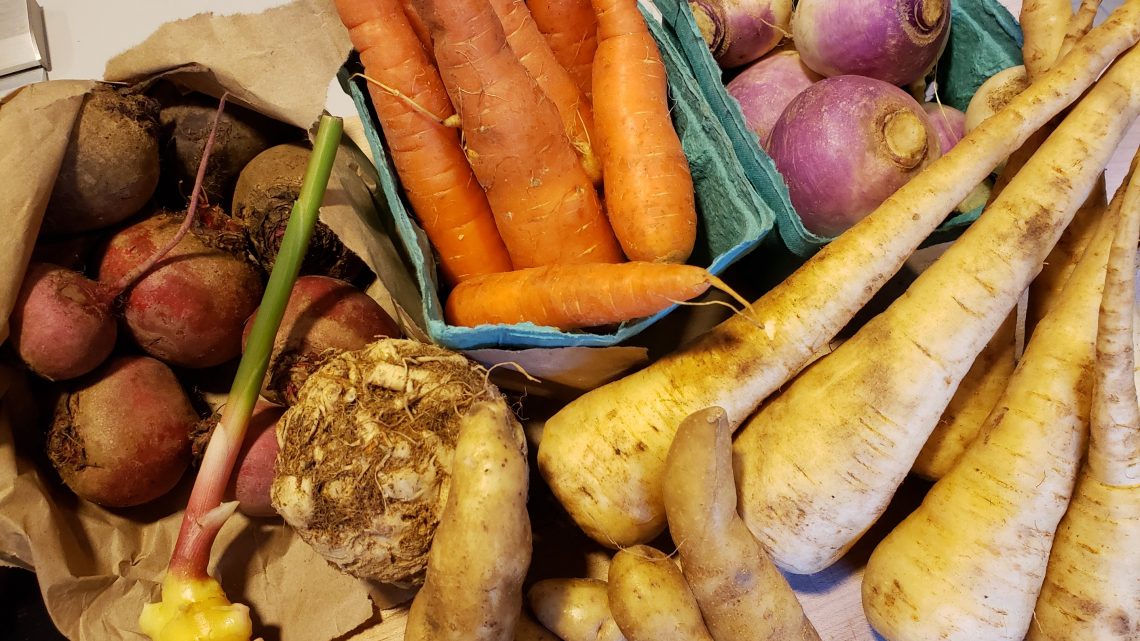 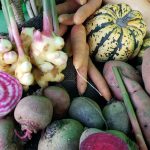 On an unexpectedly warm and sunny Indian-summer morning we strolled around the Westport Farmers Market. For the last day of the market’s outdoor season, the Fort Hill Farm display of late-season vegetables looked like a James Peale still life. You could see a few remnants of the summer garden, but it was the root vegetables that ruled the day.

Turnips, parsnips, celeriac, and rutabagas – they’re not as stylish as squash — colorful delicata and meaty acorn — or as anticipated as tomatoes and corn in July, but they’re right for this season.  As the days darken and the chill settles in, a fragrant simmering pot with these hearty, freshly-dug roots are just the thing. 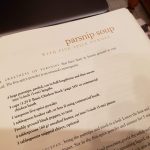 Marsha and I have always had a yen for these old-fashioned veggies.  The cream-colored parships with broad shoulders that taper down to a fine point have been a favorite of Marsha’s since college days.  On the farm where she lived, after the first frost the parsnips came right to the pot sweet from the ground.

Root vegetables make super soups. Marsha is the soup cook in our house.  Barbara Kafka’s book “Soup, a way of life” is her first look for ideas. This week the parsnips were simmered with chinese five-spice powder for a quick and easy soup. Our five-spice blend added sweet cinnamon, clove, fennel, a little heat from cayenne and a floating star anise pod.

We’ve also enjoyed thinly sliced parsnips chips — crunchy from a stint in a hot oven. Toss them with a high-smoke-point oil and bake until crisp. Great as a snack, they’re also a natural garnish for the soup. 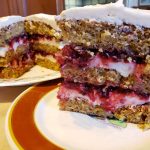 Parsnips can also make an appearance on the dessert menu with Dorie Greenspan’s three-layer parsnip cake — a close cousin of the always-popular carrot cake.  Fragrant with orange, ginger, coriander, and vanilla, it’s laced with shreds of sweet parsnip.  The orange-ginger cranberry jam between the layers is a snap to make and adds a contrasting tang to the rich cream cheese icing.  It’s a somewhat complicated and showy presentation. Don’t forget to flour the pans like I did. Fortunately the icing covered most of the damage.

Despite an intimidating appearance, celeriac (celery root) makes another excellent and easily-prepared soup.  An earthy celery aroma rises as the bulb is peeled and diced. Simmer it in a rich chicken stock until tender, season with salt and pepper and finish the purée with some enriching cream. That’s it. 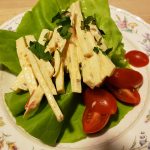 The French cut celery root into fine matchsticks for the classic celeriac remoulade — a slaw tossed with mayonnaise, mustard, and lemon juice. It also makes an excellent mash or purée seasoned with plenty of butter and cream, same as potatoes. Roast celeriac whole or in chunks with plenty of olive oil and season it with herbs, nuts, or garlic for a tasty side.

Turnips are another out-of-fashion root vegetable.  Roasted, sautéed, or mashed, in a pot pie, a gratin, or a stew, they add a sweet and peppery accent to many recipes. Bitter when raw, turnips cook up as a flavorful potato replacement or as a stand-alone dish.

Potatoes (actually tubers) and carrots of all sizes and colors are in their peak season too.  While they’re available year round, these roots are at their sweetest now, right out of the field.  The fall carrots just beg 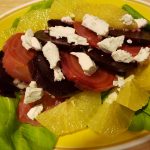 to be added to a stew. Freshly dug potatoes are a revelation — juicy when cut open with real potato flavor that is lost in cold-storage spuds.

Beets are in high season now — available in shades of red and gold, or patterns of both.  They’re easily roasted and then ready for a variety of uses. Alternating slices on lettuce leaves with orange sections, goat cheese, and a citrus vinaigrette is always a winner. With a supply on hand, they can be diced onto any lunch salad plate for color and flavor.

This is the season to turn a bunch of beets into a hearty borscht.  The soup can be vegetarian or not, but it’s always bright red from the beets. 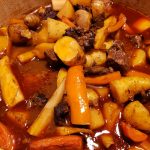 A nourishing beef stew is the meeting place for any combination of root vegetables. Dice them up. Toss them in.  Each spoonful conjures up the painterly display on the farmstand table.  Our recipe from thekitchen.com included a seasonal mix of carrots, fingerling potatoes, rutabaga, and parsnips simmered in beef stock and red wine.

In our 1840 house, there’s a corner of the original low-ceilinged basement that was the root cellar. In this cool dry spot, root vegetables wintered over, ready to be used as needed.  They were an important winter staple back then.  Luckily, we don’t need them for their keeping qualities anymore. Their rich flavor and adaptability are ours to enjoy all season long.

If you know anyone who would enjoy reading Frank’s columns, please invite them to FranksFeast.com to sigh up. Thanks!

Next post From The Norwalk Hour: A One-of-a-Kind Thanksgiving