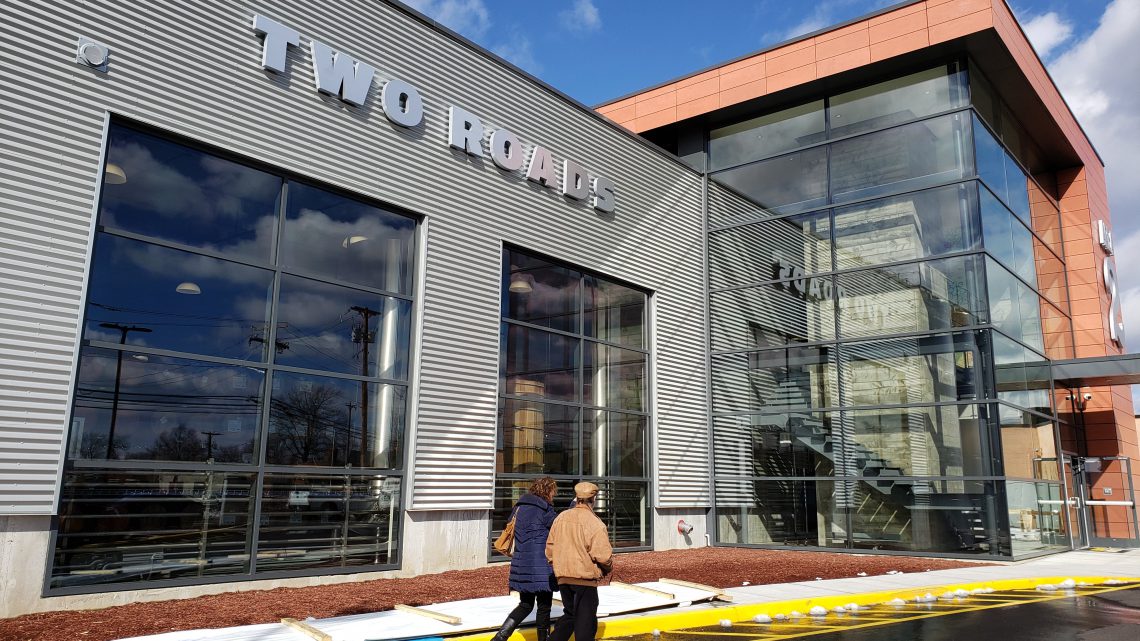 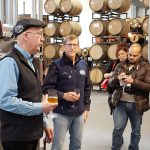 Phil Markowski (in hat) at the new brewery

Change is the only certainty in the craft beer business.  There’s an ongoing quest for new flavors, a thirst to try little-known beer styles, and curiosity about how far the envelope can be pushed.  Just ask Phil Markowski, the head brewer at Two Roads Brewing in Stratford. With his brand new brewery, Area Two Experimental Brewing, he’s like a kid in a candy store.

Small scale brewers are constantly innovating and changing their beer lineup to keep up with craft trends and the preferences of their customers. Brewers like Markowski are by nature tinkerers, trying new flavors and styles to hold the interest and attention of their community, while keeping an eye out for the next big thing. 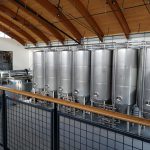 Two Roads is one of the most successful innovators on the local craft brew scene. Just open since 2012, it’s the largest craft brewer in Connecticut and has run the table with a string of popular and well-made beers, both mainstream and original.

The tasting room at Area Two will open on March 11.  The scratch-built facility, next door to the original Two Roads brew house, is a dazzling display of gleaming stainless tanks and piping, alongside historic wooden foudres and racks of barrels, full of maturing beers. 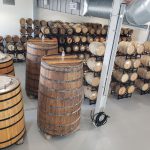 I was lucky to have a pre-opening peek of Area Two. A line of seven gleaming tanks, each as big as a dairy farm silo, connected by a maze of stainless steel piping, line the right hand wall.  On the opposite side, it looks like a winery stacked with wooden barrels full of aging beer.

The brewery floor is spanned by an overhead catwalk almost two stories up that leads from the entrance to the stylish tasting room.  Reclaimed-wood tables and stools point toward the bar. Hand-carved hardwood tap handles turn on the flow of specialty beers. The living green wall behind the taps is a symbol of the sustainable ethic of the new brewery. 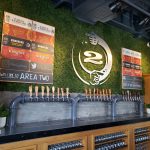 Windows to the right overlook the brewery floor. To the left the view is of a soon-to-be-restored wetland and the Area Two cool ship – one of just a few in the United States.

Custom designed by Markowski, the cool ship is a large open tank looking like a shiny kiddie pool where warm wort is pumped for cooling. It’s housed in an unheated building open to the outdoors so that wild yeast will ferment the wort into beer after cooling – a traditional method still used in Belgium.  When you see clouds of steam rising in front of the tasting room windows, the cool ship is full. 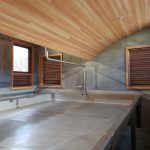 In addition to wild yeast beers, Markowski’s aim is to make a range of sour beers, barrel aged beers, and lambics.  They’re a long way from IPAs, lagers, and pilsners, but these beers are the hottest trends in craft brewing now – tart, refreshing, adult beverages.

A tangy sour beer soaking on a metric ton of tart cherries was drawn right from the barrel for us to sample on the tour.  A bright cherry-red color, it was just beginning its six months of rest. 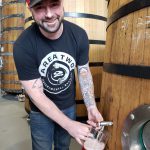 Cherry sour beer from the drawn from the barrel

Our first taste of Area Two beer was Table Terroir, a dry, refreshing, full-flavored ale.  It’s made with Connecticut grown malt and hops and fermented with yeast gathered from Two Road’s own Hop Yard next to the brewery.  It was delicious and at only 3.7% alcohol you could easily enjoy another.

Blood Peach Lambic, a Belgian sour style, had the pink blush of a rosé wine. Tart with fresh peach flavor and classic lambic funk notes, it had been aged for two years in oak barrels.  I could drink this all day long, by itself or with any food where you would serve a crisp, fruity white wine.

The lemony tartness of Whiskey Sour’d develops after a year in bourbon barrels.  More sour than the classic cocktail, it would be a delightful match with any seafood. 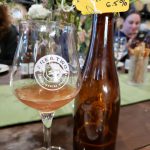 Area Two beers are naturals with food as we learned at the tour-ending beer-pairing lunch. A naturally tart and salty Gose beer flavored with lime had been aged in tequila barrels for a margarita-like companion to lemongrass shrimp poke.

Tender braised beef short ribs were paired with two beers both aged in foudres – tall wooden barrels the size of a minivan standing on end – holding hundreds of gallons. Calva – a complex, appley, sour beer – was aged in a French foudre previously used for Calvados apple brandy.  Brett Noir combines a sour beer with pinot noir grapes and the famously funky brett yeast for nine months of aging in oak foudres brought from the Napa Valley. 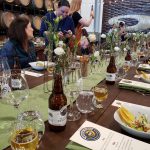 The Area Two tasting room taps will open on March 11.  I’m hoping to become a regular, so I can see where Phil Markowski’s beer imagination is going next. 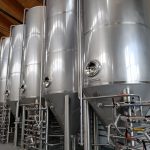 Next post From The Norwalk Hour: Fresh local seafood on the water in Rowayton