From The Norwalk Hour: Fresh local seafood on the water in Rowayton 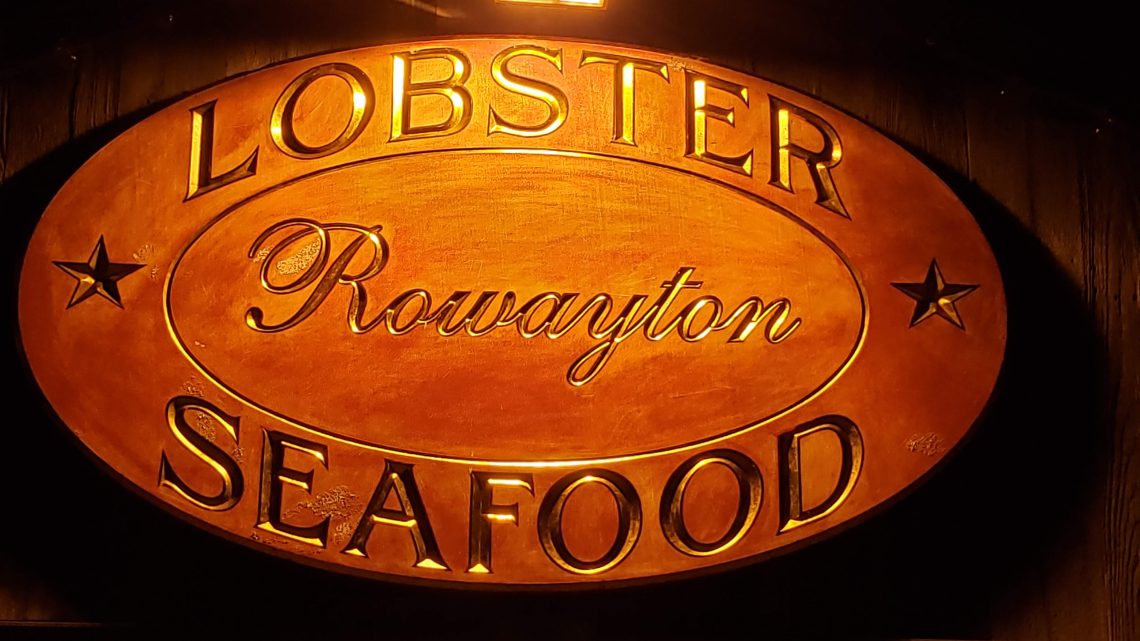 When I first knew Kevin Conroy, he wore waterproof overalls that came up to his armpits, rubber fisherman boots, and a knit hat. He would pluck lobsters out of the saltwater tanks at his Rowayton Seafood store and accurately gauge their weight to the nearest eighth pound just by holding them. That was a few decades ago. 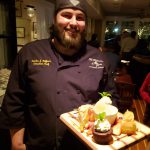 Since then, he’s become the proprietor of The Restaurant at Rowayton Seafood, a significant presence in the Rowayton business community, and an advocate for sustainable seafood.  The Restaurant is one of the most popular waterside spots on the Connecticut coast. And now, after a time of wholesale only, the namesake retail seafood store is open again.

The Restaurant thrives on selling seafood, much of it supplied by local commercial fishermen. With the arrival of Chef Charles Hoffman, a native of New Orleans, the already eclectic menu has been updated with some “Big Easy” style. 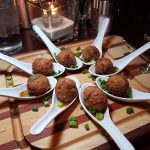 Hoffman got to show off some of his favorites at a recent tasting dinner. He described an amuse bouche of creole calas as somewhere between a rice fritter and a delta arancini.  The light-as-a-feather rice ball flavored with andouille sausage and scallion was well set off with a tangy sweet and sour cane syrup gastrique (a reduction of sugar and vinegar).

Drunken shrimp ($30), seasoned with fennel and pepper, and sautéed with cherry tomatoes are heaped over a rice timbale – a favorite dish Hoffman brought with him from New Orleans. Bananas Foster cheesecake is another import from NOLA – sweet, boozy, and irresistible. 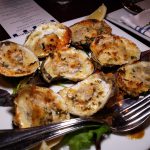 Coastal cuisine is everywhere on The Restaurant’s menu. Both charred octopus (18) with olives and charred peppers and truffled Maine lobster mac & cheese (18) are perennial favorites. 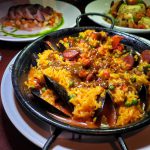 I’m a sucker for any savory dish cooked with rice that soaks up the flavors. The essence of Maine lobster, mussels, chorizo, and roasted red peppers infused the saffron rice of a steaming paella (35).  I was happy to leave the shellfish to others and just scoop up the succulent rice.

Neither seafood nor from NOLA, the pan-seared Hudson Valley duck breast (35) was still a chef’s favorite and deservedly so. It’s hard to get that crispy skin, render out the fat, and keep the meat rosy-pink and tender – but he did it. The sliced breast rode in on a bed of toasted hazelnuts, roasted celery root, and butternut squash all sauced with a swoosh of bourbon and macoun apple reduction. 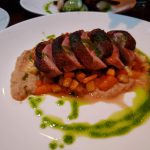 It’s hard to match a wine with all these flavors, but wine experts say that a crisp, dry sparkling wine goes with almost anything.  I tried a delightful Gerard Bertrand sparkling rosé (15) and I think they’re right.

The coastal-cool decor is just what you want in a waterside eatery: lots of windows, beachy colors, and nautical touches.  Some walls are papered with nautical charts of local waters. With the time change and longer days, the view of the Five Mile River will be a main attraction.  But even after sunset, the restaurant is a warm, cozy refuge. 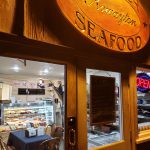 The Restaurant was originally an offshoot of the Rowayton Seafood Market, and was named as such. Closed to the public for years, the Market, just across the parking lot, has reopened – selling fresh fish and clam shack cooking. There’s a small table for eating in, but the focus is on take out or take home.

Fixing dinner at home? Stock up on the impeccably fresh fish and some salads, sides, and snacks.

For take out, steamed and fried shellfish is a mainstay of the menu, but you can get a lobster roll, chicken fingers, or even a burger.  When the weather turns warm, I’m sure you can find a spot along the water to enjoy a freshly cooked picnic. 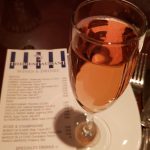 Conroy is committed to working with a community of local and regional seafood suppliers: dock to dinner – a variation on farm to table. A quick glance at the menu highlights Canada, Maine, Long Island, and the Chesapeake as well as Norwalk’s Copps Island Oysters.

On March 21, Chef Hoffman and Conoy are hosting a Sustainable Seafood Dinner ($100) at Wakeman Town Farm in Westport.  It will be a chance to celebrate our coastal culture, learn about seafood sources, and – oh yes –  eat very well.

Next post From The Norwalk Hour: A taste of Britain, no passport required