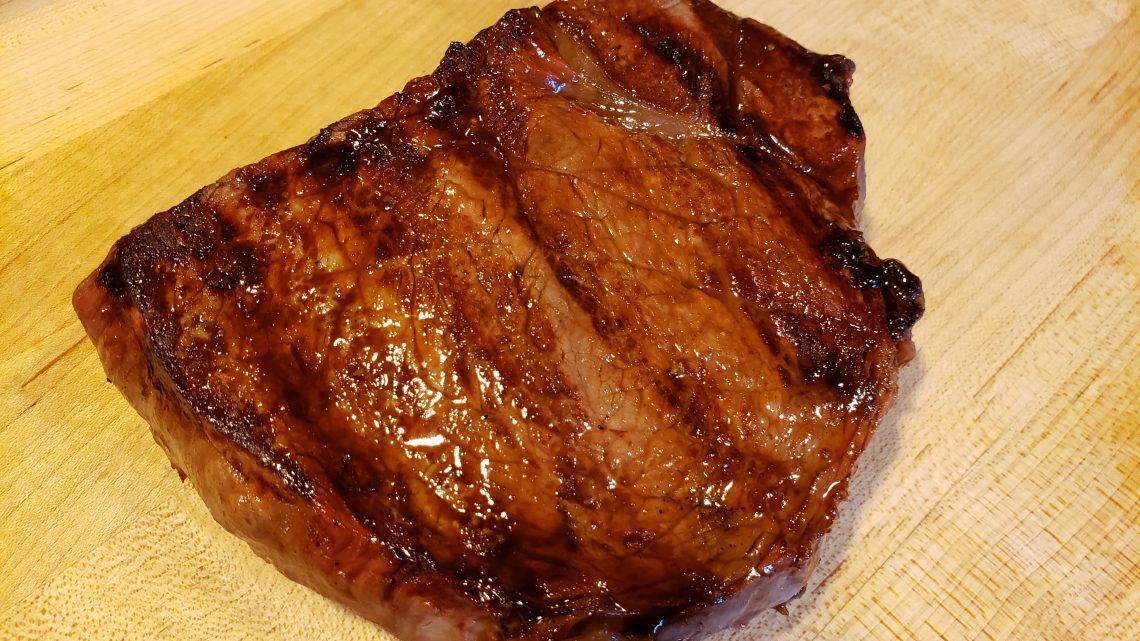 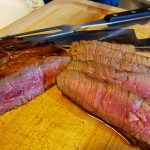 With a dark, rich, mahogany brown, and slightly-darker diagonal grill marks showing, the thick steak rested from its stint on the grill.  My carving knife in hand and fingers crossed, I sliced in the hope that it would be a rosy pink inside. After the first few cuts, I knew that it was just right — a perfect medium-rare.

It’s given me my best grilling season so far in a lifetime of backyard cooking.  It hasn’t always been this way.  There have been plenty of failures in the past.

Last year I made the move from charcoal to gas. What I gave up in flavor and smoke, I gained in temperature control. My apologies to purists, but gas is a lot easier too.

So much grilling advice begins with the instruction to build the fire to one side of the grill for a hot and cool side —  a sketchy proposition at best. That pile of coals always gives an uneven heat, hotter in the mounded center and cooler at the sparse edges.  It’s often too hot, resulting in a char bordering on burned, while the cool side suffers from the opposite uneven temperature. 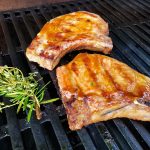 My grill has three burners, allowing for combinations of high and low heat to cook almost any food. For the steak, I seared over high heat on one set of burners, then set the steak in the middle while the two end units were set to medium.  With this arrangement I was able to keep the temperature around 400 without burning. Generous brushing of a sherry vinegar and soy sauce glaze burnished the meat with added flavor.

The same approach is a winner with pork chops. Since they are cooked all the way through, there’s more time on the fire to get that sought-after color and grilled flavor.

Steak has to be thick enough to do well on the grill. Color and flavor develop over the heat with time.  A thin steak (or chop or fillet for that matter) cooks too quickly to get the full benefit of grilling.  Without that flavorful grill-induced crust, you might as well have cooked inside. 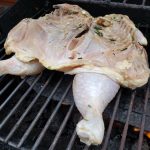 Grilling a whole chicken is a tricky business. It takes a while and, with too much heat, can turn the bird into a charcoal tasting cinder on the outside while still red at the joints.

If you spatchcock the chicken, it will lay flat and present a more even thickness to the fire. Cut out the backbone and then, with the skin side down, press the chicken until the breast bone cracks and it lays flat. Clare De Boer, in the New York Times, suggests slashing the chicken through the breast and thighs to let the heat penetrate the meat and even out the cooking. It works.  The chicken is browned, not burned. 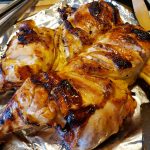 An oily marinade will cause the fire to flare when the bird hits the grill, charring instead of browning the skin.  I like to marinate the chicken with just lemon juice, garlic and herbs. Depending on the weight, it will take around 45 minutes to cook. Give it some heat for the first 10 to brown, then use indirect heat, just like the steak, to finish. If you like the added flavor of barbecue sauce, wait till the last 10 minutes to slather it on.

And, oh yes, pay attention! You can’t leave the bird to cook on its own. A glass of wine (Pinot Noir with the chicken for me) will help to pass the time.

Salmon is a different story.  Fillets of fish tend to stick to the grill, fall apart, and make a mess.  (Swordfish and other steak fish are the exception.)  Fortunately, the Pacific Northwest natives solved this 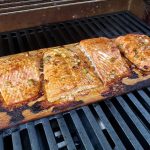 problem centuries ago by cooking the fish on a cedar plank. Back in the day, the fish would be attached to a plank which would be stood on-end facing the fire to cook.

Now, thin cedar boards are available where grills are sold, ready for use. Soak the board in water for the steamy smoke you want.  Some methods suggest putting the board on the fire to let it get hot and start to char and smoke before putting on the fish. Others put the fish on first.

Thickness of the fish and the cooking time would be important here. For quick cooking I would start the wood first. This is the time for direct heat, but with some control. 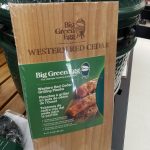 It’s common practice to brush grilled salmon with a sweet honey or brown sugar marinade.  I can’t see it myself – the sweetness just doesn’t seem right. After all, we usually spritz some tart lemon on fish, don’t we? I found a savory marinade that included soy sauce, ginger, garlic and a dash of exotic sesame oil.

The fourth of July kicks off the backyard grilling season.  Cooking and eating around the grill is a great way to get together in the socially distanced era — six feet apart of course. 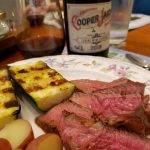 Eating well off the grill

Previous Article From The Norwalk Hour: The Pick-Your-Own Farm Season Kicks Off at Jones Family Farm

From The Norwalk Hour: The Magic of Mayo