I came around the corner with a platter full of salmon to see smoke pouring from every opening of the closed grill. Flames surged up when I lifted the lid.

And then the trouble began. 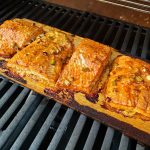 Fish is hard to grill; it tends to stick and break apart. A cedar plank is my answer to the problem. It adds flavor, has a smooth flat surface, and is cleaned up by disposal. Unfortunately, it can also catch fire.

I offer no excuses, except I will say that I was on vacation and cooking on unfamiliar equipment.  Each grill seems to have its own personality. This one was hotter than I expected.

Cedar planks need to be soaked in water for at least an hour before cooking, rendering them less combustible and more smoky.  The instructions advise preheating them on the grill for 10 or so minutes 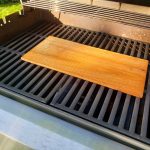 to develop some smoke before cooking.  I’ve often done this and know it can work.

Overconfident, I left the grill on high and walked away. A series of events developed from this one act that were stressful at the time, but now bring to mind a Buster Keaton slapstick act – one mishap leading to another even more dire.

I’ll confess now that I left the planks alone a little longer than I should have. It had started to drizzle and I dawdled inside complaining that the rain would dilute my wine. (A glass of wine is an essential grilling ingredient, don’t you think?)

Staring at the cedar-plank inferno, I struggled to develop a plan of action. With nothing to tamp down the growing flames, water was the only answer. Sadly, I was on a deck a long way from any faucet.  As I hustled around the back of the house, through the screen door, across the porch, into the living room and on to the kitchen, I began to feel like a character in one of Keaton’s routines.

After drowning the flames, I had to get rid of the still-smoldering planks while the drizzle intensified, bathing the waiting salmon filets. Realizing that the rain was my ally, I pitched the crumbling wood over the deck rail to the increasingly wet grass below.

Now, what about dinner?

I turned the heat down, put two more unsoaked planks on the grill, and slid the fish on top. In my agitated state, I thought careful attention would keep fire at bay, and then went back the long route to the house for an umbrella.

Just a minute later the unsoaked planks were aflame, the drizzle had turned to rain, and the wine had turned to water.  I now had only one hand for the job, the other managing a golf-size umbrella.  I shoveled the fish to the grill and tossed those planks to the ground as the drizzle became a downpour.

The grilling was over. 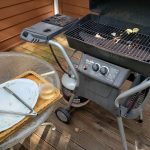 The mess in the morning

With the umbrella between my shoulder and chin, balancing a tray in one hand and a spatula in the other, I wrestled the fish from the sticky grill onto the tray.  Both hands were full, so I had to rap on the window for help opening the door. Those inside say that this might have been the peak comedic moment.

I shoved the pan of fish into an already hot oven, took a deep breath and then poured a fresh glass of Riesling. Things were coming back under control and it looked like there might be dinner after all.

Ten minutes later everyone got one final laugh when the fish came out of the oven.  On the pan was my well-roasted kitchen spatula.  The blessedly sturdy handle had not melted at 425°.

Everyone agreed that the “grilled” salmon had the desired smokey cedar-planked flavor and was cooked to ideal doneness despite the calamity.

I wouldn’t attempt to duplicate this grilling method, although it might make an entertaining slapstick video. If anyone wants the rights, get in touch. I have some suggestions about who could play my part.

Next post From Sunday Arts and Style: Good eating, fun shopping, and a tugboat in Kingston, NY