From The Norwalk Hour: Taking a Drive for a Fall Foliage Lunch 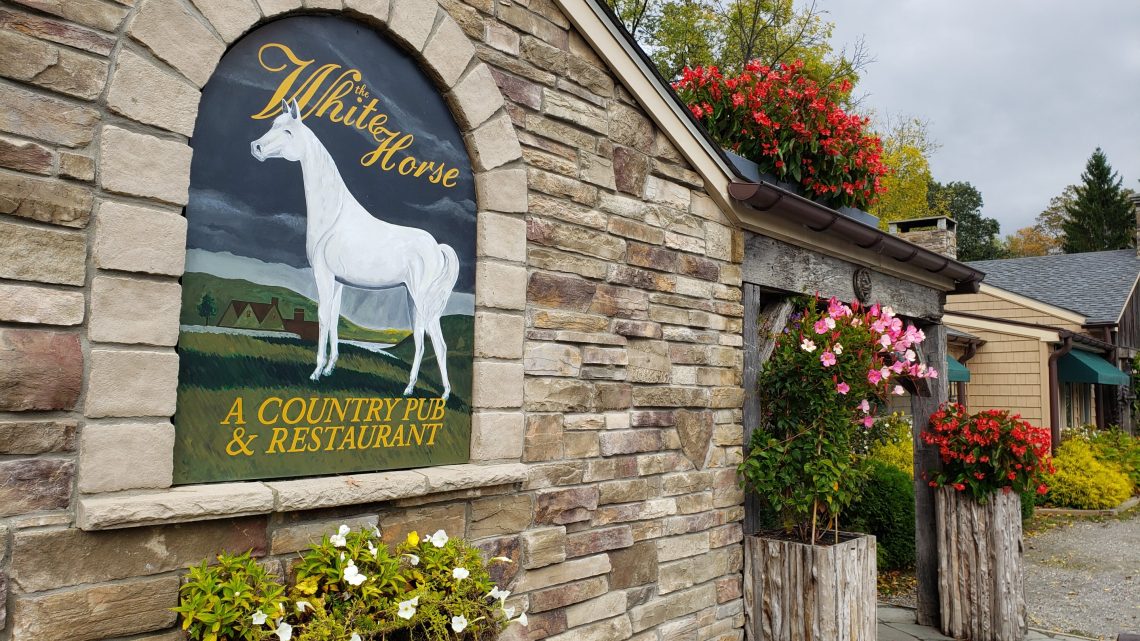 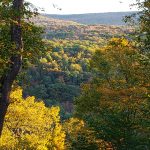 It’s that time of year again!  Time to appreciate the beautiful New England fall color on a country drive. People travel from all over the country and the world to see our region at this time of the year.  Aren’t we lucky to have it right here in our backyard?

Any day now the trees will begin to brighten up with fall color. I understand that the weather and rainfall have been right this year, and the color should be good.

It’s easy for us to take this spectacular natural display for granted, even to grumble a little about the onerous fall cleanup of yards and gutters, but Marsha and I like to set aside some time, pick a route, and motor through the countryside enjoying the colorful show. A lunch destination gives some purpose and structure to the drive.

The leaves turn color first to the north and at higher elevations. For Connecticut that means the northeast “quiet corner” kicks off the season in early October. The northwest, up the Housatonic Valley, turns next in mid month, and finally the warmer coastal regions come along last, even stretching into November some years.  In a good year, we get a whole month of color, maybe even more, if you go looking for it. 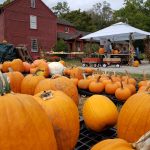 The Merritt Parkway, designated as a National Scenic Byway and listed in the National Register of Historic Places, is a beautiful drive that we often overlook. Make a loop up the Merritt, north on Rt-8 to Waterbury, west on I-84 to Rt-6 and the Good News Cafe in Woodbury.  After lunch I’d go west on I-84 to charming Newtown and then meander over the back roads, down Rt-53, and back home.

Later in the season, a drive up the coast is a good bet.  Head for lunch at the Griswold Inn in Essex or wine tasting and lunch at Chamard Bistro and Winery in Clinton. Including a wander up the lovely Connecticut River Valley is icing on the cake.

Recently we headed straight up Rt-7 — a long-standing Connecticut leaf-peeping favorite.  This trip has been popular ever since the Sunday drive era and has plenty of good lunch stops along the way. It can be a little crowded on weekends, particularly if the weather is fine. Our reservation was at The White Horse, a much praised country pub and restaurant in New Preston, CT. 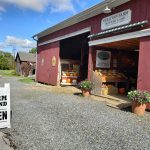 The Wilton Historical Society set things up with its bright orange pumpkins from the Kiwanis Club sale against dark red historic buildings.  Not foliage, it was still the kind of seasonal color we wanted. Rt-7 has become densely commercial, but north of I-84 and into Brookfield the countryside opens up.

Our GPS directed us off Rt-7 on to Still River Drive for an unexpected ride along the beautiful Housatonic River to New Milford.  The hills were just beginning to blush with the promise of fall color to come. We pulled off at the Sullivan Farm for a photo opp just before lunch. 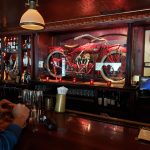 The White Horse Country Pub, beautifully done up in flowering plants, sits close to the road in New Preston. To the left as you enter, the dining room overlooks a fast flowing stream. In the pub, to the right, there’s a 1920 Indian Scout motorcycle on display behind the bar and cozy seating by the stone fireplace.

The five-page menu is extensive with an emphasis on English specialties. Savory shepherd’s pie ($15.75) comes under a mashed potato crust. A pastry horse stands astride a pasture of puff pastry atop the hearty chicken pot pie (16.75). Fish and chips (16) seemed popular at other tables.  Choose from bangers and mash or chicken tikka masala for additional authentic British Empire fare. 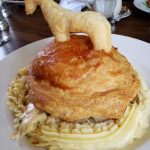 As you would expect at a pub, there’s a dozen burger choices including some made with the house blend of sirloin, brisket, and short rib meat and others with 100% Kobe style beef.  Fifteen creative sandwiches include original ideas like pressed ham and pear, black truffle meatloaf, and drunken croque monsieur. Prices are reasonable ranging from $9 to $14.

The dessert menu offered banoffi pie and sticky toffee pudding from the British Isles plus a full slate of American favorites. Coffee was poured from a redware pitcher into a custom logo cup with a miniature milk can for cream — just one example of the attention to detail that sets The White Horse apart. 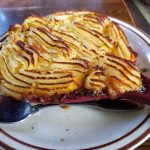 After lunch we headed north then made a quick U-turn after spying the Stars Hollow Yarns knitting store. These kinds of drives are all about serendipitous finds and unexpected stops.

From Marbledale we headed north and west, passing through New Preston and driving along lake Waramaug.  From there, Rt-7 heads south for a pretty drive home, or turn right and keep going into the forested hills to explore the picturesque farms, charming villages, and winding back roads of Northwest Connecticut and eastern New York.  You may not want to come back. 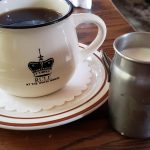 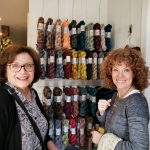 Next post From The Norwalk Hour: Cheese is in Season Right Now