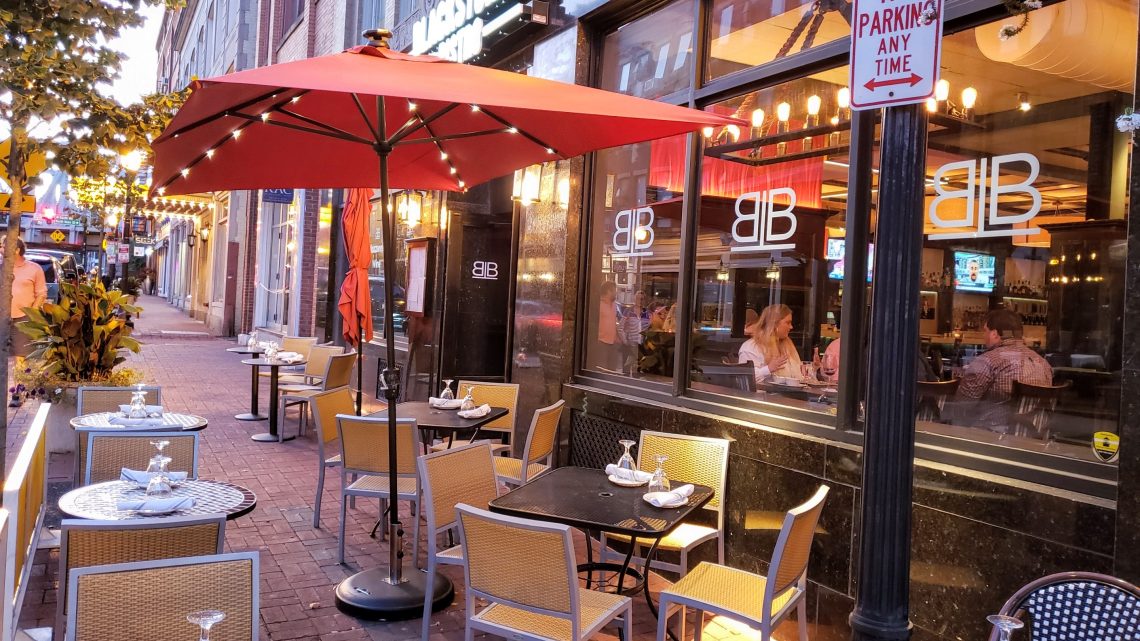 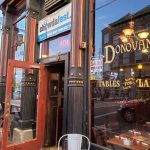 It’s been a while since we headed down to Washington Street in SoNo just to take in the scene. Usually we go with dinner reservations, bent on a particular destination.  But on a warm early-fall evening last week, with no plan in mind, a stroll to scope out the restaurants seemed like plan enough.

From the iconic SoNo sign under the railroad bridge to the Norwalk River drawbridge, up one side of the street and down the other, we began to inventory the restaurants. The surprising census added up to twenty one places to eat on that short stretch. 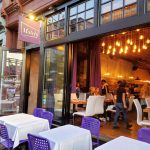 With appetites whetted and thirst building we had to choose one. It wasn’t easy.

Some establishments are old timers. Donavan’s leads that category with a story that began long before the gentrification of South Norwalk to SoNo. Match, consistently on the lists of the best restaurants in Fairfield County, is the patriarch of the new generation.

There’s American food at Harlan Publik and Local, Steak at Washington Prime and Blackstone’s Bistro, and seafood at the Saltwater Grill. Italy is well represented with both an 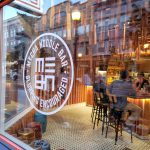 extensive menu at il Posto and pizza at Slice of Italy. You can find Asian flavors at Mecha Noodle Bar, Szechuan, and Oishi.  Wine is the emphasis at Tablao and Public Wine Bar. Street food from around the world is on the menu at El Segundo.

Harder to categorize but equally interesting are Bubbly’s for an eclectic mix of bubble tea, ice cream, and crêpes and Pokemoto for that Hawaiian marinated-fish specialty.  There’s Mexican, of course, at Banditos, a location that seems to have always had a Mexican eatery. The Iron Brewing Company and Our House dive bar emphasize drinks. 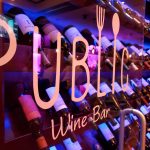 Thirst won out and took us to Public Wine Bar. Like most of the Washington Street restaurants, it had a few tables outside, but the stylish and quiet inside was for us.  Just inside the door is a floor-to-ceiling wine display. The bar, to the right, faces an exposed brick wall. Some tables in the front are almost outside. In the back it’s quieter, the tables are set with white table cloths, and a there’s a leather banquette along the wall.  Fairly new to the street, Public occupies the former space of Estia, an excellent Greek restaurant that didn’t stick 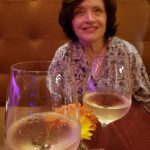 As expected, there were a couple dozen well-chosen wines by the glass. Marsha picked a rich white Bordeaux. I went for a crisper Washington State riesling. The high-end long-stem glassware held a generous pour.

We hit a weeknight when a three-course menu is offered (Sunday through Thursday). Our server advised that it’s a great deal at $29 if you’re hungry. We were.

I took a chance on the caprese salad in the hopes that they were getting some late-season vine-ripened tomatoes. Jackpot!  The slices of ripe, flavorful, yellow tomatoes were interleaved with fresh mozzarella and drizzled with balsamic. 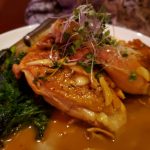 Marsha’s spicy salmon tartar was coarsely chopped and mixed with a zingy blend of lemon aioli, jalapeño, and cilantro.  Crisp yucca chips, arranged around the tartar like the petals of a flower, were crunchy, salty scoops.

We were off to a good start.

Moist and tender slow-roasted chicken came with buttery garlic-mashed potatoes, sautéed kale, and an excellent pan gravy.  With the first forkful of chicken and wild mushroom pappardelle, the woodsy flavor exploded in my mouth. The sauce, with hints of truffle and fresh herbs, clung to the wide noodles. Chunks of shredded chicken right off the bone were tender and added texture to the dish. 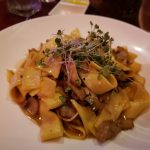 We shared a glass of a restrained pinot noir from France with the mains.  As it should be in a wine bar, the red wine glass was a different shape than for whites.

Dessert was not an option in the prix fixe menu, otherwise we might have skipped it. Instead some fresh berries and a couple of profiteroles finished off dinner.

Service was excellent. At the end of our evening, we had a nice chat with a new manager, just up from Greenville, South Carolina.  Obviously a pro, we had watched him monitor the dining room all evening long.

Even though it’s a wine bar, there’s a good cocktail program at Public. I could overhear the bartender discussing drink options with his customers. Our server was knowledgeable about the wines and able to guide us to good choices. 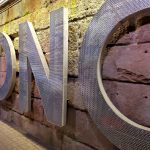 From our table we could watch the sidewalk traffic as others hurried to reservations, or, like us, were cruising for inspiration.  The crowd was as diverse as any you’ll find in the area. The broad range of Washington Street restaurants cast a wide net.

On our pre-diner stroll, I overheard some stylishly turned out couples chatting about the Washington Street restaurant scene.  “Isn’t it great to have this here,” one said to the other. She got that right!

Next post From The Norwalk Hour: Taking a Drive for a Fall Foliage Lunch