From The Norwalk Hour: Castles, Villages, and Rhine Wine 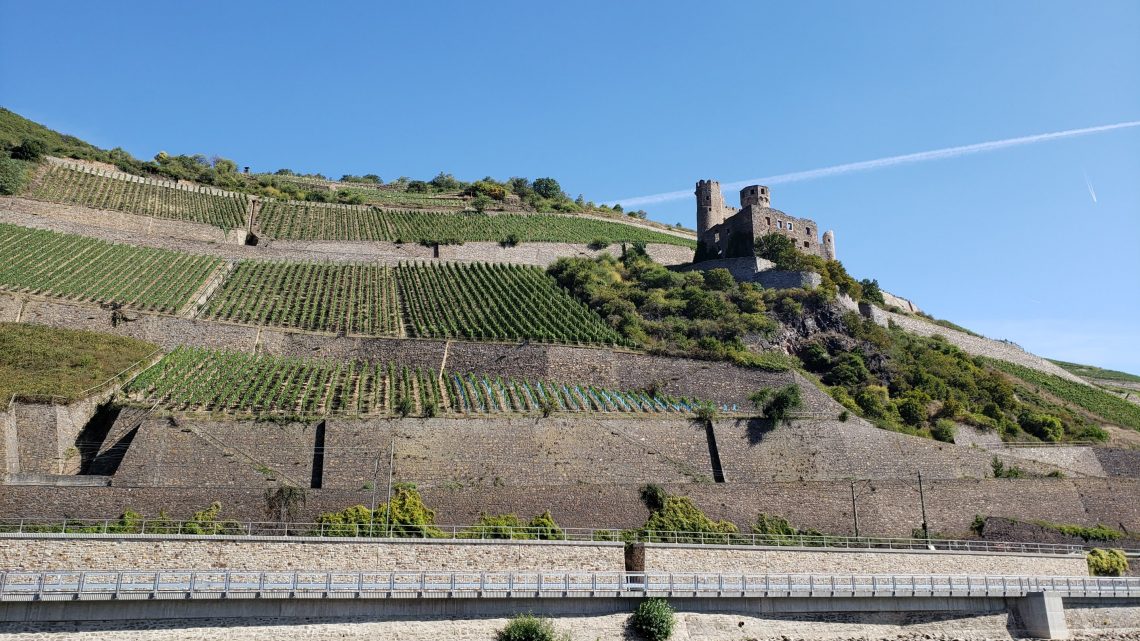 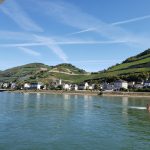 The Rheingau vineyards rose up from the river on rolling hills and steep terraces as our tour boat motored generally northwest on the meandering Rhine River. The picturesque rows of Riesling vines, downstream from the old Roman city of Wiesbaden, scrolled by like a romantic movie.

Riesling, one of the world’s great wine grapes, is grown around the globe, but the vineyards along the Rhine are the original source.  The vines here have been tended since Roman times. The wine, made in all styles from dry and delicate to sweet and floral and everything in between, used to be known simply as Rhine wine.   The Rheingau is a source for some of the most sought after wines in the world as well as the house pour for local restaurants.

As you drive on the A-66 from Wiesbaden toward the river, a few vineyards begin to appear on the hillsides. The highway takes a sweeping curve to the right and narrows to just two broad lanes, each wide enough so you can slip by a narrow vineyard tractor.  The name changes to the B-42, and runs between the river on the left and the patchwork of vineyards on the right. 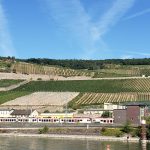 The vineyards at Rudesheim

The south-facing towns along the route are a roll call of the great names in Rheingau wines: Eltville, Erbach, Hattenheim, Oestrich, Johannisberg, Geisenheim, and Rüdesheim.  Large estates and local cooperatives are side by side. The vines are planted in a crazy quilt of rows, vying for the most sun in this cool-weather region.

There are plenty of places to stop and taste along the way.  In the past, we’ve enjoyed lunch at Schloss Johannisberg, seat of the von Metternich family.  Grapes have been grown on this famous hill for 1200 years. The current chateau, a former Benedictine abbey, was built in 1761.

But this time we were headed for Rüdesheim and the round trip day boat voyage to St. Goarshausen.  This section of the upper middle Rhine valley, a UNESCO World Heritage Site, is home to forty castles and fortresses, picturesque villages, and acre after acre of vineyards. 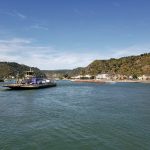 A barge and ferry pass on the Rhine

The river is a highway through Europe stretching from Rotterdam across Germany to Switzerland.  It’s thick with commercial traffic, mostly bulk carrier river barges, ships that carefully navigate the narrow turns.  They hail from Germany, Switzerland, France, and Holland. Many carry the name of the family who live aboard on their continuous journey up and down the river.   We passed a half dozen of the popular river cruise boats, called hotel boats by our German companion.

The swift and relentless current pushed our boat quickly down stream, but made it a bit of an uphill slog on the return trip. 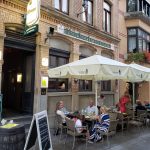 During our stay in Wiesbaden, the closest city to the Rheingau, we sought out long-established restaurants serving traditional food of the region.  Places including the Bäckerbrunnen and Weinhaus Kögler with lots of schnitzel, sausages, and sauerbraten on the menus. In early September Pfifferlinge (chanterelle) mushrooms are in season and featured on special menus.

In these restaurants all you have to do is ask for a glass riesling. The response is “Dry or half dry?” With close relationships to local producers, you can rely on the restaurant to have top-notch house wines. The snappy, dry Rieslings are aromatic, crisp, and bright. The half dry wines have a touch of sweetness balanced by refreshing acidity. We often ordered one of each and passed the glasses back and forth. 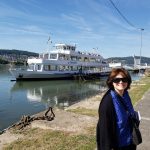 Marsha ready to board The Bingen

Our boat, the Bingen, hopscotched down the river stopping at charming towns on our route to pick up and drop off passengers.  Along the way we passed the famous Mouse Tower, ruined and restored castles, monuments, and the legendary Loreley, a high cliff marking a treacherous turn in the river. Below the town of Lorch the vineyards petered out as the river valley narrowed.

After returning to Rüdesheim we drove along the river back to Wiesbaden. At each village wineries are open for tasting and restaurants available for casual or fine dining. It’s a wine-lover’s paradise. There are numerous guides and maps for planning stops. 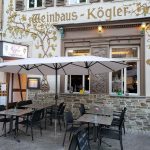 Getting back to Wiesbaden, we headed for the Weinhaus Kögler, a restaurant established in 1888 that specializes in local wines. At our table on the shady cobbled square, we shared two glasses of delicious, local dry Riesling from vineyards we passed on our drive: Johannisberger Erntebringer from the town of Ostrich-Winkle and Erbacher Jung from a little up stream in Erbach.

Rheingau wines are available in Connecticut, but you have to look for them. Or you can make a reservation at Rothbard Ale + Larder in Westport. There you’ll find the schnitzel, sausages, and spätzle that we enjoyed in Wiesbaden along with a broad selection of German beers and wines. 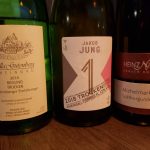 House wines at the Weinhaus Kögler

Next post From The Norwalk Hour: Good Eats on SoNo’s Washington Street

Previous Article From The Norwalk Hour: A Tasty Tour of Culinary Copenhagen