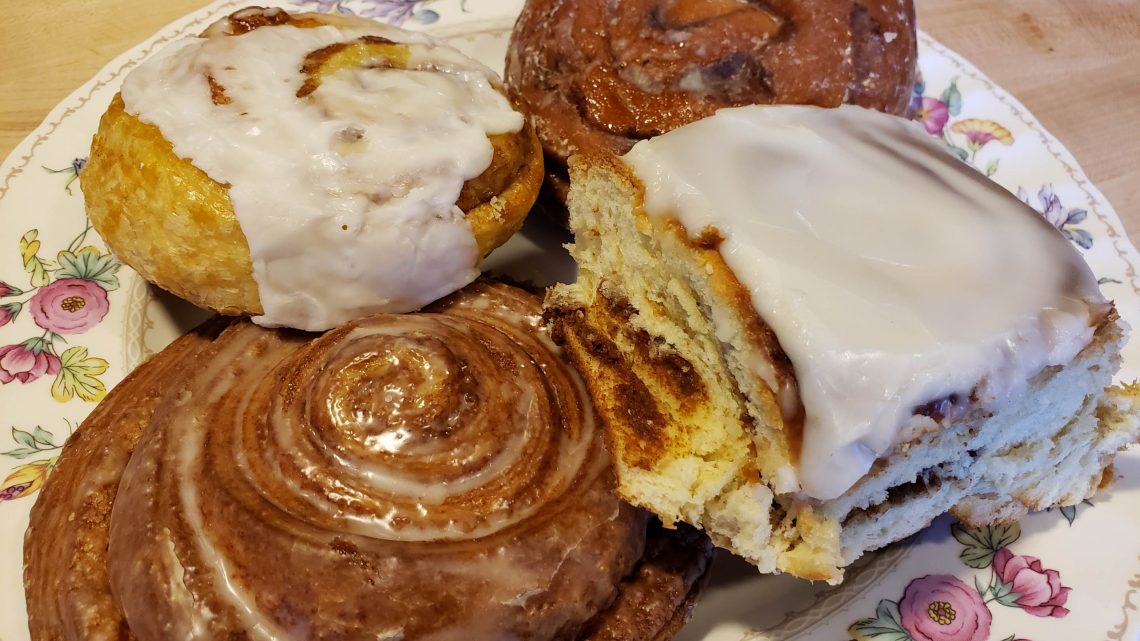 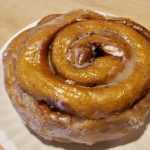 A cinnamon roll from Coffee An’ in Westport

“You have to try these cinnamon rolls from Coffee An’ in Westport.  We’ll pick some up on the way home from lunch today,” our friend Marsha Harris promised.

I’m not even sure how the topic of cinnamon rolls came up. They’re a favorite of mine and loved by almost everyone else according to my observation. Rolled into a pinwheel with cinnamon in the layers and a sugary icing on top, they’re a classic American bakery offering.

It turns out, though, that there is a wide range of styles, shapes, and flavors — all with their ardent adherents.

A home style roll from Panera

Bakery cinnamon rolls are usually free-standing golden-brown pinwheels rolled up around a buttery cinnamon filling. Home style, on the other hand, are usually taller, baked shoulder to shoulder in a high-sided pan so that the rolls need to be cut apart.  Only the flatish top shows a browned crust. Either way they’re finished with a white confectioners sugar icing or a translucent donut-style glaze.

Our friend’s comment inspired me to conduct an informal survey of local cinnamon rolls.  It seemed like a worthy project — calories be damned. She returned that afternoon with her prized sample from the Coffee an’ Donut Shop in Westport. About 6 inches across, it was a tight fit in a cake box. As you might expect from this source, it had a lot in common with a glazed donut: a similar flavor and texture with a clear glaze all improved with a sprinkle of cinnamon in the layers. Despite the generous portion, It didn’t last long. 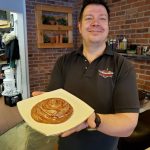 Norbert Dudas of Cafe Dolce with his European style roll.

The next morning I set out across Norwalk to collect more samples for my survey: an expedition down Main Avenue from Panera to Cafe Dolce, a pop-in at Dunkin Donuts, and a final stop at Liz-Sue Bagels II on New Canaan Avenue.  The diversity was surprising — no two were alike.

Cinnamon, long known in the ancient world and middle east, came to Europe in the age of exploration. Prized by the adventurers of the spice trade, it is the finely ground inner bark of trees grown in the far east. Its oils will infuse liquids with flavor, but the ground cinnamon will not dissolve. Although found in some savory recipes, it’s almost always paired with sugar.

Later that afternoon Marsha (my wife Marsha, not our friend Marsha) and I were joined by Diane, another cinnamon fan, to taste through our samples. 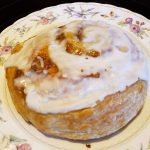 A roll from Liz-Sue Bagels II

Panera ($3.19) produced the most surprising example. It had to be cut out of its high-sided pan — a rare home style type. With tightly wound spiral and lots of cinnamon, it was one of the most flavorful rolls. The heavy coating of orange-flavored icing was a little too much sweet for me, but it was no hardship to finish it off.

Cafe Dolce ($2.75) had a more European-style (as you would expect from these master Hungarian bakers) — more pastry than dough.  It baked up into a dark, crispy spiral with a chewier texture. The moderately cinnamoned example was finished with a clear glaze.  (Try their walnut roll for another winner.) Not a traditional American cinnamon roll, it was a delicious pastry and a perennial favorite at the bakery. 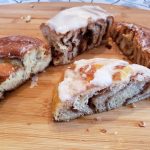 Cinnamon swirls inside the rolls

The Dunkin Donuts coffee roll ($1.89) was popular for its well-structured, toothsome, bready texture and minimalist glaze, but I wanted more cinnamon.

The example from Liz-Sue Bagels II ($2) was popular as the softest and “gooeyest” of the bunch.  (Gooeyness is an attribute sought by some aficionados.) Its yeast bread dough was softer, more like homemade. The cinnamon was moderate and the white icing applied with restraint.

Saturday morning granddaughter Moira and I headed out for more research.  At SoNo Baking the home-style deep-dish rolls ($4) hit a home run. The pillowy just-right dough found that sweet spot between melting and gooey.  The roll was well dressed with cinnamon and generously (but not overly) iced. I couldn’t get enough of this one. 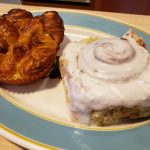 On the way home we stopped at Wave Hill Breads for some cinnamon monkey bread ($4). While not technically a cinnamon roll, these bits of croissant dough tossed in butter and cinnamon fit into the broader definition. They’re baked higgly-piggly in a paper tart shell, ideal for pulling apart. Since they’re not iced, you can eat one in the car on the way home without too much mess.

There were no losers in our cinnamon roll sampler, only favorites.  Each of the seven we tried had its own personality. I’ve had my fill for this week, but I’m always on the lookout for the next one. 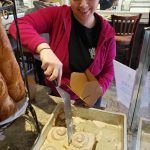 Cutting out a cinnamon roll at SoNo Baking

Next post From The Norwalk Hour: Five Fairfield Food Destinations

Previous Article From The Norwalk Hour: The Changing Restaurant Scene on Wall Street

From The Norwalk Hour: Breakfast — the Most Personal Meal of the Day

From The Norwalk Hour: Crazy for Croissants

From The Norwalk Hour: Hamming it Up – Country Style