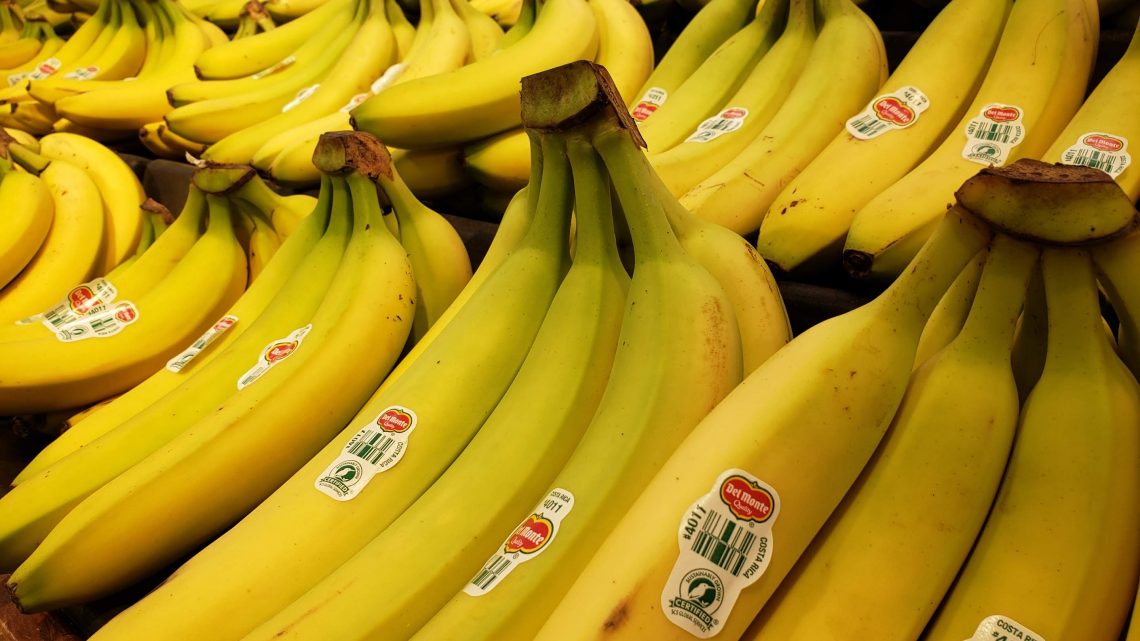 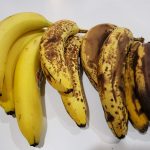 Marsha eyed the rapidly ripening bananas, some aging to a mottled yellow and black, some turning dark as chocolate, and some clear yellow with green tips just the way we like them.  “I’ll make banana cake,” she said.

Banana cake is a mixed blessing for me. It takes a fruit — healthy and delicious even if overripe — and transforms it into a dessert.  Mixed with substantial doses of butter and sugar then topped with a cinnamon streusel, the bananas gain flavor and appeal, but lose their favored status on the food pyramid.

Bananas are ubiquitous in the American diet. They’re popular at breakfast, practical in a lunch box, and handy as a snack at any time.  They’re beloved in bread, muffins, cream pie, and pudding; healthy-ish in smoothies; and relaxing in daiquiris. 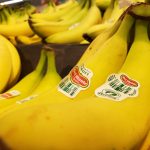 Grown in the tropics around the world, they weren’t always part of our everyday diet. An ancient fruit grown by early civilizations, bananas were introduced to the United States after the civil war.  They became widely available and popular as production ramped up in the 1880s across Central America and the Caribbean.

The term banana republic stems from the ruthless exploitation by large fruit companies who ran whole countries like Honduras and Guatemala as their private plantations.

Marsha’s Banana Crunch Cake, made with ground oats and topped with a cinnamon-y streusel, is a quick, easy, and great-tasting way to dispatch overripe bananas before the fruit flies take over. After grinding the old-fashioned oats with a food processor into a coarse flour, it’s simple to put together.

When I started talking about bananas, a groundswell of affection for banana pudding arose. A staple across the south for southern home cooks, it’s also found on the menu in homestyle meat-plus-three and barbecue restaurants.  Bobby Q’s Cue & Co in Norwalk is a local source for southern-style.

There are many variations to banana pudding, always including vanilla pudding, often enriched with condensed milk, layered with cookies and sliced bananas. The fancier versions are built up almost like a trifle.  Rich and satisfying, it goes down easy.

In the north, the pudding idea has transformed into banana cream pie, most often seen in the display case at diners.  Simpler, but no less delicious, the vanilla pudding and sliced bananas are poured into a pie shell and topped with whipped cream. You can go all out with a scratch crust and homemade pudding or streamline with a bought crust and boxed pudding. I like a graham cracker crust, but a flaky pastry is more often seen. 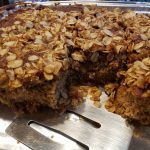 The yellow bananas we see in the store are the Cavandish variety, developed and grown for export year-round.   They’re picked green and ripened in ethylene gas. Ripening is halted by cooling when the bananas are shipped. Once they come to room temperature, ripening resumes.

India and China are the largest growers of bananas, grown to satisfy their domestic markets.  Most of the bananas seen in America come from Central America.

Plantains are bananas that are larger, firmer, and more starchy than the Cavendish variety. They’re popular in the warm climate cuisines of Africa, Central America, the Caribbean, and parts of South America.

Bananas are popular in muffins and quick breads and are frequently paired with nuts. Everyone has their favorite. A google search for banana muffins turned up over 44 million results, broadly classified as best, healthy, or easy.

Plebeian bananas worked their way onto white-tablecloth restaurants as Bananas Foster. First appearing at the swell Brennan’s Restaurant in New Orleans, banana slices are cooked tableside over an open flame with butter, brown sugar, cinnamon, and then ignited into a showy fire with liquor.

They’re delicious breaded and deep fried just like fritters.  Crunchy on the outside and soft within, they are a tasty balance of sweet and salty.

Banana daiquiris bring the everyday fruit into the cocktail hour. Rather than baking something with those softening bananas, toss them in a blender with rum, lime juice, triple sec, and some simple syrup.  Whirl them all together for a refreshing tropical drink.

Without the booze, bananas are the foundation of smoothies.  Add yogurt, fruit, maybe some honey along with other fruits or flavors to make a healthy way to start the day.

Versatile bananas are adaptable to almost any ingredient or mealtime.  They’re found in every corner of American eating. Just be careful not to slip on the peel!

Next post From The Norwalk Hour: Basso Cafe Moves to the Future