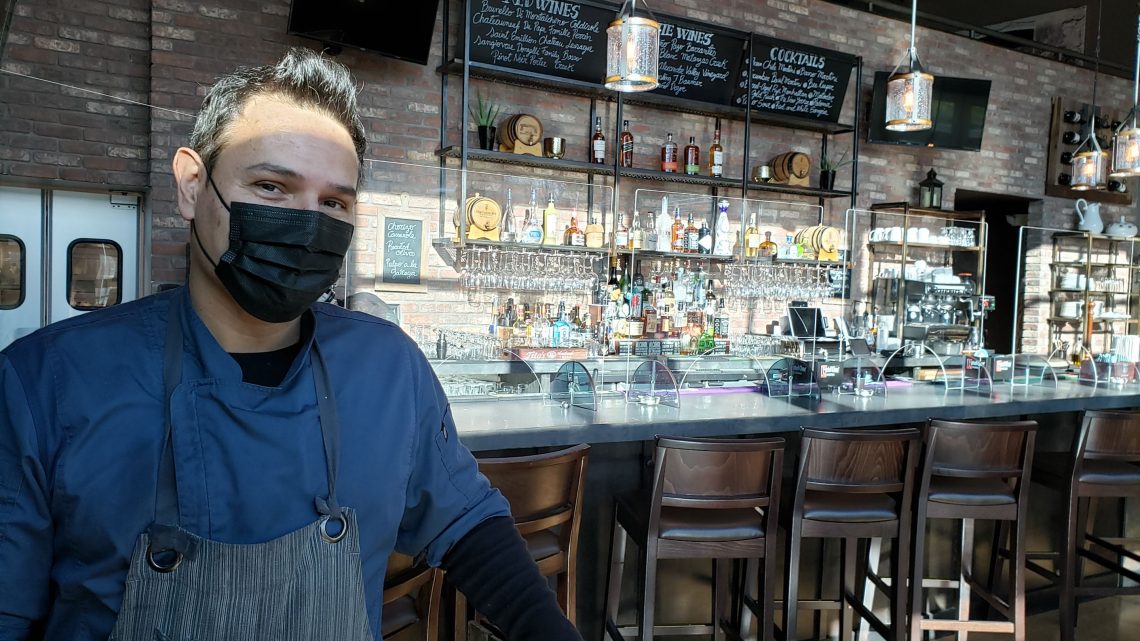 Chef Renato Donzelli has had his eye out for a new location for the last few years.  He’d been successful at the popular Basso Cafe in Norwalk over the past ten years, serving up flavorful tapas and imaginative fusion cuisine to a loyal following. But he couldn’t see any more room for growth at his  New Canaan Avenue location.

You have to be pretty brave (or foolish) to open a restaurant at any time.  The percentage of new restaurants that close within the first year is frightening. But these days, with restricted seating capacities and limited opening times, it’s even more of a risk. 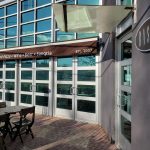 Still, restaurateurs and entrepreneurs can’t resist the allure of the food business.  After all, when everyone likes to eat, to go out for a good time, and to socialize with friends, opening a restaurant seems like a no-brainer.  What could go wrong?

Basso’s former spot, awkward but cozy with its tight seating and tiny bar, was off the fine-dining beaten path — a reconfigured house in an enclave of neighborhood family eateries. His salvation was flavorful cooking and attentive service strong enough to draw a crowd despite the location. 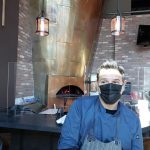 He found what he was looking for by chance. Walking by the empty restaurant storefront at 33 Jessup Road in Westport, just a block off the Post Road, he was taken by the high windows, two-story interior, and a sunny brick patio begging for some al fresco seating.

Once inside, he discovered a spectacular two-story copper-clad wood-fired pizza oven that had been covered over by the previous Japanese-menu occupant and a balcony over the bar for additional seating with views out the two-story windows.  It was his dream location — the next step for the Basso Restaurant and Wine Bar.

Donzelli has kept the menu that earned him success in Norwalk, but added and expanded to suit his new setup.   From Venezuela and growing up in an Italian family, his cooking is based on the best of world 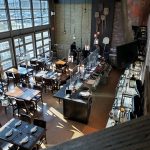 cultures for a blend of Italian, Spanish, and Hispanc flavors.

Two dozen tapas touch on four cultures with offerings including ham and fontina croquettes ($9), avocado and chicken arepas (11), gnocchi (12), and sautéed brussels sprouts (10).  It’s not easy to narrow the tempting list down to a reasonable number of choices.

Wood-fired pizzas are new. I want to go back and try the personal-sized funghi trifolati piemontese (mushroom, onions, goat cheese and truffle oil) (22).  Pizzas, with a four-ingredient crust made in-house, are “flash-cooked in our inferno!” 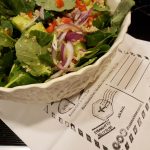 Two new salads are another addition enabled by the larger kitchen and expanded seating in Westport. Balela salad (16) is a flavorful toss of chickpeas, Mediterranean roasted olives, grape and sun-dried tomatoes, scallions and fresh herbs with a sherry vinaigrette.  Quinoa and kale salad (15) includes cucumber, red pepper, and some just-right salty feta cheese.  Either can be dressed up with shrimp, steak, chicken, or fish to make a hearty main course.

The menu runs all day for both lunch and dinner, following the current trend. But with tapas and salads there’s plenty of lighter fare for a midday meal at the sun-warmed outside tables or inside where the light streams through the two-story windows.  In the evening, gas heaters warm the patio seating while the two-story copper chimney of the pizza oven adds a cozy glow inside. 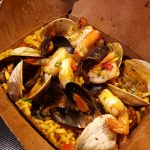 Our takeout dinner started with arepas and the quinoa-kale salad. Paella for two (52), an old favorite from the Norwalk location, was beautifully presented.  Chicken, calamari, chorizo, clams, mussels, and shrimp, slow simmered over saffron arborio rice was rich and satisfying on a cold winter weeknight.

Basso is a wine bar too, so there’s a well-chosen list of wines by the glass and bottle from around the world, picked to suit Donzelli’s culinary style.  Wines you’ll be eager to try (starting at $11 a glass) are all personally selected by the chef.  There’s a popular exclusive-bottling of Basso Sangiovese Toscano (16/48) from Donzelli’s friends at de la Localitá Altesi in Montalcino.

The sleek interior of the Basso Cafe is done up in brick, copper, and dark woods, sun-filled during the day and inviting at night.   Seating is socially distanced now but ready for the day when all the tables can be filled.

The private Chef’s Room, with a handsome wood-slab table is ready for groups of four to eight. Reserve it for an over-the-top custom tasting menu or just a casual gathering.

Donzelli is thinking positively and looking forward to the vaccine bringing restaurant dining back to normal. He’s hoping that before too long “People will feel more confident.”  Aren’t we all? 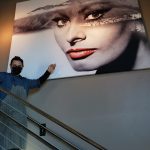 Overlooking the two-story space is a striking portrait of a crimson-lipped Sophia Loren done by Donzelli’s father, a photographer and artist in Venezuela. A close look reveals that her iconic broad-brimmed hat and veil are actually the coast and mountains of Venezuela.  It’s a striking summary of the Chef’s culinary world and the sophistication of the new Basso Restaurant and Wine Bar.

Next post From The Norwalk Hour: The Enticing Flavors of Knipschildt Chocolates

Previous Article From The Norwalk Hour: Yes, We All Love Bananas