From The Norwalk Hour: Seeking Spring at Local Restaurants 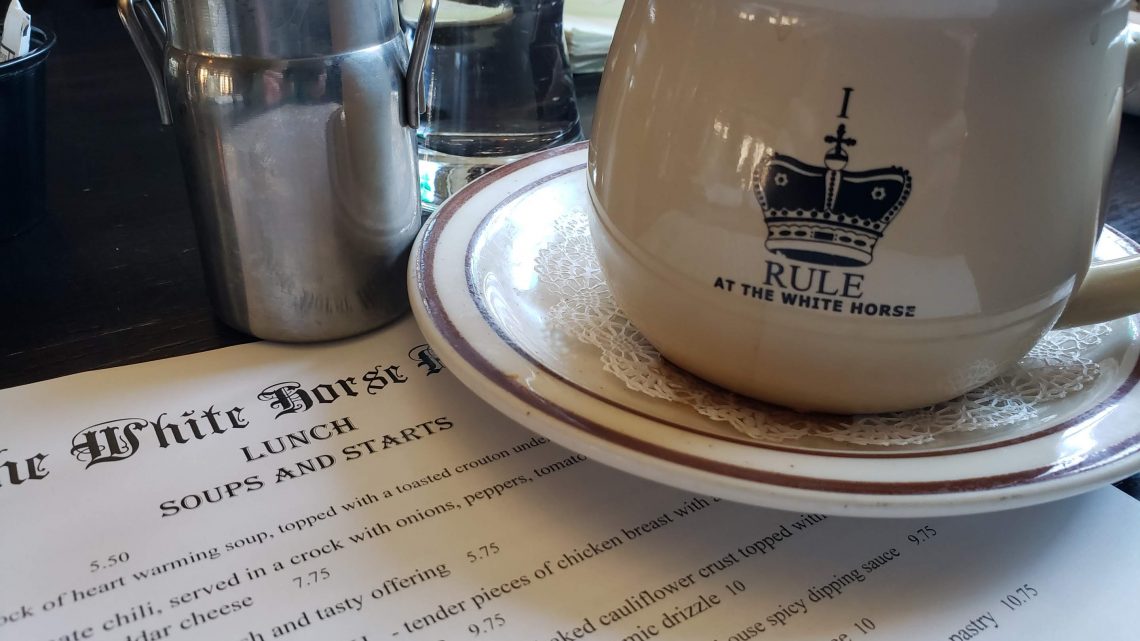 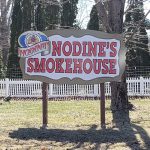 We needed a ham for Easter dinner and there’s none better than from Nodine’s Smokehouse upstate in Goshen, Connecticut.  Delivery was an easy option; they’re happy to ship. But Goshen is a delightful drive and just over an hour away.

The idea of a road trip to pick up a ham grew into an early spring ride that included a nice lunch and some lovely scenery — a worthy excuse to get out of the house.

Connecticut’s northwest abounds with well-known restaurants, but on the Tuesday we were going many were closed. Fortunately the White Horse Country Pub and Restaurant is open every day.  An attractive destination about an hour away, it’s in the village of Marbledale, part of the town of Washington, and is as covid compliant as can be. 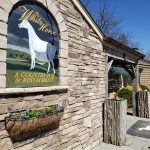 Squeezed between the road and a rushing stream, the rambling White Horse has a distinctive British country pub vibe and a collection of fascinating British and local artifacts. On a cloudless California-like we were offered seating on the deck within sight of the low waterfall upstream but chose to be near the warming fireplace decorated with spring flowers.

The much-awarded White Horse (four Connecticut Magazine statewide bests in 2021) has a lengthy, reasonably-priced menu heavy on British specialties and American favorites. The four-page large-format compendium of temptation may seem overwhelming at first, but it only encourages a return visit to try other dishes. Bring your choosing hat; it’s not easy to decide. 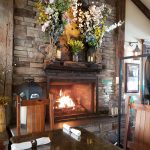 Marsha’s British Raj chicken salad ($15) was tossed with dried fruit, almonds, toasted coconut and a curry-chutney mayo and presented on a bed of fresh greens.   The California weather pointed me to the shrimp louie salad (13) with bite-size shrimp, avocado, hard-cooked egg, and romaine, all tossed with a zippy louie dressing — just as good as on the Monterey pier.  Going in, we knew a sticky toffee pudding (7) was a likely finish to lunch.  The generous square of moist date-cake was topped with the traditional sauce and garnished with a very clever silhouette of the restaurant’s horse logo in ground cinnamon. 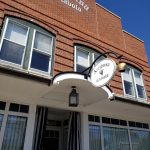 A turn north on Rt 202 started our half-hour drive past farms and through the still-dormant woods to Litchfield and then on to Nodine’s in Goshen.  The borough of Bantam, just before Litchfield, brought us to a halt. It’s the home of Connecticut magazine’s “Best Restaurant”, Arethusa al Tavolo (sadly not open on Tuesday) and its neighboring Arethusa Farm Dairy.  The dairy was open with lots of tempting ice cream flavors including butter pecan, pumpkin, and the New England favorite — maple walnut

Next door is the Mockingbird Kitchen and Bar, an eclectic restaurant with its own farm.  Just down the street is the Bantam Bread Company, the source of some pretty spiffy-looking all-natural breads and pastries available Thursday through Sunday.

Just a bit up the road before you get to Litchfield, the Litchfield Distillery is on the right.  Book a tasting in advance to get the lowdown on their well-regarded booze.

We didn’t have time to walk around the green in Litchfield, but it’s a pleasure if you can.  White-steepled churches, charming storefronts, and historical markers abound. 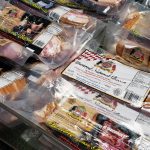 Litchfield is a good restaurant town too.  The renowned West Street Grill and the more casual Village Restaurant face the green.  They look across to the popular Market Place Tavern, housed in the former town jail.

Turning north on Rt. 63 we passed beautiful old homes that tell of Litchfield’s earlier prosperity. Coming into Goshen the fairgrounds, home of the Labor Day Weekend Goshen Fair for more than 100 years, occupy both sides of the road.

Further along, the Nodine’s Smokehouse store is hidden behind a converted farmhouse.  The rustic store is packed with a dazzling array of smoked meats and sausages. If bacon is your thing, this is a pilgrimage site. 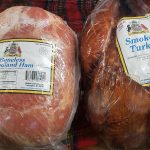 Two generations of the Nodine family source top-quality meats  to smoke in small batches using traditional methods.  Their products are prized by chefs and home cooks alike.  The natural, meaty texture of the hams and their authentic smoky flavor are worth seeking out.

While spring was just breaking at home it wasn’t quite there up north. Still, the area has a year-round natural beauty that made it great to get out of the house; Easter dinner was just an excuse.

Next post From The Norwalk Hour: News from The Farm

Previous Article From The Norwalk Hour: Fresh-Baked Bread, Just Like in France

From The Norwalk Hour: Seeking Spring at Local Restaurants

From The Norwalk Hour: We Eat Well at Home, but Long to be in a Restaurant