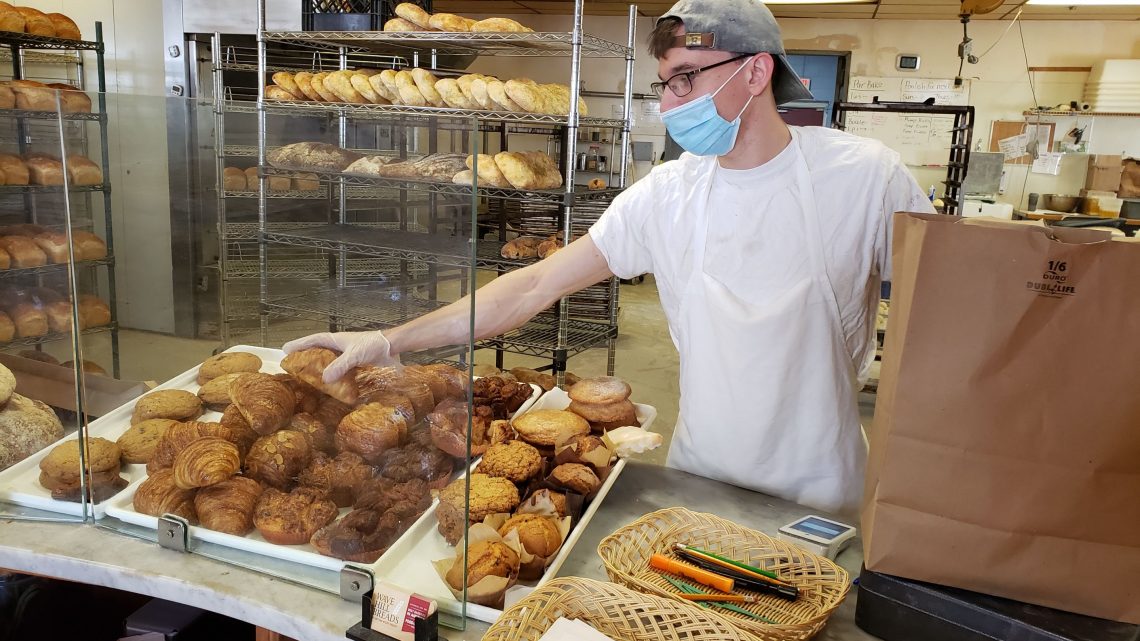 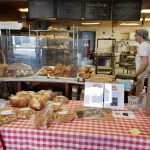 I like to go to the bakery for a fresh-baked loaf of bread.

In a Walter Mitty mood, I might imagine a morning stroll down a cobbled lane in France, baguette under my arm anticipating a café au lait. But in reality, High Street in Norwalk — home of the Wave Hill Breads — is a far cry. The one-way paved thoroughfare features parked cars in front of two-story houses, restored historic homes, and low-rise apartment blocks. A perfectly fine street, but not France.

The red Wave Hill awning, partially concealed by trees, is the only retail entrance in sight. Parking is in the driveway alongside the concrete block building, a short walk around to the front. 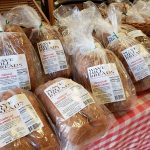 But inside is where things get good. The retail area is just a counter and a few tables.  Behind it, the freshly baked, crusty, unwrapped loaves in all shapes and sizes are stacked on tall bakers racks. On the left, a table is covered with sliced pan loaves in plastic bags with seductively appealing names: Natural Marble Rye, 14 Whole-Grain, Natural Buttermilk White, Three Grain French Country, Honey Whole Wheat, and Cinnamon-Raisin Buttermilk White.

Make your choice from the overhead blackboard: multi grain, pumpernickel, wild yeast sourdough or Roman focaccia. Three grain, the Wave Hill flagship bread, is available in a range of sizes and shapes: baguette, demi baguette, batard, and epi. Your loaf is plucked from the shelf and slipped into a brown paper bag, almost like France. 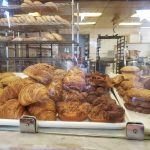 Displayed down front are the croissants — plain, almond, or chocolate — and cinnamon-laced monkey bread made from bits of dough left from croissant making. There are also scones (orange is my favorite) and sometimes cookies or muffins.

Behind the parade of bread is the bakery. There’s no wall or partition, just a scrim of mobile cooling racks, separating a voyeur like me from taking in the scene. Large deck ovens are to the left, mixers and work benches to the right.  There’s always something going on, but the intense bread baking is done in the wee hours, before I get there. Still, the essential bakery aroma lingers on, regardless of the time of day.

A baker with a flour-dusted apron stops working and comes to the counter to serve. 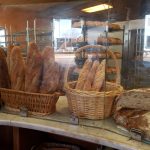 I’m there about once a week for a Three Grain Batard. The hefty loaf has a honey-dark crust and flavorful crumb with the large and small holes found in old-world style hand-made bread. Its yeasty aroma is a prelude to the crisp crust, chewy texture, and remarkable flavor that lies within.

At home, I slice it right away and freeze most to last the rest of the week.  I like a toasted slice in the morning, and we can knock off two or three with dinner.  A few don’t make it to the freezer. One at least goes to replacing the calories used in slicing and a couple more may accompany lunch that day. It’s always best the day it’s baked.

The three grain dough is also formed into demi-baguette and epi. An epi is a baguette with diagonal cuts alternating sides to make a loaf that looks like a large head of wheat and pulls apart easily.

Italians are known for their bread too; that’s where owner Tim Topi became a master baker. But as far as I know, they don’t have the same folklore about the village bakery and the fresh daily loaf as do the French. 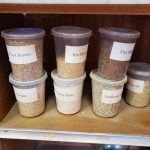 Topi insists on the best and freshest ingredients for his bread. King Arthur “Sir Galahad” flour is the foundation.  Organic rye, organic spelt, pearled barley, and organic winter wheat berries are milled daily in the bakery for maximum flavor, freshness, and nutrition.  He’s a stickler for these details.

There are other excellent bakeries nearby. SoNo Baking Company has some delicious loaves. Flour Water Salt Bread in Darien has a strong following, and I hear good things about a new place in Westport — Kneads.

It’s the unvarnished authenticity and bread-passion that sets Wave Hill apart for me. I like to see the baking in progress, chat with the bakers, and even run into owner Tim Topi once in a while. I always get the sense of an old-world experience and can imagine (for a moment) that I’m in France.

Next post From The Norwalk Hour: Think Outside the House