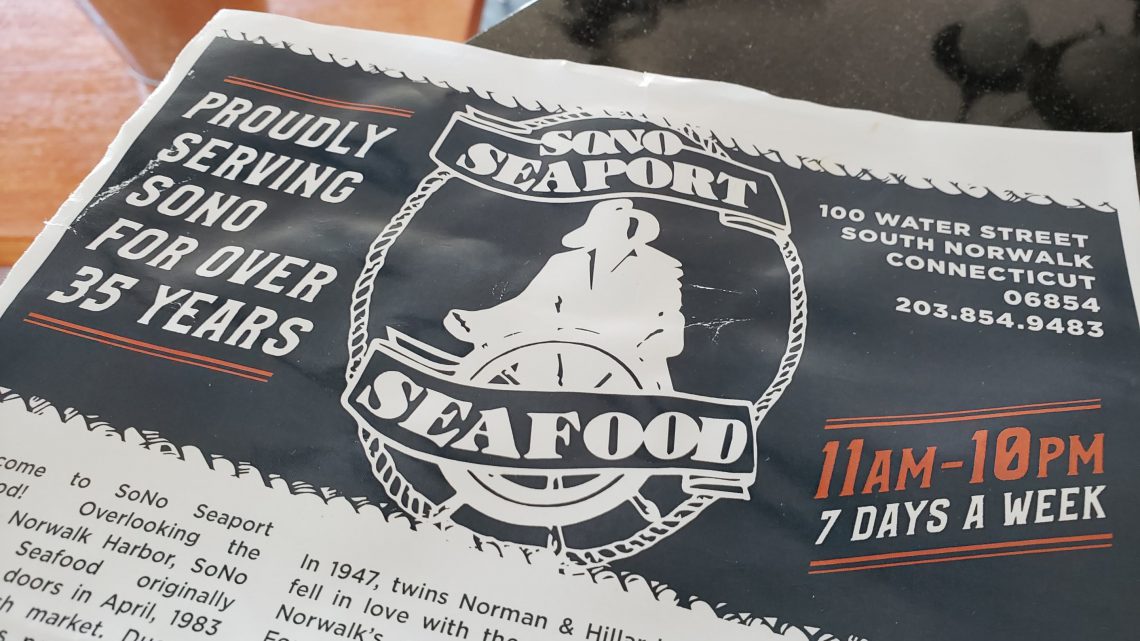 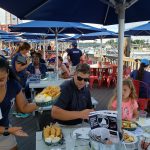 When our kids were in school we would celebrate both the end and the beginning of the academic year with a dinner at SoNo Seaport Seafood. Lobster and local oysters were on the table. The whole family looked forward to this annual ritual and relished the regional bounty — even the youngsters.

They’ve long since moved on from Norwalk schools, but Marsha and I still like to celebrate the beginning and end of summer at SoNo.  We try to get down in June when the deck opens and again in early September. We’ve gotten to see both the Norwalk River moorings fill and the Oyster Festival tents come down from our seats on the SoNo deck.

SoNo Seaport has always been our place to take visitors who haven’t eaten fresh seafood by the water on the New England coast. But places like this are endangered.  In this era of skyrocketing waterfront real estate prices, restaurants like this are losing out to development.

We were shocked this year to learn that this local institution was closed. “For renovations” the message said, but you never know what that means. We were concerned that they were facing some serious structural problems and taking a financial hit by missing a big chunk of the all-important summer season. 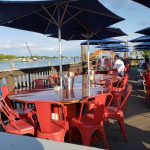 Hooray!  SoNo Seaport is finally open and better than ever.

They really were closed for renovations. The owners have completely redone the inside dining room, bar, and restrooms in clean, stylish, waterfront gray.  The layout is essentially the same, but it seems much brighter and more spacious.

The famous deck along the docks looks the same, but is dressed up with spiffy new umbrellas and some bright red chairs.  Windproof tin buckets filled with napkins, cups, and flatware are conveniently placed on each table. 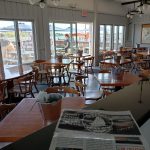 But the big changes are on the menu.  Local chef Matt Storch, famous for his award winning SoNo restaurant Match, Black Rock location Nom-Eez, and Match Burger Lobster in Westport has been brought in to revamp the menu and revitalize the kitchen. Don’t worry, it’s still the clam shack cooking that you expect — steamed lobsters and clams along with lots of fresh, local fried seafood — but they’ve upped their game and expanded the menu.

On a recent Friday night Storch could be seen through the kitchen pickup window working with the cooks on the line and in the dining room talking to the staff and greeting familiar faces.  His stained apron told us he was hard at work in the kitchen, not just a figurehead consultant lending his name. I’m told he’s there for a few more weeks to get the new menu up and running. 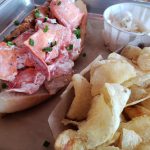 Bloom Family local oysters ($12 for 6), head up the raw bar choices. Shellfish can be ordered steamed, char-broiled, or “Dipped, Dusted, and Fried.”  Other starters on the expanded menu include ceviche, tuna tartar, stuffed clams, crab cake, and sticky wings.

There’s lobster, of course (pound and a quarter size) served do-it-yourself ($22) or cracked and ready ($30). Lobster rolls come dressed lightly with citrus mayonnaise ($21 for 4 oz) or Connecticut style — hot with butter. Yes, I’m from CT, but I still favor the upper New England cold salad recipe. Mine was packed with claw and tail meat on a toasted bun and came with a tub of tangy slaw and a boat of crisp chips. 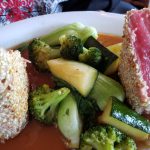 There are a few sandwiches including fried oysters, fried fish, chicken, steak, and, of course, a hamburger. A selection of tempting salads can be gussied up with shrimp, salmon, chicken, lobster, and more.

Under the heading of “Bigger” you’ll find old friends like fish and chips, scampi, and fish of the day.  But there are some new kids on the block too. Marsha went for the sesame-crusted tuna with ponzu sauce (32) — perfectly fresh, deliciously cooked, and beautifully presented.   The menu rings with the Asian influences that helped Storch be a Food Network “Chopped” champion. Scampi and lobster pot pie are a couple more offerings that I’ll add to my future “to eat” list. 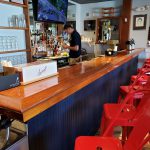 There’s a new drinks list too. A baker’s dozen of craft beers are listed next to twenty carefully chosen wines (long on seafood friendly whites) by the glass or bottle. Glassware, although still plastic, has been upgraded. Summery cocktail suggestions are abundant.

There seemed to be an army of servers in their snappy navy “Crew” shirts and khaki shorts buzzing around.  Service was quick and efficient.

We breathed a sigh of relief when we heard SoNo had reopened. The changes are exciting and enhance an already well-established local restaurant standout.  SoNo Seaport seems to be set up for another thirty years of good eating. We’re already planning for our end of summer feast. 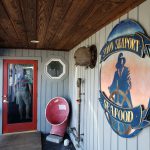 Next post From The Norwalk Hour: For the Love of Lobster