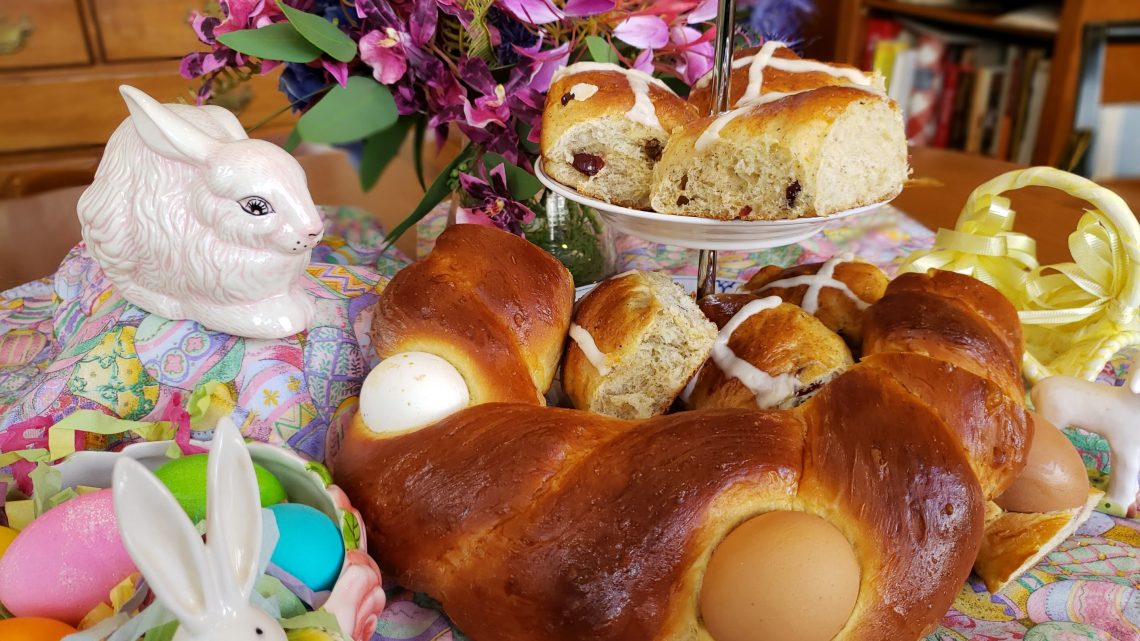 The toilet paper and cleaning supply aisles emptied out early on in the pandemic.  The next section to be pillaged, by my observation, was the baking department. Flour and sugar of all types and brands disappeared in a matter of days.   Chocolate thinned out and even the cake mixes were decimated. I think I know why. 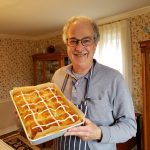 It seems that baking is a popular activity while hunkering down, an elemental exercise that feeds and satisfies while occupying our time. It reassures us that we can fend for ourselves with scratch cooking and brightens the day some homemade treats.  A baking success can yield the kind of positive feedback that our fragile egos and stressed families need right now.

Cardamom, cinnamon, and cloves; raisins and sultanas soaked in rum; the zest of one orange.  These are words that give me a culinary thrill.  Yes, you’re right, it doesn’t take much.  For now, moments that can satisfy and excite like this are to be cherished. It’s a kitchen dusted with flour and aromatic with yeast for me.

The Easter season is chock-a-block with traditional baking opportunities. Springtime is filled with a mix of pagan and Christian symbols made up of flour, butter and sugar. Bunnies and eggs, English hot cross buns and Italian Colomba di Pasqua (traditionally in the shape of a dove) are all ways to celebrate the fertility of Spring and the Resurrection.

It looks like the bakery section is recovering just in time for Easter. Empty shelves are beginning to fill up again. The bottleneck now seems to be yeast. Ordinarily occupying a small high-up shelf with just a few offerings, leavening products are now scarce and in high demand. 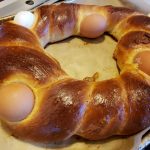 Easter bread just out of the oven.

Our friend Phyllis Ferraro used to bring us Italian braided breads at Easter time.  Yellow with butter and egg, they had a nut brown crust, a lightly sweetened crumb, and a whole egg baked into their woven center.

With a hankering to make something like that, we called her for advice. “It was my grandmother’s recipe,” she shared, “that she brought from Italy.”  Unfortunately, Phyllis didn’t have a written copy any more. I suspect she used to make it from memory. “Brush it with egg before baking,” she advised, “for a nice shine.”  She went on to say, “We never used colored eggs like you sometimes see now.” 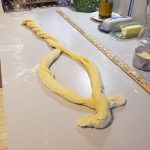 Armed with her advice I went in search of a recipe. Braided Easter Egg Bread on Allrecipies.com looked promising. On Phyllis’ advice I skipped the colored eggs and rainbow sprinkles for a more old-school appearance.  The straightforward recipe included a video that was helpful when it came time to braid and shape the traditional ring.

Measure, mix, knead, then rest to rise, the Easter bread had the absorbing baking rituals that I find so rewarding. With the help of the video, I hand-rolled out two long strands, braided them (too tightly it turns out) and then formed a ring. Raw eggs, some brown — some white, were tucked into the braid which had to be proofed again. After brushing with a beaten egg, it baked for about half an hour. 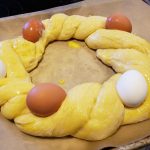 Ready for the oven

The final product was golden and glowing.  Some of the eggs had been pushed out of the braid but remained attached. The burnished bread had an even texture, golden color, and a rich buttery flavor. The eggs were well-baked, slightly more done than if they had been boiled. A success!  I think Phyllis would have approved.

I’m a sucker for glossy food magazines. The April/May issue of Fine Cooking included a six page layout on Easter breads that was loaded with mouthwatering pictures. There was a master sweet-dough recipe that, with “dough mix-ins” added, was the foundation for four traditional breads. Romanian Easter bread was enhanced with chocolate and nuts. Croatian Easter bread included citrus and raisins.  Greek Easter bread was a variation on my Italian ring flavored with orange and lemon zest and festooned with eggs nestled in the braid. 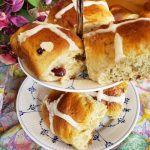 All were tempting options, but the hot cross buns called out to me. A favorite across the United Kingdom and Commonwealth, they’ve never been my cup of tea. Marsha was surprised when I told her my plan, but the recipe and accompanying picture was irresistible.

The dough recipe was a bit fussy — scald the milk, start the yeast with an extra proof, and gradually add the flour — but I had the time. The add-ins for this recipe included raisins (I used sultanas and substituted craisins to add a New England touch) orange zest, and ground cardamom, cinnamon and cloves. 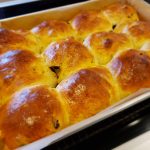 Mix, knead, proof, shape then proof some more, brush with egg wash and finally into the oven. The citrusy, spicy aroma from the oven was advance billing for the fragrant, exotic rolls to come.  Stripes of icing in the traditional cross pattern finished the buns. They were delicious! A world apart from any commercial hot cross bun I’d ever had.

A google search for “Easter bread” turns up sites offering from six to sixty-three holiday baking ideas. It’s a great time for us to explore other cultures and delight family and friends with our scratch baking.

Next post From The Norwalk Hour: Corralling Some Yeast for Sourdough Bread

Previous Article From The Norwalk Hour: Send a Social Distance Hug with the Gift of Food