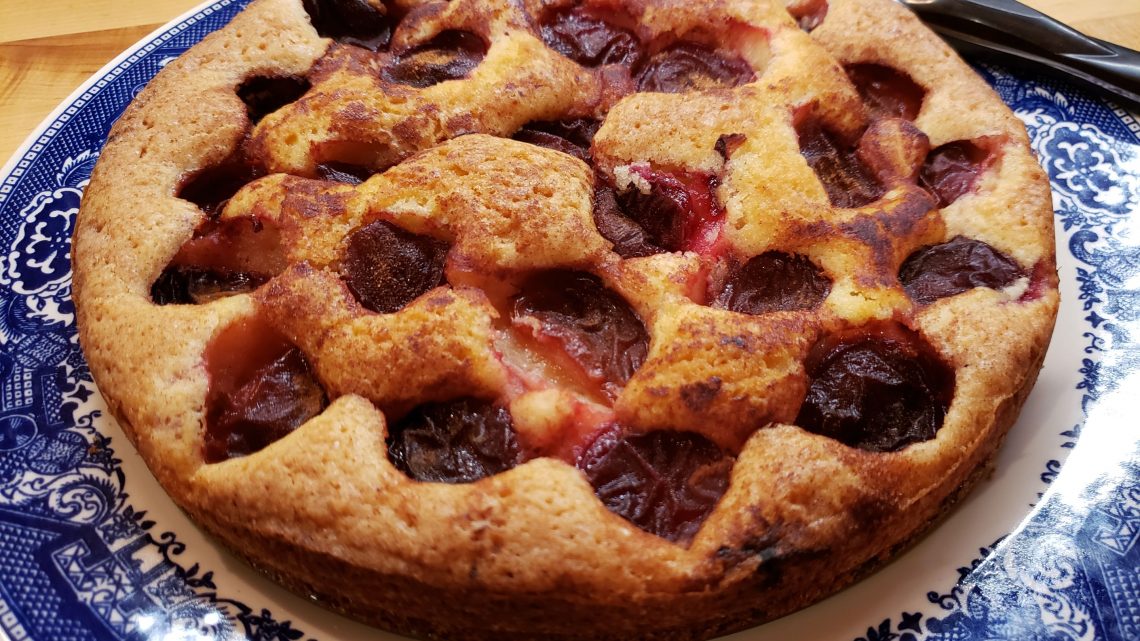 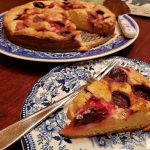 In August of 1983 Marian Burros published her recipe for a plum torte in the De Gustibus column of the New York Times.  It was just one more of the weekly installments that she had been for years.

This particular column, unlike most others, took on  a life of its own. The plum torte recipe, and the first-hand account of her affection for it, became one of the most popular and requested recipes ever to appear in the Times.

Burros is an award-winning food writer, cookbook author, and columnist.  Her lifetime of food writing began in 1969 with a recipe column in the Bridgeport Telegram.  The plum torte, in spite of her impressive career and body of work, is most likely her best known dish. 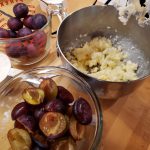 With just a handful of everyday ingredients and some seasonally ripe fruit, magic happens. The simple recipe is easy, delicious, and impressive, while it’s bullet-proof elegance is readily adaptable.

Cream the butter and sugar, mix in the eggs, flour, baking powder, and salt then pour it in the pan.  Top with plum halves and pop it in the oven for about an hour. That’s it!

It’s very much like Ellen’s Rotten Fruit Cake, a recipe that Marsha’s friend Carol gave us a few years back. Despite the unappealing name, it’s a flavorful and easy way to move along excess fruit that can accumulate during the harvest season. Ellen’s cake hasn’t caught on like Marian’s. I guess names do matter.

Burros is said to still make the torte at home in her retirement.  Before the early fall plums come into season, she bakes it with blueberries or peaches in their turn.

The torte recipe was published every fall until 1989 and has reappeared from time to time since then.  It’s an impressive 37 year track record with no end in sight. In recent years updated versions have suggested a little less sugar to lighten the caloric load (no adjustment to the butter) but make it clear that it’s the bakers option.  It’s a good idea to taste the fruit and adjust the sugar accordingly.

In 2016 Times food writer Margaux Laskey suggested five ways to adapt the recipe while paying homage to the near-perfection of the original: add some spice; change the flour; use another fruit; or try a different pan.  She also suggested multiplying the recipe to make more than one — a good idea, but not original.

In her 1983 column Burros was so enchanted with the recipe that she made dozens for the freezer, trading tortes for storage space with her friends.  She wrote, “I became so enamored of this delicious, homey recipe that when the plums were at their cheapest between late August and October I would make half a dozen tortes and freeze them.  They were especially appealing on a raw February day, briefly warmed in the oven to emphasize the fragrance of the cinnamon and bring out the flavor of the butter and eggs and plums.” 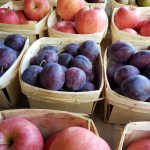 The one-quart wooden berry baskets of local plums lined up at a Hudson Valley farm stand marked the season to bake the famous torte.  The recipe had reappeared on the Times web page just the week before.

It took only 20 minutes to measure the ingredients and pull the batter together and dust the top with cinnamon and sugar.  The tempting fragrance from the oven filled the house.

As the torte bakes the plums give up their juice, letting the flavor soak through the cake. The sprinkle of sugar on top adds a little crunch but nothing so heavy as a streusel.  An even distribution of half-dollar-sized plum halves means that almost every bite includes some fruit. 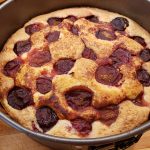 When taken from the oven, the plums dot the surface of the cake. While cooling (as it must) they sink down into sweet-tart puddles of concentrated flavor that pockmark the top.  I can imagine those divots holding a spoonful of whipped cream in place.

The family that gathered for dinner that night received their wedges of plum torte with acclaim.  Some opted for a scoop of vanilla ice cream, others wanted theirs straight up.

I can’t take credit for the success.  Compliments go to the farmer for the perfect fruit and Marian Burros for a fool-proof, time-tested, recipe.  I just did the mixing. 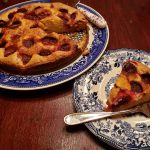 Next post From The Norwalk Hour: An End-of-Summer Dinner On The Harbor

Previous Article From The Norwalk Hour: A Message in a (Wine) Bottle