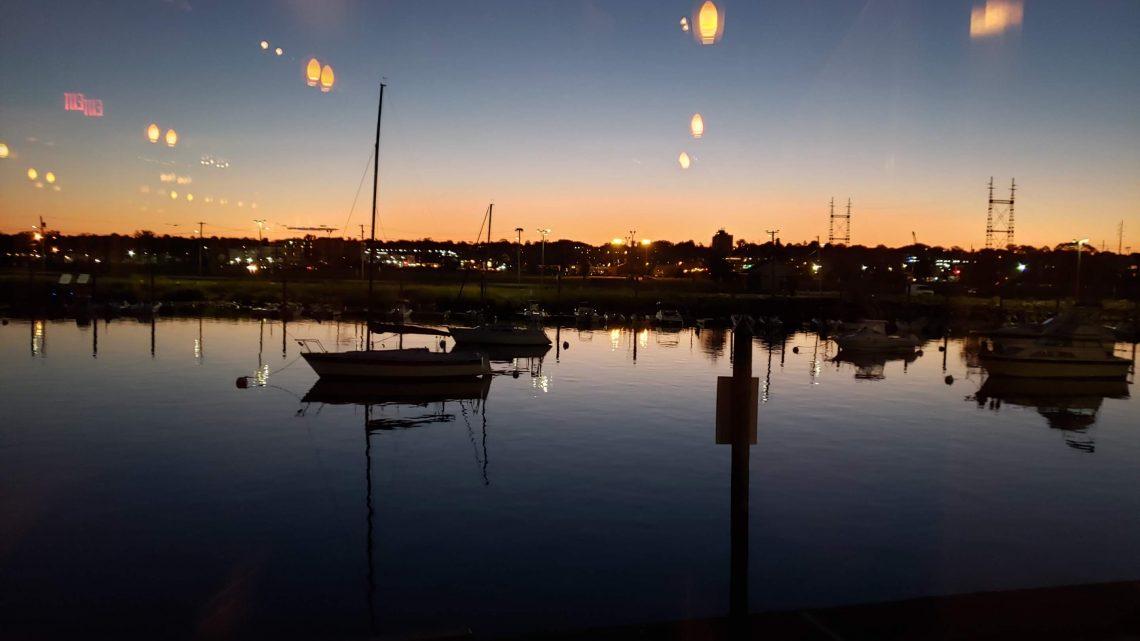 Sunset from Harbor Lights in Norwalk 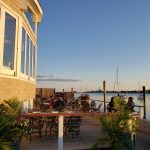 It’s been a rough ride for restaurant dining this summer. We’ve been out a few times, but not as often as in summers past.  The pandemic has knocked our dining habits out of kilter.

Instead of many, we’ve only had one meal by the water — an early-season dinner on the socially-distanced deck at Sono Seaport Restaurant.  We’ve eaten out a few other times both indoors and out but not with our usual summer-season gusto.  Without the pleasure, excitement, and ritual of restaurants, summer hasn’t been the same.

As we head into October, passing the equinox into Fall, one more dinner by the water suddenly became a priority.  Virus concerns be damned, we had to have another sunset dinner by Norwalk harbor before the sun set on summer.

Restaurants too are looking at the change of seasons with some apprehension.  I see a few propane heaters in outdoor dining areas, but soon it will be too cold and too dark for pleasurable sidewalk suppers. That’s a fact of New England life.

With no change in sight from the 50% indoor seating and the end of PPP funds, operators are straining to see the path forward.  I know some people who have eaten outside this summer, but are very reluctant to book a table indoors.  I know others who haven’t eaten in a restaurant at all. What can be done to persuade them?

In addition, restaurant phones should be ringing off the hook at this time of year with holiday season bookings.  In a normal year, the good dates and prime venues would be gone already.  Events are a smorgasbord of business that generate revenue to help restaurants get through the slow winter months.   I’ll bet there’s not much of that going on now. 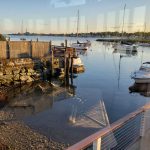 Connecticut’s success in controlling the virus spread can be credited to Governor Lamont’s tough management along with widespread compliance with the rules. We were all jolted by the early attack of Corona in the Metro area and came to understand the mayhem that can happen without prudent behaviour. But it’s been tough on restaurants.

The dining room at Harbor Lights in Norwalk faces west, just right to catch the sun’s evening performance at a late-summer dinner.  The high-ceilinged space with windows on three sides looks out over moored boats, salt marsh grass, and the harbor’s broad channel.  The setting combined with the seafood-centric menu ticked all our boxes. 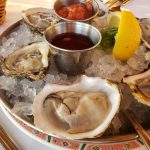 It was too chilly to take an outside table by the water that would have been delightful on a warmer evening.   Instead, we sat inside — the cloth-covered tables spaced with the respectful distance of an exclusive London club.  Each table enjoyed a water view on three sides with the sunset at center stage.

I had to have some fresh, briny oysters ($14) — we were just upstream from the Copps Island oyster docks.  Marsha’s Caesar salad (11) was assertively dressed and appropriately sized as an appetizer.

There’s a Greek thread that runs through the Harbor Lights menu. I started with a glass of Atlantis Asyrtiko from the Aegean island of Santorini — a crisp, dry white perfect for summer seaside dining. 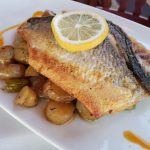 A sautéed fillet of Mediterranean sea bass was the centerpiece of Greek Lavraki ($29). The fish came with a flavorful mix of capers, asparagus, fingerling potatoes, and olives.  Marsha’s Long Island sea bass ($39) was the special of the day.  A whole fish, laid open, boned, and perfectly cooked, it came with a baked potato and garlicky broccoli rabe.

Other menu choices included an angus burger ($16), Connecticut-style lobster roll (27), crab stuffed shrimp (28), fish and chips (26), and a strip steak (37).  Salads and small plates range from the Caesar salad (11) to grilled octopus (21) with crab cakes, stuffed shrimp, and lamb lollipops in between. 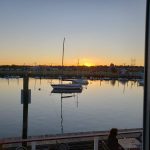 The sun set right on schedule. A small assembly of clouds in the distance evolved from gold to gilt-edged purple.  Geese flew across the harbor.  A returning fisherman puttered to his mooring as a swan carved a wake in front of the restaurant.  Great blue herons coasted inland to their overnight roost. As we were leaving, just before dark, the sky turned a deep wedgewood blue with a pink rim along the dark silhouette of the opposite shore.  The restaurant’s lights reflected in the window as the SoNo lights twinkled in the distance.  It was a lovely wind-up to our summer.

Next post From The Norwalk Hour: Delicious drinks at the Hartford Flavor Company