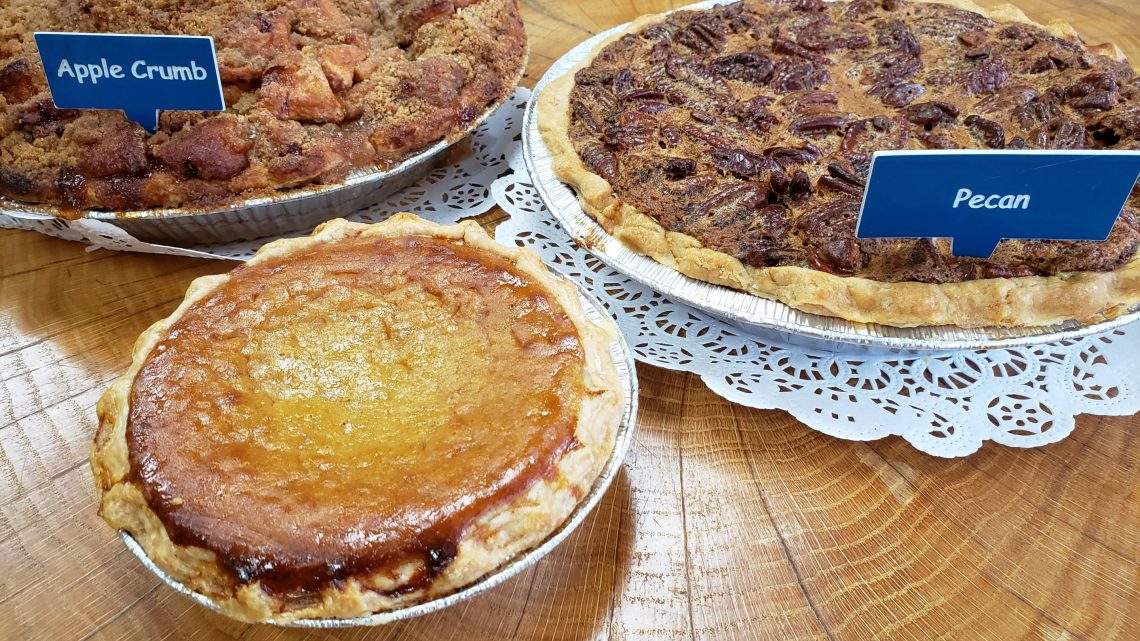 Pumpkin, pecan, and apple pies from Michele's Pies for Thanksgiving

Thanksgiving dinner can leave you groaning. All that turkey and dressing, beans and brussels sprouts, potatoes (sweet and mashed) can overstuff.  But I implore you to save room for dessert.

The pies and cakes that crown the dinner are cause for extra thanks. They shouldn’t be pushed aside by overindulgence just because they come last.  I don’t want to hear, “Sorry, I’m too full.” You need a plan to be ready for dessert.  It’s not Thanksgiving without them.

Pumpkin pie is the standard.  There aren’t many variations to this American favorite.  Make small tarts or a fancy fluted crust. Use a frozen pie shell or make scratch pastry.  The custardy filling is unchanged no matter the presentation. The pumpkin pie spice blend of cinnamon, nutmeg, ginger, cloves, and maybe allspice is so beloved that it has moved beyond the pie to spread across American culture, flavoring and adding scent to everything from coffee to candles.

Pecan is another favorite Thanksgiving pie where simple is best. It can be gussied up with bourbon, chocolate, or maple but the basic recipe is still the gold standard. The secret: it’s shockingly easy to make.

Both pumpkin and pecan pies should be served at room temperature.  They can be made Thanksgiving morning or even the day before — getting something off the long to-do list.

Mincemeat is an old-time pie that is a little out of fashion now, but still popular with a few members of our extended family.  The double-crust pie is a little more complicated to make, but the filling comes from a jar, unless you’re a hard-core scratch cook. The popular Nonesuch brand has been beloved by bakers for years. It’s partner on the plate is a sugary, buttery, booze-laced hard sauce — a possible reason for the pie’s popularity.

It’s not clear to me why apple pie is not a Thanksgiving dinner regular. Apples, after all, were a harvest-season kitchen standard in colonial times.  Double crust, crumb topped, or even in a rustic galette with folded over edges, it seems to me that it fits right in with the other flavors of the day.  A handful of cranberries tossed with the apples makes it even more Thanksgiving-y. 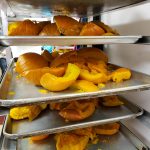 Fresh pumpkin for pumpkin pie at Michele’s Pies in Norwalk

Michelle’s Pies on Main Avenue in Norwalk is a great source for award-winning pies. As a child, Michelle learned her old-school pie-making skills from her grandmother.  The pumpkin filling, for instance, is made from fresh pumpkins — not canned.   You have to plan ahead though and pre-order.  Pies sell out a week or more before Thanksgiving.

In addition to delicious pies, you can get sophisticated fruit tarts and cakes at SoNo Baking in South Norwalk.  While not traditional for Thanksgiving, they’re good looking and taste great — a delight to anyone around the table. SoNo is also a source for platters of cookies, bread, dinner rolls, and breakfast pastries for the early morning Thanksgiving crowd.

Beyond the old favorites, Thanksgiving dessert can be a place to branch out.  I’m a traditionalist for the main course but not against innovation at the end of the meal.

Pumpkin cheesecake or a pumpkin trifle blend a traditional flavor in a new presentation.  Hold back some parsnips from the main course to make Dorie Greenspan’s parsnip cake. It’s a little fussy to put together but the cake and filling can be made ahead. A cranberry-apple crisp wouldn’t go amiss and can be made in the morning before the turkey takes up the oven. 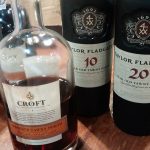 With dessert, enjoy a glass of tawny port or malmsey madeira for a nod to our colonial forefathers.  Made today as they were back then, these slightly-sweet, full-bodied, fortified wines match up well with the pies.

Tawny port is aged in a barrel, rather than in the bottle like a vintage port. The dried fruit, caramel, and nutty flavors make it a great match for dessert. The wine is labeled 10, 20, 30, or even 40 years for the number of years it spent in the barrel.  Ten year is fine. Twenty is considered the sweet spot between price and quality. Brands including Graham, Taylor-Fladgate, and Croft won’t disappoint. 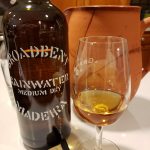 Madeira, from the island of the same name, is a fortified wine with a unique flavor. Made in a range from sweet to dry and across a broad range of price, it was popular in colonial times.  Rainwater or Reserve are light and fruity. Rich and sweet, Malmsey pairs well with dessert. Look for Broadbent, The Rare Wine Company, or Blandy’s.

I’ll try not to be so ravenous from the hours-long aroma of the roasting turkey that I overeat the savory stuff. I’m sticking to my plan to pace myself, so I’ll have room for dessert.

Next post From The Norwalk Hour: Gift Ideas for Cooks and Foodies