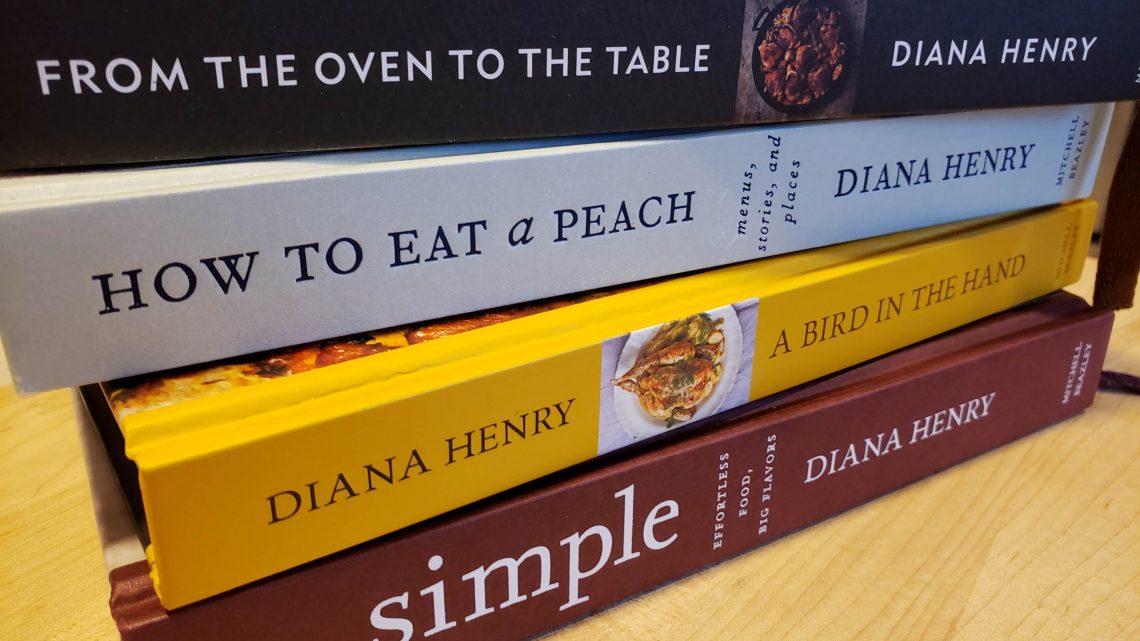 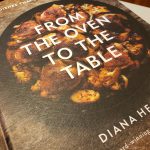 At a party a few years back, I was asked what dinner I would prepare for a group of friends. (These are the kinds of questions foodies ask.) Something with chicken thighs, I replied.  Unlike easy-to-dry-out chicken breasts, thighs are forgiving to cook, and their rich meat holds up to big flavors.

When I looked at Diana Henry’s cookbook, From the Oven to the Table, I knew I’d found a kindred spirit. There’s a whole chapter entitled, “My Favorite Ingredient — Chicken Thighs Forever.”  Then I discovered her book, A Bird in the Hand — 220 pages devoted to cooking chicken.  Clearly, I needed to dig into these books. 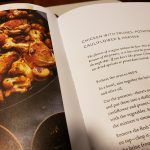 Chicken with prunes, potatoes, cauliflower and harissa was my first effort. I know. Prunes.  They have an image problem but delicious flavor. After cooking this dish, I have a new respect for these sweet dried plums.  The recipe, billed by Henry as, “The flavors of a tagine without the fuss,” includes turmeric, ginger, cinnamon and cumin. The heat from a few tablespoons of hot harissa, a North African chili pepper paste, is balanced by the sweet prunes. Preserved lemons, another North African delicacy, add a note of salty, tangy citrus to the proceedings.

Henry lives in cosmopolitan London where access to the flavors of the British Empire and the EU are readily available.  Her food reaches around the globe for big flavor wherever she can find it. You see things like pickled chilies, pomegranate molasses, three types of paprika and ‘nduja (a spicy Calabrian sausage) that might send you scrambling.  Pulses, I learned after some research, are the Brit word legumes.

She’s also a fan of easy cooking methods. From the Oven to the Table is essentially a sheet pan cookbook. It says on the cover, Simple Dishes that Look After Themselves. The recipes are more complicated than just putting food on a pan in the oven, but they’re worth the extra time and effort. The book has a bound-in ribbon bookmark, a signal to me that it’s meant for cooking, not just looking. 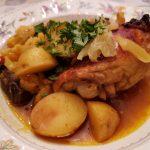 The chicken with prunes was a big hit. Our neighbor, a caterer who knows her way around good food, offered the ultimate compliment of asking for the recipe. Ignoring our dietary resolve, we all had seconds that night.

All recipes are personal statements and need to be interpreted by the reader. The chicken recipe called for slicing the potatoes 1/16 inch thick.  You’re kidding, I thought. But the accompanying picture (her books are lavishly illustrated with photos) showed new potatoes quartered. I went with that, and it worked just fine. It also called for eight chicken thighs to serve four. Thighs must be smaller in London, although the four of us did manage to put away, six leaving just two for leftovers. 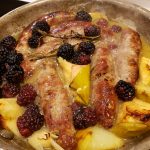 The following week I picked up some fresh fennel sausages at AS Foods on New Canaan Avenue to cook baked sausages, apples and blackberries with mustard and maple syrup. In A Bird in the Hand, Henry writes that Chicken Loves Fruit.  Her books are salted with essays like this sharing her philosophy and tying the recipes together. She’s eager to explain her thinking, recall memorable meals and share food experiences in addition to the recipes.

The sausage recipe from the Oven to Table book combines halved apples, onions and the sausages with the maple and mustard for an easy supper.  Put it in the oven for an hour, add the blackberries at the end and enjoy the feast. Again, sausages and apples in England must be smaller, but we ate the whole thing anyway.

In the introduction to A Bird in the Hand Henry explains that she has opted to buy more expensive chicken, but less often. I have been going down the same path. Frankly, I don’t want to dwell too much on how our meat is produced. But I do know that an organically fed, antibiotic free, humanely raised bird like Bell and Evans is better for me and better to cook with. More expensive, but worth it.

As a teenager, Henry was a compulsive writer of menus, collector of recipes, and keeper of food notebooks, books which she still has. She delves into food memories from her early days in Ireland and France to create a book of menus, meals, and food memoir entitled How to Eat a Peach. Roughly organized by season, each chapter recounts specific eating experiences and puts together a complete menu of complimentary seasonal dishes.  Even if you don’t make the meals, her evocative writing and tempting recipes will feed your cooking fantasies.

Now that recipes are readily available from a Google search, an Alexa request, or  from bloggers’ feeds it’s easy to think that cookbooks are passé. Henry’s books, packed with inspiring cooking ideas and new flavors, proves they’re not. 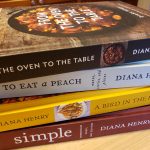 Next post From The Norwalk Hour: The Changing Restaurant Scene on Wall Street

Previous Article From The Norwalk Hour: Celebrate Birthdays with Joy, Love, and Cake

From The Norwalk Hour: Some favorites from a year of eating well