From The Hour: The Jazz Age – Live at New York’s Iguana 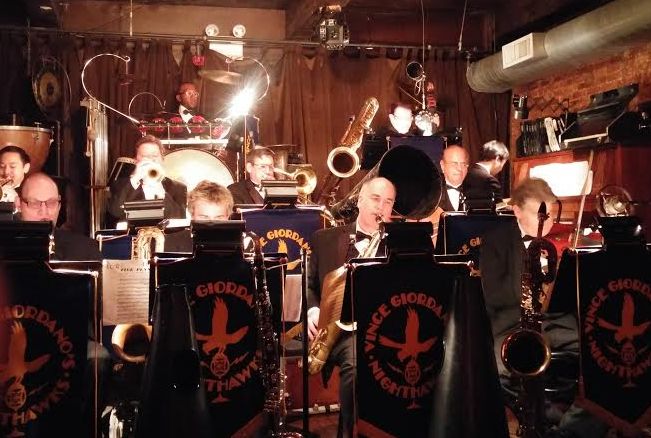 We’re at Iguana, a Mexican restaurant on 54th St. between 8th and Broadway, but were not there for the food, delicious as it is. The music is the draw. 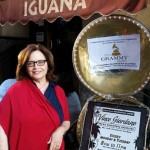 Every Monday and Tuesday the Iguana’s charming Mexican ambiance is taken over by the music and style of the Jazz Age. The Nighthawks, a big band right out of the 1920s, and its charismatic leader Vince Giordano, take the stage from 8:00 to 11:00 for three sets. The upstairs room is made over into a jazz party with a small dance floor, food, drink, a lively crowd, and a swingin’ band. You’re invited!

Giordano, a musician’s musician, is a bandleader, arranger and an authority on the jazz of the 1920s and 30s. He has led the Nighthawks on soundtracks for a dozen movies including Revolutionary Road, The Aviator, and The Good Shepherd as well as winning a Grammy Award for the soundtrack to the HBO hit Boardwalk Empire. Appearances on a Prairie Home Companion and Michael Feinstein’s PBS special, The American Songbook, are a testimony to his unique expertise and his special place in the jazz world.

He’s a world-class musician, and yet, here he is, before the show, greeting regulars and newcomers at the tables, making chitchat and jotting down requests in an impossibly small notebook. This is how it is in jazz:
top-notch musicians up close and personal – constantly working to build the audience on and off the bandstand, connecting with the fans and making sure everyone is having a good time.

As an historian of the jazz age, Giordano has amassed an archive of more that 60,000 scores, original recordings, and jazz memorabilia of the era, a collection so extensive and bulky that he bought the house next door to store everything. That’s a lot of stuff! Throughout his career he has sought out the aging generation of original performers to gain insight and add authenticity to his music. 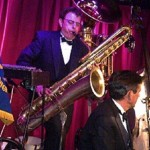 On the bandstand, the players wear tuxedos and play their hearts out. You can see that every member has a real love for the music and is a top notch musician. Each one gets a chance to solo and improvise over the course of the evening. Vince is jammed into a forest of instruments: an upright bass, a tuba and a rarely seen bass saxophone so heavy that it’s played from a floor stand. Crowded in with all that hardware is a library of scores ready for quick access.

Surrounded by all that gear, Vince keeps up an entertaining line of patter and jokes all spoken into a vintage microphone. Humor and history are laced with anecdotes about the music: who 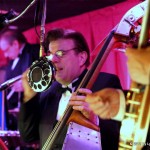 wrote it, the original performers, notable uses of the song, and memorable recordings. All this while the band members frantically flip through their song books for the score – no advance set list here.

Then, when the band is ready (or not), Vince says, “Let’s go, take the second ending”, counts off a tempo, and the band magically swings out. Without any visible leadership (Vince is in the back row to the right) the music pours out with band members taking solos, standing for sectional features, taking the repeats and finishing together. There must be a lot more that notes on those charts.

As an arranger, Vince is continually working on new versions of old songs. He gives a little background, “We just recorded this,” while at the same time scaling out the the scores to the band members like he’s tossing paper Frisbees. Some get to their destination while others go astray and have to be passed down the line. Then the band takes off. Some of the players have seen it before (at the recording session) but it’s the first time for others. The music swings out, bright, enthusiastic, virtuosic and intense. At the end, Vince says, “That was great. Put it in the book.” Band members tear out a now-banished score, pass them back up the band stand, and add in the new arrangement. 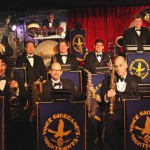 There are 11 members of the Nighthawks: four sax/clarinet, two trumpets, one trombone, guitar, drums, piano and Vince on the low notes. It’s a tight group with experienced musicians spanning a range of age, all with a love of the jazz age, and some bandleaders in their own right.

Performances at the Iguana can be like a house party. Every time we’ve been, Vince has introduced notable members of the audience: cabaret and big band singer Marilyn Maye, the producer of a Broadway review, the jazz critic for the Wall Street Journal and some of Vince’s jazz historian pals. Sometimes jazz performers in the audience sit in for a number.

With a $20.00 per person charge at the door and a reasonably-priced Mexican menu, this is the musical bargain of Manhattan. I can’t think of anywhere that you get this much bang for the buck and a big smile, too.

For the gig schedule, recordings and more information: vincegiordano.com/

Next post Hard Cider Update - At Last, Time to Taste

Previous Article From The Hour: Our Favorite Red Wines

From The Hour: Going out for Dinner and Jazz

From The Hour: Let’s go out for Mexican!