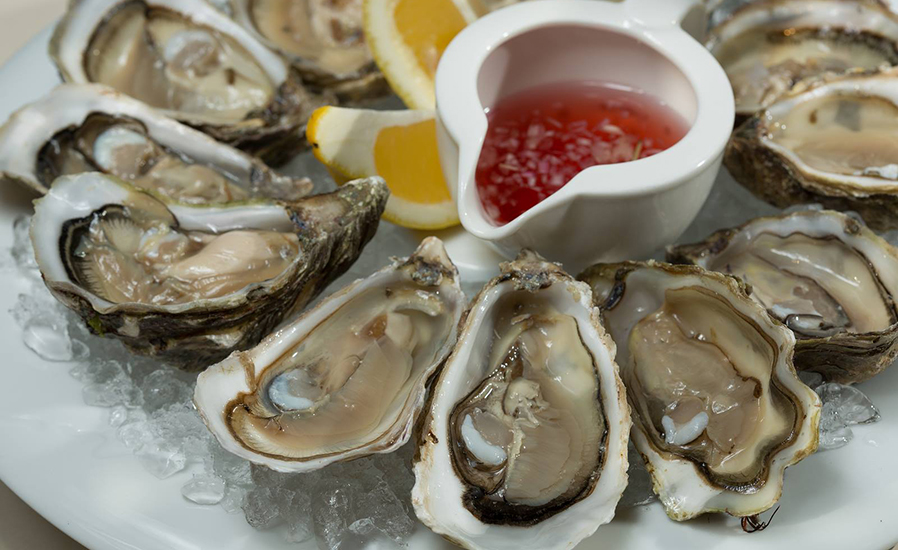 The Oyster Festival is here again! Every year on the weekend after Labor Day, twelve hundred or so volunteers from all across the community put their shoulders to the wheel, producing this Norwalk highlight. The Festival is popular for the entertainment, crafts, kids activities, waterfront attractions, and contests. But it’s the food that gets me excited.

Of course there are oysters. It is, after all, the Oyster Festival – celebrating Norwalk’s maritime heritage, history and culture, while raising money to support the Sheffield Island Lighthouse and the Norwalk Seaport Association. The shellfish, served by Flotilla 72 and the Norwalk Exchange Club, comes on the half shell, fried or in bisque. Lobster and clams, their fellow denizens of the deep, are there, too: steamed whole, in a classic lobster roll, shucked open, or in chowder.

The all-American classics – hamburgers, hot dogs and fries – are on the field, too: hot, tasty, and cooked right there by the Norwalk Seaport Association. Ethnic choices, reflecting the diversity of our area, include: Gyros, Souvlaki and Greek Salad from the St. George Church; Pizza Fritta from the St. Anne Society; Mexican, Cuban and Latino specialities from the Little Mexican Café, Valencia Luncheria and the Paradise Island Café.

Festival foods, the kind of thing you wouldn’t think of eating anywhere else, are there too: Funnel Cakes from the East Avenue Methodist Church; Snickers fried up by South Norwalk Ice Cream; kettle corn, baked potatoes, and to cool off, Italian and shaved ices.

There will also be irresistible fresh donuts, crèpes, po-boy sandwiches, meatball and sausage grinders, bratwurst and knockwurst hot off the grill, and mugs of root beer to wash it all down.

Makes me hungry to think about it.

The Festival is a fundraiser for numerous local organizations as well as the Seaport Association. Many of the food vendors are nonprofits using their festival proceeds to support both their organizations and other local needs. There’s a great trickle down effect from eating on the field. 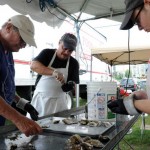 Coast Guard Flotilla 72 promotes boating and maritime safety in local waters on their boat the COGA II. Members are involved in public education, vessel safety checks (a free service to the public), water testing for the State of CT and for River Watch-Water Watch. Last year they went through 90 bushels of local oysters and 25 of clams, both supplied by Norwalk’s Norm Bloom and Sons. There’s a whole lotta shuckin’ goin’ on! While they have several master shuckers, more volunteers are always welcome.

Funnel Cakes – fried dough dusted with powdered sugar, an Oyster Festival standby – are made with care and love by by 30 volunteers from the East Avenue United Methodist Church. The proceeds from these enticing treats go to support local groups like the homeless shelter, the Person to Person food bank, and Pivot Ministries. They give around the world, too, by supporting the United Methodist Committee on Relief.

YACK (Young Entrepreneurs Cotton Candy) is a different kind of enterprise. Established 5 years ago as a way to foster both a solid work ethic and creativity among their kids, YACK is a family business led by Dad but run by teenagers Safada, Audrey, and Harrison. Giving a portion of their proceeds to hometown charities is part of their mission: “changing lives one donation at a time.” They do about 20 events a year across Connecticut, scheduling around the school calendar – selling cotton candy, donuts, popcorn, drinks, sno-cones and more. This year in Norwalk, they’ll have lemonade and fresh donuts (made right there) with a choice of 10 glaze flavors.

Mike Reilly, Oyster Festival Chairman for 2015, is a busy guy in the weeks leading up to the festival. I was lucky to catch him for a few minutes to talk about the festival food. “Its a big draw,” he said, “and has been from the very beginning of the festival. 50,000 or more come to the festival each year, and they all like to eat!” Mike didn’t want to play favorites with the food vendors, but he looks forward to a lobster and oysters every year. He also mentioned a Gyro from the St. George Church as a must-have as well as St. Ann’s Pizza Fritte. Wild Bill’s root beer and baked potatoes from Spuds came up, too. I wonder if he has to taste everything as part of the job?

Mike emphasized that the whole festival is a fund raiser – to the benefit of Norwalk and the wider world. It also builds a good deal of community spirit. The Seaport Association relies on the festival admission to fund its work on the Sheffield Lighthouse. He said that at least three food vendors -The Methodist Church, Flotilla 72, and St. Ann’s – have been at the Festival since the beginning. 38 years of service!

When my daughter went to college in Ohio, her mid-western friends thought the idea of an Oyster Festival was a hoot. They were more accustomed to honoring crops grown in the ground – sweet corn, strawberries, melons, pumpkins, apples and even sauerkraut at their local festivals. Here on the coast, we celebrate our connection to the sea, and – with the help of lots of volunteers – we eat well, have some fun, and support the community.

Next post From The Hour: Let’s go out for Mexican!

Previous Article From The Hour: Lunch in Essex

From The Hour: Celebrate the Oyster