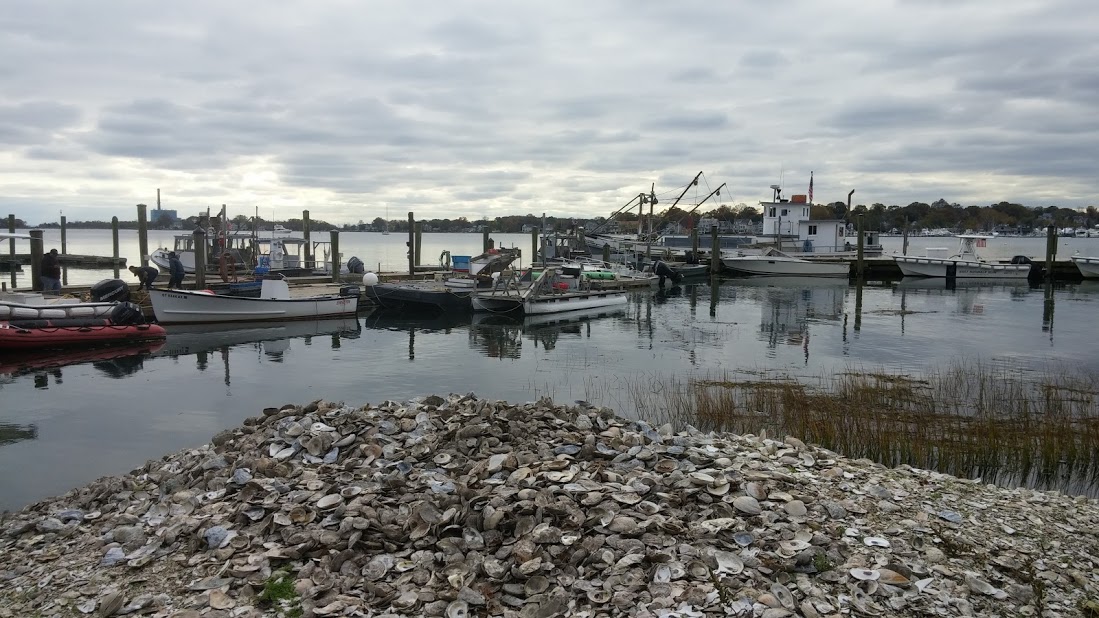 The view at Norm Bloom and Sons oyster dock 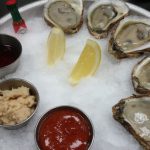 The oyster extended an invitation to take a taste of the sea.  Glossy in its natural juices, perfectly opened without a blemish, it was the foundation of a towering raw bar display at Washington Prime in SoNo.  The oyster was from local waters, of course, a Copps Island oyster harvested by Norm Bloom and Sons of Norwalk.

It had been awhile since I’d enjoyed oysters on the half shell and even longer since I’d seen one so beautifully opened. It got me to thinking about our local oyster industry.  As the Sound cools, oysters plump up and develop their sweet characteristic briny flavor.  Now is the time to eat them! 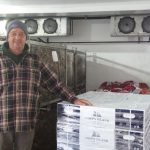 Norm Bloom and Sons is tucked away on the west side of the Norwalk Harbor – beyond Partners Cafe, past Harbor Harvest, right on Second Street, then left on Edgewater. Parking is tight, but they’re glad to see you.  I like to take a minute to savor the view: docks, boats, tranquil marshes, and the hustle and bustle of the oystermen.

Norm is the fourth generation to farm oysters in these waters. He’s very good at it, establishing his premium Copps Island brand as one of the best on the East Coast. “Texas is a big market for us,” he’ll tell you.  “This truck goes to New Jersey, this one to Boston, and this one to Manhattan,” he continues.

There’s a small retail store where you can buy Copps Island T-shirts and other gear along with the oysters – $.60 each and as many as you want. You can call ahead and your order will be ready, but I don’t’ mind waiting.  I like to hang around and watch the activity. 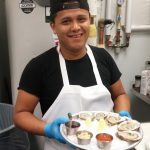 The only problem with oysters is opening them.  It seems intimidating, but there’s a knack and you get better with practice.  I went back to Washington Prime to see if I could get a lesson from their expert opener.  Owner Rob Moss introduced me to Chef Armando Sanchez who brought over Darwin, their master shucker.

A charming young man with a bright smile, he gathered his tools and brought out a handful of oysters to give me a lesson. Oyster knives haven’t changed much over the years. Norm Bloom showed me a battered one in his oystering museum that might have been 100 years old. It looked remarkably like Darwin’s. 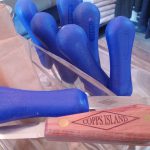 An oyster knife has a thick, symmetrical, slightly curved, pointed tip. It’s not sharp for cutting like a kitchen knife, but the point can do some damage if it slips, so you have to protect your hands.  The pros rest the oyster, cup side down, on a folded kitchen towel, bring the towel around the oyster and then over their hand, keeping the oyster from slipping and keeping a layer of cloth between hand and knife tip. 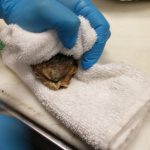 The tip of the knife is inserted into the hinge at the back of the oyster. Do some wiggling and rocking of the knife to seat it properly and then twist to pry apart. Slide the knife along the top shell to cut off the abductor muscle, and the lid comes free.  Carefully slip the knife under the oyster to cut it free from the bottom shell.  Don’t spill the precious juice (called liquor in the trade).

Sounds easy, but it does take some practice. The pros can do several a minute without even looking. The whole process is pictured on the Copps Island website. Master this and you’ll be the hit of every party, just by bringing a bucket of oysters and your knife. While practicing your skill, you’ll eat well. 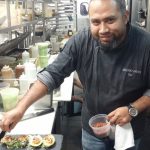 After watching Darwin, Chef Sanchez took me over to the cooking line to show their cooked oyster options.  Oysters Rockefeller is an American steakhouse classic – topped with creamed spinach, Parmesan cheese, bacon, and bread crumbs and popped into a hot oven for a few minutes. Crispy Masa Oysters are breaded with Masa (coarse cornmeal flour), deep fried, put back in the shell over chipotle crema and topped with pico de gallo. 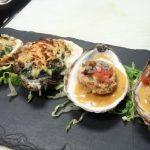 The raw oysters come with mignonette (my favorite), horseradish, and cocktail sauces. The Rockefeller were piping hot, rich, and irresistibly cheesy.  The kick of the chipotle perfectly spiced the crisp fried oysters.  Rob confided to me that some customers add a splash of vodka to the remaining sauce in the shell and slurp it down as a chaser.

Oysters are Norwalk’s most notable food product. We should all be proud, promote them when we can, and eat them at every opportunity. Stop by the docks to pick some up, or look for Copps Island oysters on restaurant menus in town and up and down the east coast. They’re a festive treat for the holiday season. 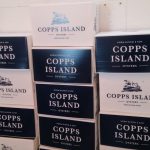 Next post From The Norwalk Hour: Food Friendly Christmas Gifts

Previous Article From The Norwalk Hour: The Miracle of America’s Salad Bowl