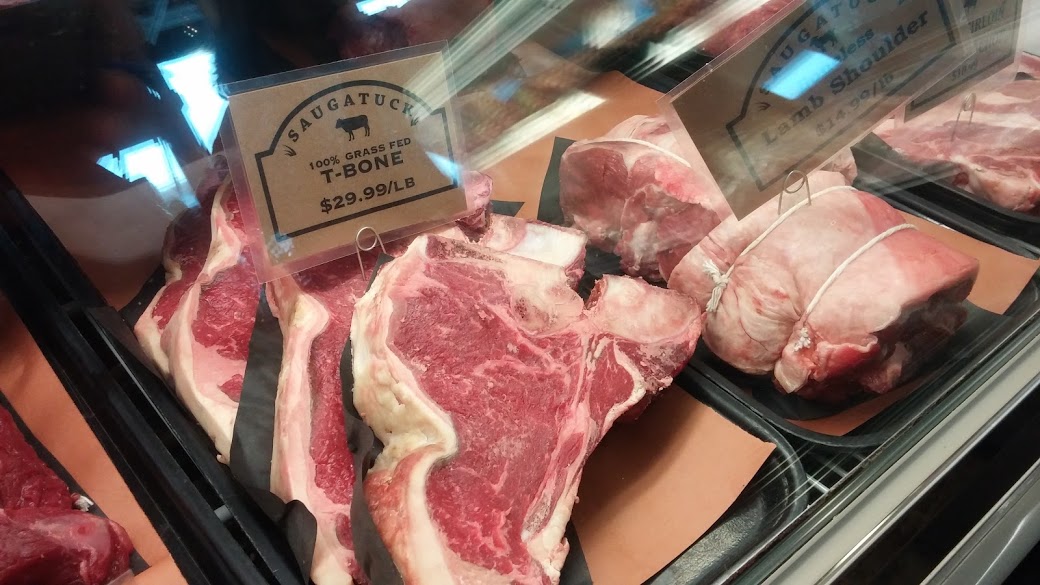 The steaks were lined up like soldiers on parade. They were deep red with streaks of marbling, surrounded by creamy white fat – a regiment of T-bone, New York strip, filet mignon, and ribeye steaks, plus a platoon of pork and lamb chops. Grass-fed or grain-finished and hand-cut by master butchers, they brought out the inner carnivore in me.

The art of the butcher is enjoying a renaissance. After years of assembly line meat cutting yielding plastic packaged supermarket displays, a few butchers have revived the time-honored skill of taking a whole animal and breaking it down into its many parts: steaks, roasts, braising cuts, and the trimmings for sausage, ragu and paté. It’s a craft usually acquired in an apprentice system – the master teaching and training the student in skills, secrets, and lore learned over a lifetime. 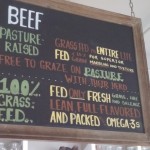 Beef, too, is undergoing a change. The cattle business is branching out from grain-fed mass production to grass-fed more naturally raised animals. Grass-fed beef is leaner with less marbling (fat streaked through the meat), a darker color, and a more beefy flavor. Without the marbling, the meat can seem to be less juicy. Care is needed not to overcook it.

Naturally-raised beef can be described many ways: 100% grass fed, grain finished, free range, and more. Regardless of the farming technique, this meat is better for you and better for the planet. In addition to less cholesterol, higher omega 3, and no added hormones or antibiotics, it also has a smaller carbon footprint. Raising animals this way takes longer and, understandably, costs more. Most importantly, the local craft butchers have established relationships with regional farmers who are raising animals in a humane and sustainable way and strengthening our local food community. 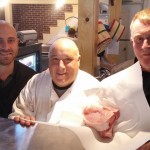 Ernie, Sal and Bob at Harbor Harvest with my pork chops

Bob Kunkel’s grandfather was a professional butcher. Now he is reaching back to his family’s roots with a full-service butcher shop at Harbor Harvest, his new store in Norwalk. Just opened at 7 Cove Ave. (a few doors down from Partners Cafe), the store has a full-time butcher cutting local, sustainably-raised meat. Kunkel and his partner Ernie Marsan have scoured the region for farm-raised beef and pork, building relationships with the farmers and seeking out the best for their customers. “Nose to tail” is their approach, using the entire animal for cuts of meat, ingredients for their soups, and prepared specialities. While checking out the display of tempting meats, you’ll enjoy the aroma of the fresh-made soups on the stove.

Head butcher Sal Cataldo chose a couple of grain-fed pork chops from Meili Farm in Amenia, NY for me. They were almost two inches thick with a large finely-marbled eye. His hearty pork and bean soup with pasta was based on a rich and porky stock made from the bones and trimmings. The chops were delicious and tender with a marvelous flavor and toothsome texture. Pan-seared and finished in the oven, I made a quick pan sauce with apple cider and mustard. (visit FranksFeast.com for the recipe). The Market also features beef from Kiernan Farm in Ulster County, NY, 100% grass-fed, rich in natural vitamins, and aged for maximum flavor. 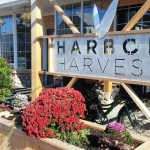 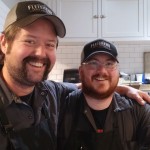 Fleishers Craft Butchery in Westport (www.fleishers.com) at 580 Riverside Ave. is a pioneer in the craft-butchery trend. Founded in 2004 in Kingston, NY by two partners, their goal was to revive traditional butchery using sustainably-raised whole animals. They now have four locations including the one in Westport where master butchers make the finest quality meat into beautiful cuts.

Manager Rick Sastre explained to me about their use of local meat, sustainably and humanely raised. Their meat comes from within 150 miles, is 100% pasture raised and grass fed. The polar opposite of 95% of our american beef that is factory raised, grain fed, and treated with chemicals. He also discussed Fleischers efforts to train a new generation of butchers that will be able to 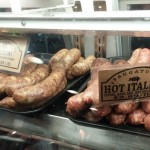 cut all types of meat and efficiently use the entire animal. They also smoke their own bacon, make sausages in a variety of styles, and supply their on-site restaurant. Stop in the store and be dazzled by the beef, lamb, and pork, seduced by the sausages, and tempted to indulge in more meat that you ever thought. The flavors are remarkable.

At this time of year turkey is the meat on everyone’s mind. For a very special centerpiece of the Thanksgiving menu, Fleishers offers a Heritage Breed turkey from BN Ranch in Bolinas, CA that has the smaller breast and fuller flavor of days gone by. They also have an organic Broad Breasted White turkey from Long Island, a modern breed sustainably raised. Check in with Harbor Harvest as they source some local birds for Thanksgiving. Stew Leonard’s has long been a favorite source for a variety of Thanksgiving turkeys: This year the choices include Stew’s own Naked Free Range, All Natural Fresh from Shenandoah Valley, and Organic Free Range from the Lehigh Valley.

I recently saw the phrase “Rock Star Butchers” in the New York Times. A few years ago you had to look pretty hard to find any butchers at all. Now they’re riding the rising tide of interest in local, sustainable food that tastes good, is good for you and good for the planet. You may never get to meet a rock star, but it’s easy to meet these butchers – and you get a great steak too! 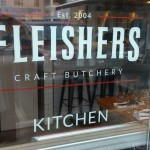