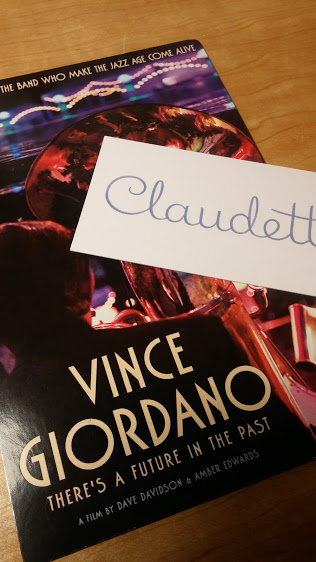 This year we didn’t get into New York for our annual holiday season dinner. After New Year’s though, visiting family had all gone home, our regular routine was coming back, and a trip to the Big Apple seemed like a good way to ring out the holidays.

We were going to a movie in New York and looking for a nice dinner after. The theater, on 12th Street just south of Gramercy Park and north of Washington Square, was right next door to Danny Meyer’s iconic Gotham Bar and Grill. Iconic, also means expensive and pretty dressy – more than we were up for after a movie.

Surprisingly, there weren’t that many other restaurants in the neighborhood for a memorable evening. A few blocks east there were lots of ethnic options and over the other way, the West Village was loaded with trendy dining spots. But that seemed too far to walk on a cold January night.

Claudette at 5th Avenue and 9th Street turned out to be the perfect spot. Offering up a cozy south-of-France style and the promise of French cuisine accented with the flavors of North Africa, it was a quick, if chilly, walk down Fifth Avenue,. 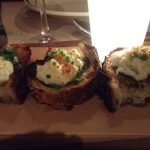 A thoughtfully chosen wine-by-the-glass list may make it tough to pick, but it often predicts a good restaurant experience. Marsha’s choice, the Trimbach Pinot Blanc (Total Wine) from Alsace, made her eyes light up at the first sip. My Beaujolais, surprisingly served chilled – maybe a little too cold – was a promising start for the evening.

The menu was not long but was filled with intriguing choices. Resolutions to share an appetizer were quickly abandoned. Bacalao from the du Jardin (small plates) menu section, Chicken Liver Mousse from the Pains Tunisiens, and a Beet Salad from the Hors d’Oeuvres all made the cut. Three – not one to share! No hope for a light dinner for us! 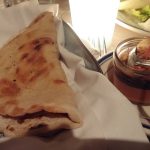 Bacalao, air dried and salted cod, has been a staple for centuries on the Atlantic and Mediterranean coasts. Soaked, pureed, and usually mixed with potatoes, it’s found all around the Atlantic Rim. The Bacalao Tartine, with a delicate, smoky, fish flavor, was spread on toasted country bread with a zippy fresh garlic sauce.

Silky-smooth, sealed with wine jelly in a small glass crock, and garnished with radish shavings, the chicken liver mousse was decadently unctuous. We had to bargain over the last bite to spread on the warm Pain Tunisian (pita bread).

The Warm Beet Salad was really two salads. Cubes of beets around the rim of the plate were doused with a warm horseradish sauce. In the center crisp romaine boats on a bed of butter lettuce were filled with shaved lettuce, good Parmesan, and slivered almonds. 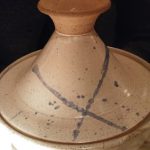 A tagine with 60s style

Despite all this indulgent bounty we each ordered a main course. Marsha’s Sasso Chicken Tagine, an aromatic braise, was served in a modern version of the traditional conical tagine dish, looking a little like architecture from the 60s. The tender chicken, resting on a bed of couscous, was bathed in the fragrant and spicy braising liquid studded with golden raisins, toasted almonds, and a handful of marvelous crunchy fried chickpeas that had been tossed on at the last minute.

Meltingly tender braised oxtail, green olives, and San Marzano tomatoes were tossed with homemade cavatelli pasta in my very satisfying dinner. I’m a sucker for homemade pasta and braised meat. Put them together, and I’m there! 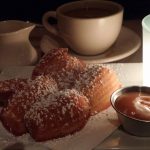 Trying to regain control, we disdained the dessert menu. But our resolve faded in favor of the seemingly modest idea of a fresh-baked Brown Butter Madeleine. “We’ll share one,” we told Ted, our waiter. “But there are six on the plate,” he said. By this time were were too heavily invested in the idea to resist and gave Ted the go-ahead. They were delicious and mercifully small – delicate I should say. Warm, crisp on the edges, and soft in the middle – only improved by a dip in the small crock of caramel sauce on the side. “Some folks stir the caramel into their coffee,” Ted volunteered.

Leading up to this delightful dinner, we had been to see, “There’s a Future in the Past,” a new documentary on the life and work of Vince Giordano, the leader of the Nighthawks jazz band. He’s a first-rate musician, playing the bass, bass sax, and tuba, in addition to calling the tunes, setting the tempos and lugging the gear. Oh, and he sings, too! 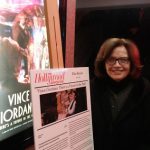 Marsha at the movie

Vince’s life’s work has been to collect, preserve, and perform the jazz of the 20s and 30s. His archive of over 60,000 arrangements along with recordings, memorabilia, and sheet music is the largest of its kind. He’s the go-to guy for producers and directors like Woody Allen, Martin Scorsese, and in shows like Boardwalk Empire needing authentic performances for the period.

We’ve gotten to know Vince and his music through his regular Monday and Tuesday night gigs at the Iguana on 54th at Broadway. Here, his fans, music insiders, and New York celebrities gather to hear authentic, joyful and historically accurate performances of almost forgotten bandleaders and arrangers.

Award winning Filmmakers and PBS documentarians Dave Davidson and Amber Edwards set out to make a biopic of Vince’s career, both archiving and performing, to celebrate his unique contribution to 20th century music. The only criticism I have of the feature length movie is that it’s too short. Another hour of Vince’s story and the exciting music of the Nighthawks would be about right.

If you get a chance to see the movie, do it. If you can get to dinner at Claudette, go. If you can do both on the same evening, you’ll be as lucky as we were. 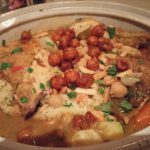 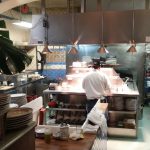 The open kitchen at Claudette

Next post From The Hour: Let Them Eat Cupcakes

Previous Article From The Hour: A Taste of Peru