From The Hour: A Taste of Peru 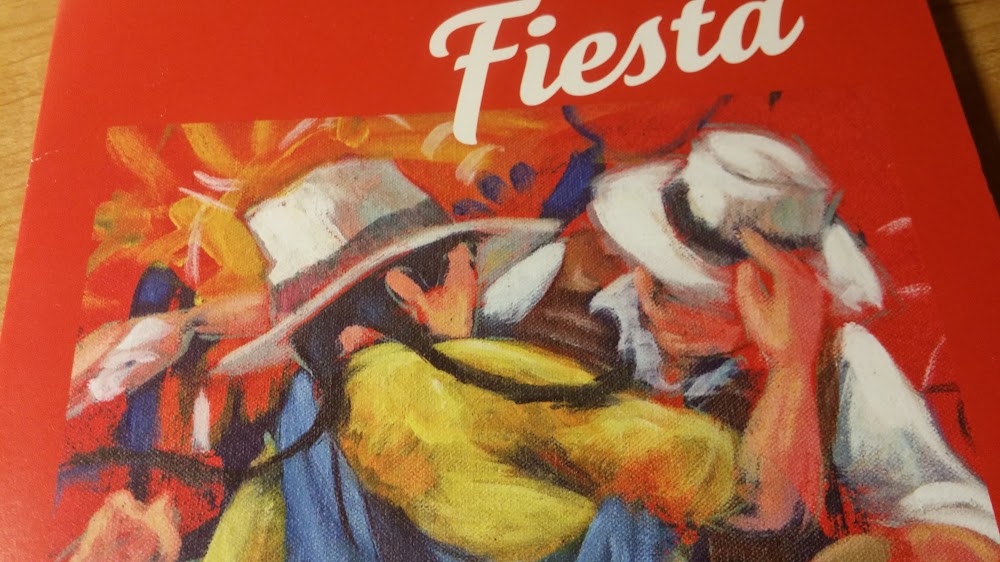 The spirit of Peru at Fiesta Limena 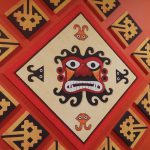 “We don’t know much about Peruvian food,” I said to our waiter. “That’s too bad,” Daniel said, suggesting that we’d been missing out. He gave us a brief rundown of traditional Peruvian food and some specific suggestions from the menu at Fiesta Limeña to start our exploration. A friend from Peru had suggested Fiesta Limeña at 330 Connecticut Ave. (across from Best Buy) with the recommendation, “It’s the closest thing food from home.”

Peru, on the Pacific coast of South America, is divided by the spine of the Andes mountains into three regions, each with distinctive food traditions: the narrow, arid strip along the Pacific ocean; the steep and lofty Andes Mountains including the Inca ruins at Machu Picchu; and the rain forest of the Amazon basin to the east.

Like all new-world countries, the culture and food have been shaped by waves of colonization and immigration that folded native cooking and local ingredients into imported dishes for a unique and rich cuisine. In Peru, the influences came across the Pacific from Asia as well as across the Atlantic from Europe for a truly international cuisine. 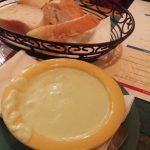 Our dinner began with a basket of fresh baked bread and Aji Amarillo pepper sauce, a bright-yellow ubiquitous Peruvian condiment. Following Daniel’s advice, we ordered Papa a la Huancaina – cold boiled potatoes in a peppery cheese sauce garnished with a hard boiled egg and a black olive. Potatoes, a staple in Peru, are indigenous plants that the Spaniards exported to Europe. Peruvian-born manager, Jean Pierre Dominguez, told us that there are 20,000 varieties grown in Peru. 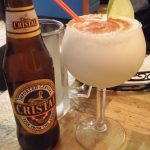 Unlike Chile just to the south, there’s not a big wine industry in Peru, but there is, of course, beer. I ordered a refreshing Cristal lager. Marsha enjoyed a delicious Pisco Sour, made with Pisco, the popular Peruvian brandy, and lime juice. 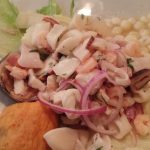 Ceviche, seafood marinated in lime juice and spices, is probably the best known Peruvian dish. The cold-water nutrient-rich Peruvian (Humboldt) current brushes the coast bringing with it a bounty of seafood. Shrimp, scallops, squid, octopus, fin fish and even clams all appear in ceviche. Marinated with limes, peppers, cilantro and onions, the seafood is not actually cooked, but the citric acid marinade has the same effect on the protein. Cold boiled sweet potato, yucca, and large kernels of Peruvian Inca corn traditionally accompany ceviche. 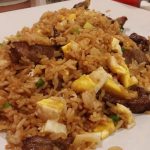 Chaufa is a popular fried rice dish from Peru’s Pacific Rim heritage. Flavored with soy, peppers, onion, and local spices, it can be made with chicken, beef, pork, or shrimp, and egg. I can’t get enough!

With a larger group we also visited Mochica, a new Peruvian restaurant at 75 Main Street (former Nicholas Roberts). We repeated our Fiesta Limeña order for the sake of a very favorable comparison. 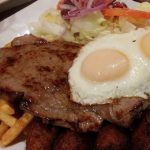 But with a larger group the order expanded to include some new dishes, too. Thanks to my friendly companions, I got a taste of everything. Popular Lomo Saltado, strips of steak sautéed with onions, peppers, tomatoes, and Peruvian seasonings was very tasty. Bistek a lo Pobre had a nice contrast between the grilled steak, rich sunnyside eggs, and sweet fried plantains. Tallarin Saltado de Carne was another nod to the far east with lo mein style noodles as the base for sautéed steak and peppers. 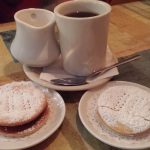 Daniel made sure we finished our dinner at Fiesta Limeña with Alfajores – sandwich cookies filled with dulce de leche that are popular across South America. The Peruvian version is made with thin, delicate, crisp, very short, irresistible cookies, dusted with powdered sugar. Betcha can’t eat just one!

Both restaurants are decorated with bright colors and Peruvian art. Spirited Peruvian panpipe music continues the theme The bustling dining room at Fiesta Limeña is lined with comfortable booths, while Mochica is more sleek and modern. Both places do an active take-out business. 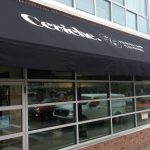 Renzo, another friend from Peru, recommended Ceviche Peruvian Cuisine at 91 North Main St. in SoNo as very authentic. There are two other Peruvian kitchens in Norwalk that I haven’t had a chance to visit yet: La Bamba at 21 North Main, and Aromas at 225 Main Ave. in the Walgreens Plaza.

I was surprised to to count five Peruvian restaurants in Norwalk. Undoubtedly supported by the local Peruvian community, they clearly have a broader reach, too. The modest prices, generous portions, and delicious world cuisine are a big draw. I’m eager to make up for lost time by going back to delve deeper into their extensive menus. 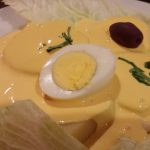 Next post From The Hour: Dinner and a Movie in New York