From The Hour: Cornbread Nation 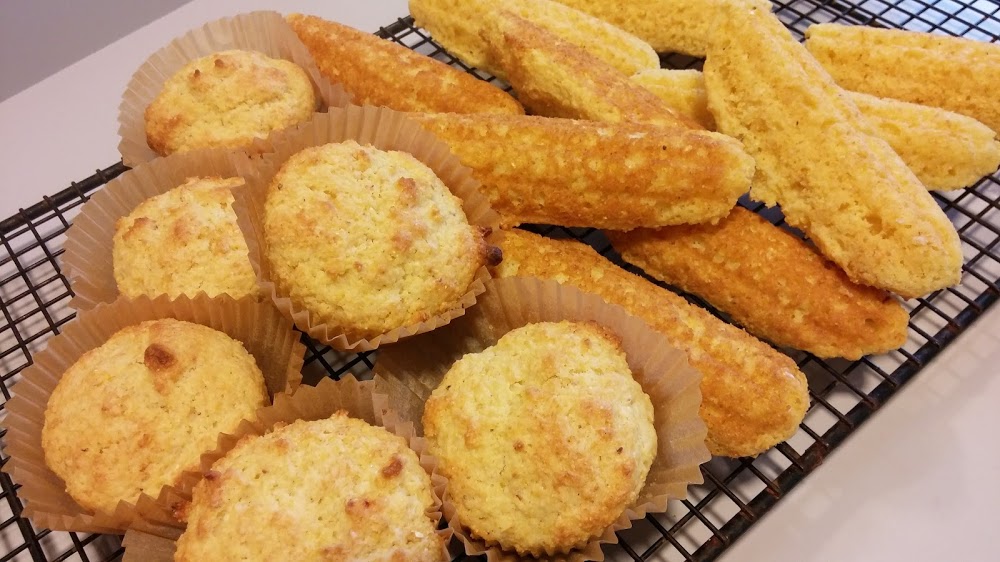 Yellow, rich, tender, and flavorful, cornbread is an American staple and a classic comfort food. Popular across the nation, cornbread is most strongly identified with the South and is enjoying a renaissance as the must-have side to slow-cooked Barbecue.

Like so many easy recipes, top notch ingredients make the difference. Stone ground cornmeal brings the flavor of days gone by along with the nutritional benefit of the whole kernel. Buttermilk adds a welcome tang. Farm fresh eggs give added lift and flavor. Bacon fat contributes a smoky character. But the big question is whether or not to include sugar.

Down south, the purists contend that true cornbread is unsweetened – a savory bread going back to the early days of rural cooking. Up north, a little sugar is expected, at least by me, to make the cornbread more user friendly and appealing. There’s no right or wrong answer here, just upbringing and personal preference. I’ve even noticed some sugar sneaking in down south.

A basic cornbread recipe includes corn meal – yellow, white, or blue. All but the most historic include some wheat flour for better texture, but the ratio is up for debate. Either milk or buttermilk can be used. Buttermilk adds flavor and also excites the baking soda for better leavening (Kate’s is my favorite brand). Butter, of course, and maybe some bacon fat to grease the pan, add a little flavor and help make a crisp, well-browned crust. Eggs, salt, and baking powder round out the essentials.

Baking the cornbread in a cast iron pan is traditional (be sure to heat the pan first), but too much bother for me. A round or square cake pan or a pie pan is fine. I also have some cast metal corn stick pans that make small loaves shaped like ears of corn. 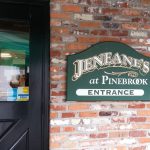 On our last trip to Georgia, I was introduced to the hoe cake, a cornbread variation, at Jeneane’s http://www.jeneanes.com/ restaurant in Macon. Jeneane’s at Pinebrook is a restaurant unlike anything north of the Mason Dixon line. You get home style, country cooking – tasty, authentic, and ready to serve. 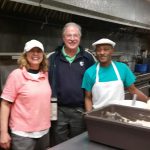 “We serve working people here, seniors, and lots of families – folks who want good food, quick service, low prices, and consistency. The menu changes daily, but they want to know that the meatloaf and other favorites are available 3 or 4 days a week,” says owner Jeneane Barber. Popular menu items include Roast Pork Loin with dressing, Country Fried Steak, Catfish, Baked Chicken, Meatloaf with gravy, Chicken and dumplings, and Breaded & Fried Pork Chops. The place is humming for lunch and dinner daily. 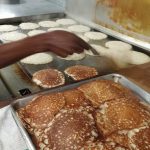 Hoe cakes ready for the basket.

One meat and two sides is $7.75. Nineteen choices of sides include southern favorites: collards, cheese grits, field peas with snaps, butter beans, macaroni & cheese, carrot salad, cole slaw and many more. Pies ($2.25 additional) dominate the dessert menu – pecan, chocolate, and coconut on the day I was there, along with banana pudding and strawberry shortcake.

At Jeneane’s every table gets a basket with pillowy southern-style biscuits and a heap of hoe cakes. The hoe cakes, called cornbread at Jeneane’s, are made from thinned out corn bread batter cooked on a griddle.

Like so many traditional foods, there are lots of interpretations for hoe cakes. Some raise up like pancakes, but Jeneane’s are thin, well-browned and lacey on the edges. Were they ever cooked on a hoe? Maybe. The jury is still out on that. 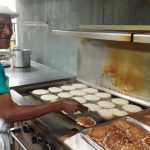 For Jeneane’s hoe cakes, the stiff, somewhat dry cornbread mix, is made early in the morning and allowed to proof for an hour and a half or so. After the batter has fermented and leavened, Carl, master of the hoe cakes for fifteen years, thins it out. He puts a couple of big spoonfuls into a gallon stainless steel bootleg pot and thins it out with water. He knows the consistency he’s shooting for. Experience counts! 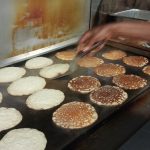 The batter is ladled out a quarter cup at a time onto a well-oiled 350° griddle. Carl turns them when they’re just past golden brown and lets them cook till the second side is a pretty color, too. At Jeneane’s they stack them on trays until service. 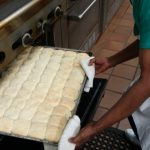 While Carl is cooking the hoe cakes, he’s also minding the biscuits. Tender and lightly browned, they are perfect examples of southern baking. He opens the oven under the griddle, slides out a sheet pan of biscuits, and turns them for even browning. Every morning 2,000 biscuits come from his experienced hands. 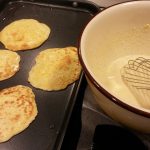 Inspired by my visit to Jeneane’s, I made a batch of hoe cakes at home. Adapting my regular cornbread recipe with some notes from Jeneane, I let the mix rest as Jeneane instructed. After thinning it by eye as I learned from Carl, I poured the batter on a griddle. The results were acceptable for a beginner. It took a few tries to get the consistency and the griddle temperature just right. Quite tasty right off the heat, I couldn’t resist smearing on some jam and eating one still-warm, while the rest cooked.

Delicious, easy to make, and always welcome, cornbread should be in the repertoire of every cook. It’s so fundamental to southern cooking that The Southern Foodways Alliance https://www.southernfoodways.org/ took the title Cornbread Nation for their published collection of the best Southern Food Writing. I count myself as a happy citizen. 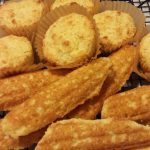 Next post From The Hour: A Taste of Peru