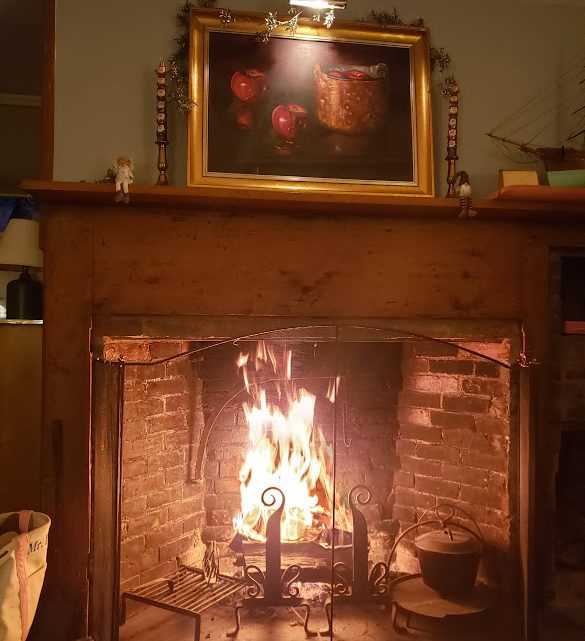 Yesterday was New Year’s Day; it said so on the calendar. But today there’s the Tournament of Roses parade, day-long college football, and no mail delivery. Any year that begins with two holidays is off to a great start. 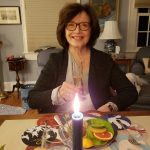 On Sunday, Marsha simmered up a batch of the family-recipe New Year’s Day soup. With a nod to tradition, it’s a hearty tomato-based mix of black-eyed peas, diced ham and a handful of spinach at the last minute.

On New Year’s Eve our plans fell victim to head colds and scratchy throats. Instead of giving in, we set up a card table in front of the fireplace and, as Marsha says, “made an effort” to dress up and make it an occasion.

The menu, originally planned to share with another couple, was easy enough to scale down for two: shrimp cocktail, Alaska salmon with hasselback potatoes and green beans, and a bread pudding made with the remnants of our Sono Baking Company Christmas panettone. 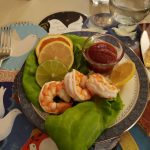 A fragrant bottle of Roederer Estate Brut Rosé, the same sparkling wine served at the recent state dinner for the President of France, was a festive companion.  It was a lovely dinner, but I’ll confess that we were in bed well before the year rolled over.

The end of our Christmas Eve ham from Nodine’s Smokehouse was the base for the New Year’s Day soup.  Three kinds of canned tomatoes – stewed, diced and sauce – added richness and texture.  The black-eyed peas, traditional bringers of good fortune, were an essential component. Three grain bread from Wave Hill Bakery sopped up the broth.  Shared with Marsha’s sister and her husband, it was the right start on the real holiday. 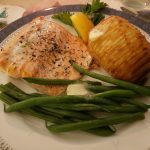 A bottle of floral, honeyed Pine Ridge Chenin Blanc + Viognier (thankfully only 12% alcohol) was just the ticket with the soup.

For dessert, the gently-warmed remaining bread pudding was either dressed with strawberry sauce or doused with cream, or both.  Marsha’s spiced nuts, a family favorite, and the box of See’s candy from under the Christmas tree were passed around until we all said, “Uncle.”

On this “second” New Year’s Day, we’ll look to the bounty of holiday leftovers to feed us, more time to enjoy the Christmas decorations, along with the Rose Bowl parade and the big game.

Previous Article From Sunday Arts and Style: A decade of memorable eating