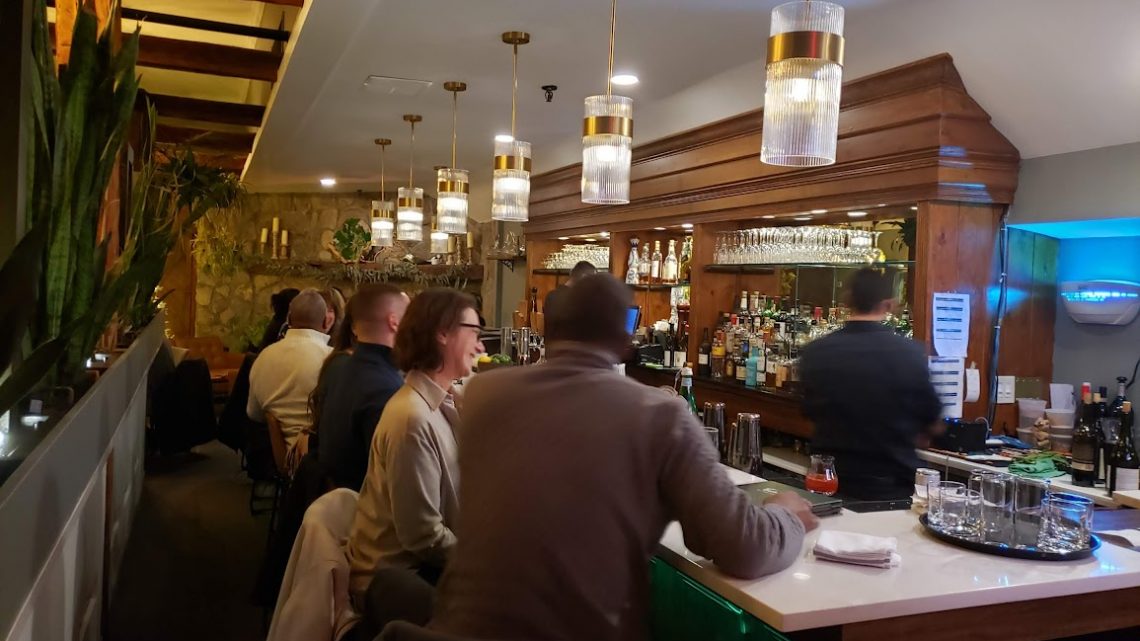 The busy bar at The Farmhouse 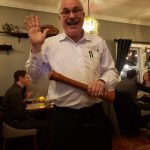 With his close-cropped gray hair, sparkling eyes and broad grin, John, our waiter at Farmhouse at the Crossroads, made us feel welcome right off the bat. An obvious pro, he vividly described the house cocktails, guided us through the daily specials, knew the answers to wine questions and tempted us with dessert.

The Farmhouse is an old restaurant made new. Up on Long Ridge Road in Stamford almost to the New York line, it has been the Country Kitchen, Country Tavern and Long Ridge Tavern since we’ve known it – each a post and beam, antique-filled slice of yesteryear. Now the bones are familiar, but the look is not.

Long overdue for a makeover, there’s enough of the former to get oriented, but now it’s fitted out with contemporary, comfortable and sometimes whimsical style. 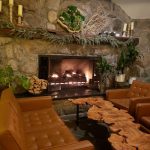 Each of the four dining rooms has its own contemporary look. The most rustic still has the old stone walls, low ceiling and hand-hewn beams. The more modern and largest space has a bluish marble wall that at first glance looks like a waterfall. The cozy room just inside the entrance has a few tables with ceiling-hung swinging chairs. We sat in the buzzy main room just opposite the bar where two-tiered chandeliers now occupy the ceiling space that once held an antique carriage. Seating throughout is at comfortable upholstered chairs.

You can have a drink on leather sofas flanking the live-edge slab coffee table in front of the massive fireplace If your table isn’t quite ready; it’s been there since the beginning. 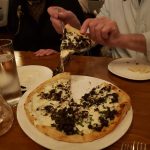 The menu is eclectic and a little pricey, but well-executed, a challenge for a large restaurant like this on a busy Friday night when every seat was taken.

The four of us shared a Forager Pizza ($22) generously topped with wild mushrooms, burrata, house-made ricotta, scallion and truffle essence.  A slice and a half for each of the well-flavored pie got us off to a good start. 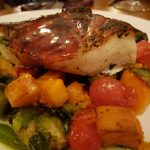 John made the specials so tempting that three out of the four ordered one.  Watch out.  As is often the case, the prices for specials are at the high end of the printed menu where entrees range from $24 to $48.

The four-cheese sauce on my shrimp-topped gnocchi ($45) was a just-right blend – with a deep cheese flavor, but not heavy and gloppy. I wanted to lick the bowl.

Marsha’s chilean sea bass ($55) came with a port wine reduction and a lavish helping of braised brussels sprouts, butternut squash, asparagus and cherry tomatoes. I’m always intrigued by a dish that pairs fish with red wine. This perfectly-cooked fillet was a winner. 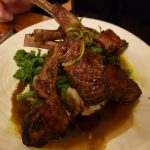 Four well-browned rack lamb chops ($52) rested on a hillock of mashed potatoes surrounded by a moat of glossy sauce on Joelle’s plate.

John was able to guide me to a less-oaky French chardonnay, and Joelle to a cabernet “not too big” to match up with the lamb. A glass of Barolo was equally satisfying. 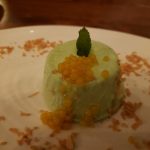 As the plates were cleared John made his pitch for dessert. Our resolve melted in the face of his recommendations. Key Lime ($15) was a limey tart, panna cotta-like, accompanied by date and almond crumble, honey coconut pearls and toasted coconut.  Pain Perdu Doughnuts ($14) were deep-fried grand marnier French toast squares with dulce de leche, a dusting of coconut, and strawberry jam.  Luckily, there were four pieces, one for each.

I’m always happy to see a venerable restaurant skillfully given new life. The era for old barns filled with antiques is over. Restaurants like that have been disappearing for a while now, victims of changing tastes and aging buildings. 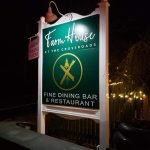 A few that occupy special locations have been saved and revived. The Silvermine Tavern in Norwalk was creatively re-imagined into the Gray Barns Tavern. The Inn at Pound Ridge (formerly Emily Shaw’s) lives on under the guidance of celebrity chef Jean Georges.  Now the Long Ridge Tavern has been given a new lease on life as the Farmhouse at the Crossroads. Next up, I hear there’s a serious attempt to re-open the Cobbs Mill Inn in Weston. I hope it’s successful.

Next post From FranksFeast.com: This British cookbook makes my mouth water