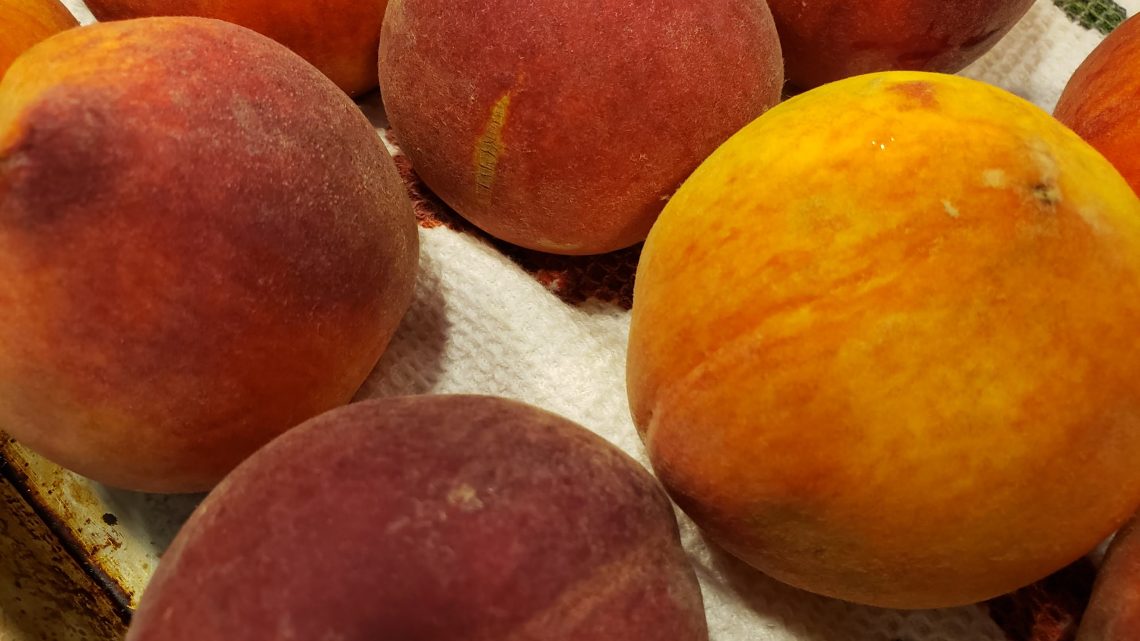 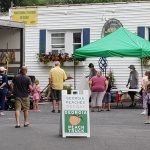 “The Peach Truck is coming to Westport!” Marsha enthusiastically exclaimed.  When I raised my eyebrows, she went on to point out that the Georgia Peach Truck was making its early July appearance at Gilbertie’s Garden Center.  It carried a load of peak-season, just-picked fruit direct from the peach state.

“Let’s go.” I quickly agreed. There’s nothing like a perfectly ripe peach — succulent and juicy, with sweet-tart golden flesh and an enticing aroma. Straight from the orchards, these would be the real thing.

With visions of peaches so fresh and juicy they have to be eaten over the sink, we headed up I-95. 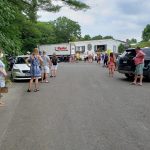 The crowd was surprising with the socially-distanced line (actually two lines) running all the way down Gilbertie’s driveway to the street.

Most folks had pre-ordered and got to join the quicker line. Not us.

The industrial-size refrigerated truck was a little late, a victim of the famous Connecticut traffic I’ll bet.  But once they got set up, boxes of peaches stacked six feet high on pallets were forklifted out of the truck and quickly distributed.

In honor of the occasion, I wore my Dickey Farms Georgia Peach T-shirt, a souvenir of visiting that family-owned packing house and farm stand 45 minutes west of Macon in Musella. It’s a great small-town, farm-country experience.  You sit in the shade of their long packing-house veranda eating peach ice cream. 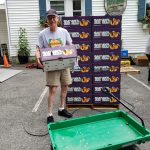 The fascinating work of washing, sorting, and packing happens just over the railing.  There are lots of peach products and souvenirs to take home along with peaches right off the tree.  The Dickey family has been growing peaches here for 120 years and packing fruit in this building since 1936.

While we waited, a Georgia Peach Truck staff member walked down the line explaining how to care for and ripen the peaches. With a double take at my shirt, he shared that this delivery was from Dickey Farms.  What luck!  He snapped a selfie with me to send to the Dickey family down in Musella.

The half bushel box of peaches ($46) held about 25 pounds. “Don’t refrigerate them yet,” we were advised. They’ll ripen in a couple days at room temperature and then keep ripe in the refrigerator for about five more days.  Just take out what you need and hold the rest in a cool place (maybe the basement) to slow their ripening, and make the fruit last. 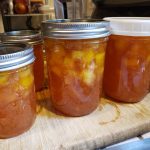 At home, the realization hit me that a half bushel of peaches is a lot. Right away we set some out to ripen for a family-sized cobbler and still more for eating. That didn’t make much of a dent in the box.  As predicted, in a couple days they were ripe and juicy and just kept getting better.

Another batch was brought out to ripen for preserves.  A couple hours of cooking and canning set us up with a dozen half pints of delicious gold in a jar.

Grilled peaches became a flavorful addition to our backyard cooking.  A few minutes on the heat concentrates the peachyness and adds a little char to halved peaches. 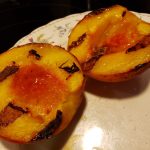 By ripening a dozen at a time, we’ve enjoyed wonderful peaches at breakfast, lunch, and dinner for almost two weeks. Just about long enough to satisfy my craving for tree-ripened summer gold.  The Georgia Peach Truck will be returning to Westport, Darien, and Greenwich on July 30.  Ordering in advance is advised.

Just as our Georgia peach supply is dwindling, the Connecticut peach season is ramping up at Lyman Orchards in Middlefield, CT, an hour’s drive from Norwalk.

I talked to John Lyman, who oversees all the field operations on the farm’s more-than 500 farm acres and nine pick-your-own crops.  He’s a member of the eighth generation of Lymans farming here since 1741.

Forty peach varieties grow at Lyman in a picking season that runs from mid-July well into September.  Clingstones, great for canning, start first. The easy-to-eat freestone types mature in August.  Peak picking season runs from the second week in August through at least Labor day. 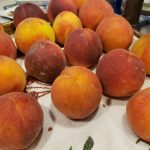 Varieties include both yellow and white peaches as well as nectarines. According to Lyman, the white are more sweet and less acidic while yellows have the full flavor that peach lovers expect. If you don’t want to pick, they’re available in the farm store.

Lyman Orchards is a family-fun socially-distanced destination fully set up for a safe experience.  Pick in the orchards, enjoy a few hours of farm life, and visit the Apple Barrel store for fresh-baked goods, prepared foods, and farm produce. You can even get in a round of golf at one of their three courses.

Lyman was eloquent on the subjects of farming, the weather (any farmer’s favorite topic), and peach lore.  But when I asked him his favorite among the peach varieties, he had to stop and reflect. Finally he named both Ernie’s Choice and Messina, a new cultivar, but you could tell he loved them all. “There’s nothing like a local peach,” he said.  “Tree ripened is the best.”

Next post From The Norwalk Hour: Summer is the Season for Thyme

Previous Article From The Norwalk Hour: Restaurants Go Above and Beyond