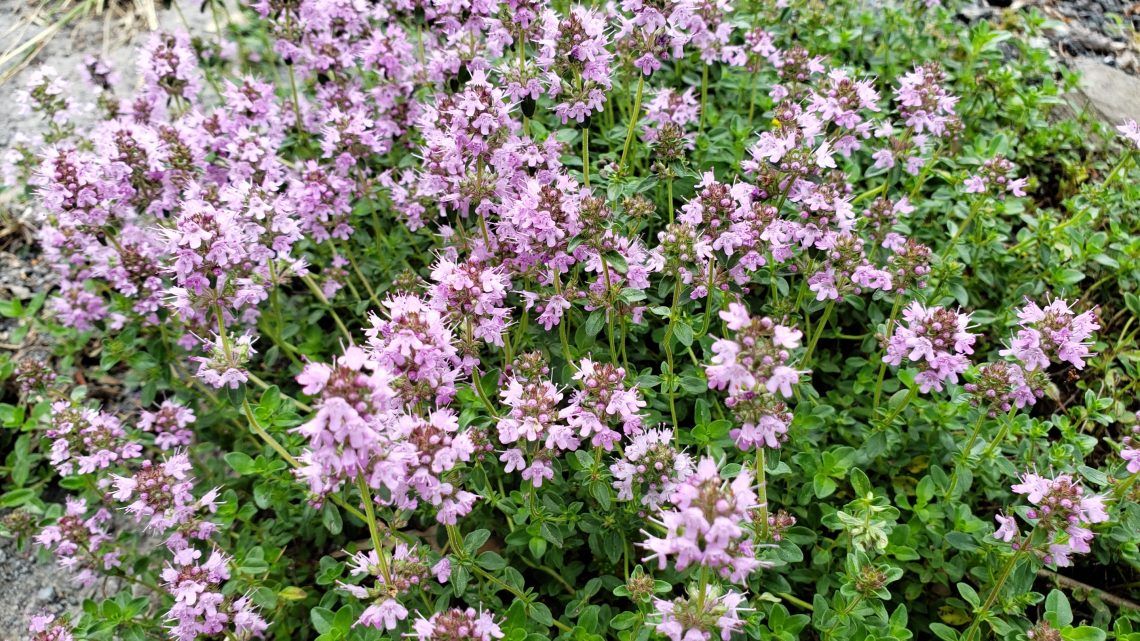 I watched as master chef Jacques Pepin took a handful of fresh thyme, stems and all, and tossed it into his braised veal roast. It’s something I do a lot. For cooks like us (Pepin — efficient, me — lazy) it’s easiest to throw in the bunch and then fish the stems out later. 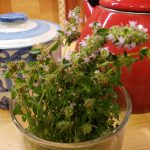 Pepin has a series of short videos on facebook, cooking quick, unfussy dishes from his vast repertoire.  With his charming French accent and masterful technique, he cooks simple, down-to-earth recipes that are as impressive and enticing as they are practical.  You can imagine him and his wife sitting down to a delicious dinner right after the filming wraps up.

Thyme has always figured in his cooking. It’s a floral, fragrant sometimes citrusy herb that has a lot to contribute to all manner of foods.  As Pepin suggested, braised meats benefit from a handful of thyme.  It sometimes appears in popovers, pastry, and even cookies.

I like to put some sprigs on top of fish fillets on their way into the oven.  In the time-honored reference, The Chez Panisse Cafe Cookbook, Alice Waters adds “three branches of thyme” to a slow-simmered oyster stew — a great idea for local Norwalk Island oysters.

Thyme is often paired with lemon and garlic for a classic flavor.  Try this combo with sautéed fish, chicken, or a grilled steak.  A knob of thyme-garlic-lemon butter wakes up any steamed vegetables. 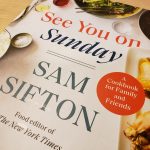 Sam Sifton, food editor of the New York Times, includes two thyme butters for steak in his See You on Sunday, a Cookbook for Family and Friends.  He recommends a quick mashup of butter, shallots, thyme, lemon juice, and vinegar mixed right on the cutting board to be melted over the just-cooked steak. For a pan sauce, add butter to the almost-finished steak in the pan along with some whole sprigs of thyme and cook until the butter is a fragrant nutty brown.

Along with parsley, rosemary and a bay leaf, thyme is included in a traditional bouquet garni — that bundle of herbs that French cooks pitch into a slow-simmering pot of stock, soup, or stew.

Pick off a few leaves and toss them into a green salad or put a generous pinch into a red wine vinaigrette — thyme is welcome in either one.

Thyme can also get in on the dessert course.  Cookbook author Dorrie Greenspan has a recipe in Bon Appetit for Honey-Thyme Ice Cream.  Like Jacques (and me), she simmers the mixture with whole sprigs of thyme and then strains them out. It’s a lot easier than picking the leaves off.

It’s hard to think of anything that won’t benefit from some thyme. 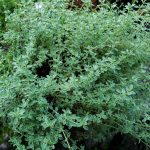 There are lots of varieties, each with their own special thyminess. Gilberties Organics in Westport lists 21 varieties available at their garden center. While some are intended for garden use (imagine a carpet of fragrant thyme in your flower beds) there are plenty for the kitchen.  English, with its mild flavor, more assertive French, and citrusy lemon are cooks’ favorites.   The green leaves bordered in white of variegated thyme varieties add visual interest to gardens and culinary window boxes.

Like so many delicious things, thyme is originally from the Medeterranian.  Popular since Roman times, it was considered a medicinal herb for centuries. A talisman for bravery and strength, it was valued by soldiers headed to battle. In the middle ages it was used to ward off the plague. Victorians recognized its natural antibiotic properties.  Settlers brought it to the new world. More recently its culinary use has superseded medicinal. 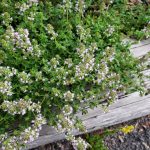 Wild thyme by the side of the road

It’s an easy-to-grow garden or window-box plant.  I have a thriving clump of variegated thyme in my kitchen-door herb box that has survived a couple winters.  It’s output is more than I can use.  Thyme wants a sunny spot and doesn’t need too much water.

In higher elevations it grows wild along the edges of paths and roads. Low-growing with tiny leaves, it’s easy to spot when its lavender colored flowers are standing up above the foliage. Pinch off a few leaves and crush them with your fingers for the classic thyme aroma. I like to collect very fresh wild thyme to use for cooking. 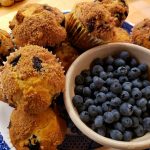 On a recent visit to New York’s Catskill Mountains, both blueberries and wild thyme were plentiful. They made a tasty, seasonal combo in fresh-baked muffins.  The recipe from sallysbakingaddiction.com included some yogurt for a light and moist texture.  The thyme was my innovation.  Topped with cinnamon streusel, they were loaded with blueberries and had just a hint of thyme herbyness.

I’ll spare you the obvious jokes, puns, and groaners and just say: Be sure to make time this summer for some thyme! 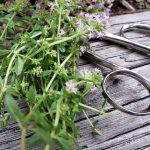 Next post From The Norwalk Hour: Chefs Use Creativity to Transform Food