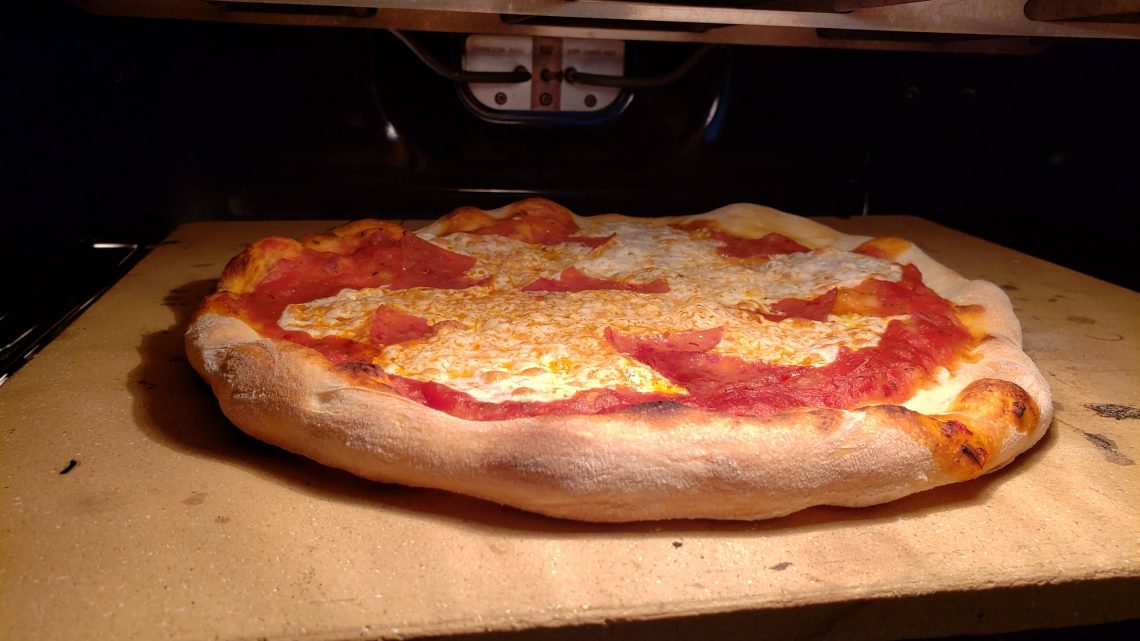 Homemade pizza in the oven 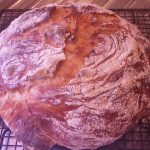 Homemade bread, an elaborate cake, pizza from scratch, or a hearty bean stew, our unexpected time at home is an opportunity for some culinary creativity. Now that Governor Lamont has ordered us to “Stay home, stay safe” a good cooking project will help to pass the time, fill the house with homey aromas, and expand food horizons.

It may be a project to feed the family or just a lark — a savory pot-full that will last for days or a long-standing box to check on your foodie to-do list.

Our son Bertram, out in California, made crackers. I mean, who makes crackers from scratch?  But it was something he always wanted to do and finally had the time and motivation. It turned out to be pretty easy with tasty results.  The crackers were not quite square, but had attractive zig-zag edges as though they’d been cut with pinking shears. I’ll take his wife Johnny’s word that they were crisp and yummy.

I’ve had a couple calls in the last few weeks about baking no-knead bread. The recipe, created by baker Jim Lahey, creative force behind New York’s Sullivan Street Bakery, is a wonder. It’s simple, yet the multiple steps (spread out over almost a day including resting overnight), are perfect for these stay-at-home times. The results are impressive: a dark, crusty bakery-style loaf with an artisanal flavor and texture.  The response is usually, “Wow, you made that?”

Both our neighbor Yvonne and daughter Charlotte gave Lahey’s recipe a try. If you want to try it too, get in touch. I have a great hack to make it even easier. 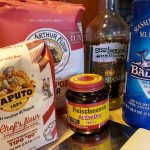 Pizza-making is another bread-based home-cooking project good for these times. I love the sharp, clean aroma of fermenting dough and get a kick out of watching it rise. So for me home pizza-making means a scratch crust.

This time, I tried a recipe, touted for its great flavor, from the famous Roberta’s pizzeria in Brooklyn.  It’s an overnight rise, like Lahey’s bread. I scored some Italian 00 flour at AS Foods on New Canaan Avenue for authenticity, along with a ball of their fresh mozzarella and some quality pepperoni for delicious toppings. Yes, you can get ready-to-use dough, but making it from scratch is the fun part for me. 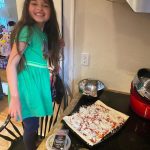 Anneke Scott proud of her pizza

Pizza is a great home-cooking project for kids too. For them, you may want some ready-to-use ingredients, or they can help to stir, shape, grate, and put it all together.  They get that same sense of accomplishment that the grownups do.

Second grader Anneke Scott and her mother Kirsten Wieser Scott of Norwalk have been making pizza at home since school and work routines changed. For a recent batch, being at home allowed time for a scratch crust.  Anneke helps to shape the pie and add the toppings. She prefers just cheese, which she hand grates, but adds some sausage or pepperoni for her Dad. “She’s very proud,” Kirsten told me, “and now we have the time.”

Marsha has been whipping up batches of salted brownies, bran muffins, and Irish soda bread. Baked goods, either sweet or savory, are worthy projects for these times. Just be careful to keep up your exercise program.  Those baked goods can sneak up on your waistline.

A few years ago the term procrastibake came into general use, describing the practice of baking elaborate creations instead of accomplishing what you should or need to do. There’s even a book on the subject — Procrastibaking: 100 Recipes for Getting Nothing Done in the Most Delicious Way Possible by Erin Gardner. 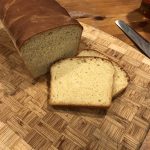 The term has been updated to distractibaking for our current situation.  The New York Times has a list of 23 recipes that will focus your attention while stuck at home and distract you from social distancing angst.  If you’ve ever had the yen for a cooking project like this, now’s the time.

Bertram baked off a loaf of Pain de Mie, a fine-grained sandwich-style bread in the French tradition. Delicious, I’m sure.  A project like this takes more time than is normally available, but is so rewarding to slice and eat. 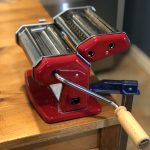 Fresh pasta is another cooking project that seldom hits the top of the list. If you have a pasta machine (we gave ours away years ago), bring it out now! The relatively simple ingredients are probably in-house already. It’s the kind of thing that gives a real sense of accomplishment. Bertram rolled out a batch of fettuccine and tossed it with some home-made pesto for supper.

These days are also great for long-cooking soups, stews, and braises. I got a five pound chunk of pork shoulder the other day and braised it with dried apricots, cardamom, and ginger according to Molly Stevens recipe in All About Braising.  The house smelled great and now there are three meals in the freezer, plus one already consumed.  A New York Finger lakes blend — Herman Weimer Field White — from Ancona’s in Wilton was just the right wine with it. 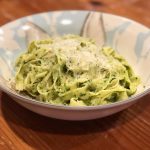 Marsha makes a slow-cooked vegetarian chili that will keep us going for a while. There’s a stash of legumes: lentils, split peas, black beans and a 16 bean soup mix ready for a leisurely simmer in the company of a ham bone.  We’re partial to a Swedish-style yellow pea soup made with peas purchased at the Scandaniavian Butik in Norwalk.

Even while working from home, there can be something simmering on the stove or baking in the oven.  Whatever your cooking itch may be, now’s the time go ahead and scratch it.

Next post From The Norwalk Hour: Send a Social Distance Hug with the Gift of Food