From The Norwalk Hour: Small batch booze is a big deal 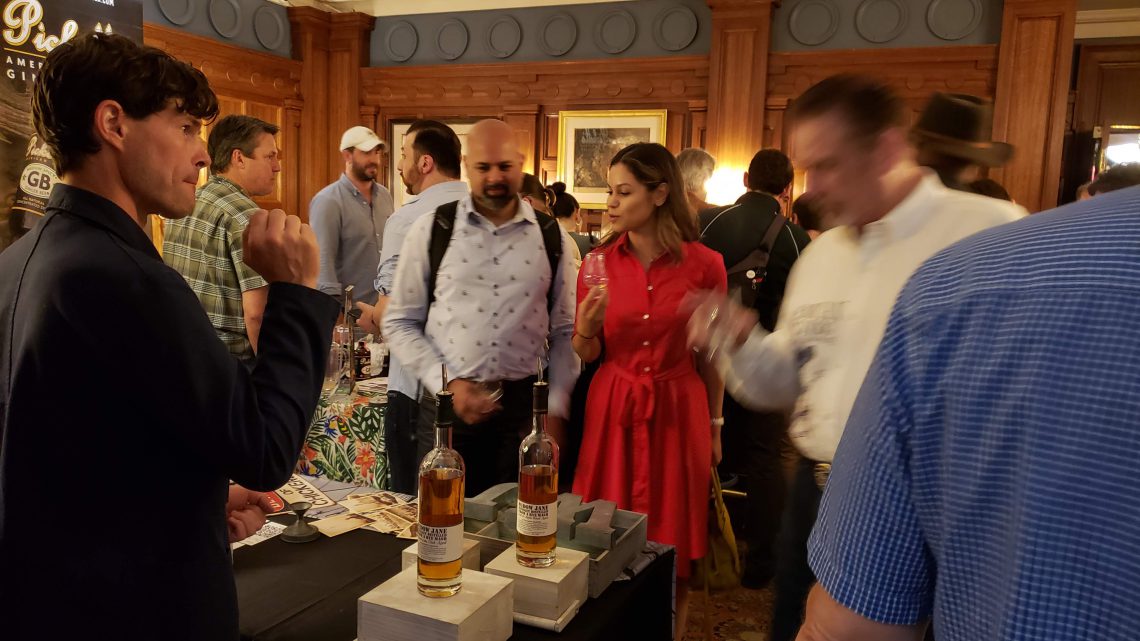 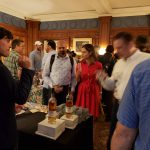 The enthusiastic crowd was gathered to sample some of America’s most interesting and innovative craft spirits.  Small batch booze is a big deal these days. Following in the footsteps of winemakers and brewers, distillers are setting up small operations to make distinctive liquors with local flavors and exceptional quality.

Dozens of distillers had brought their wares to the Independent Spirits Expo at the Penn Club on 44th street in Manhattan.  Whiskey enthusiasts know that this annual event draws top-of-the-line distillers, each with several examples of their products.  It’s a hot ticket.

Spread across two floors of the handsomely wood-paneled club, liquors – mostly American, but some from around the world – were on display. Bourbon, rye, gin, and vodka, as well as whiskies – Scotch, Irish, French, and Mexican – plus a few specialties like vermouth, amaro, and Madeira were all there for the sampling. 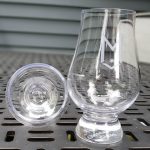 At check-in each taster was given their own souvenir Glencairn tasting glass to take from table to table.  Eager representatives were happy to describe their product, tell how and where it’s made, explain why it’s unique, and pour a splash in your glass.

It’s best to go slow and be a little choosy. There’s no way to taste, appreciate, and remember them all.  Good note-taking is helpful, but often falls by the wayside after the first few tables. The vendors usually have a brochure or card to pick up, which can be a handy reminder.

Just inside the door, we found the Traverse City Whiskey Co., a Michigan distiller from an area famous for music, lakeside leisure, and cherries. They had a fresh, clean tasting rye, a straight bourbon aged two years, and a whisky flavored with cherries, all for around $40. 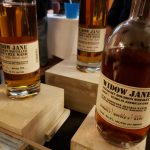 Next up was the Widow Jane Distillery from Red Hook, Brooklyn.  They’re aiming a little higher with bottles hand-numbered for barrel, bottle, and bottling date. The light but complex 10-year-old bourbon retails around $86.  Their oak and apple-wood aged rye ($49 Total Wine) sips like a fine brandy.

Across the aisle Brenne 10-year single malt whisky from France aged in Cognac barrels had dried fruit notes, assertive oak flavors, and a lingering finish – “ more masculine,” according to Marsha.

Three distinct styles, at the first three tables predicted the diversity that was coming as we headed up the elegant, curving, marble staircase to the high-ceilinged main tasting area. 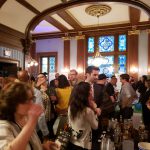 Each vendor was surrounded by an animated crowd, tasting, discussing, and comparing.  Everyone seemed excited about the variety and quality on hand. The tasters were mostly men, youngish – between 30 and 50 I’d say – and casual, but well turned-out, like you would expect in midtown Manhattan.

Faced with a couple dozen more tasting tables, we knew we would have to choose carefully, skip quite a few, and pace ourselves.  Whiskey was the focus, but I’m always ready to try something new.

Claire Marin told us about her Catskill Provisions Rye Whiskey infused with local honey from Long Eddy, NY.  The honey sands down the rough corners of the rye, leaving the whiskey essence while adding a subtle earthy character. 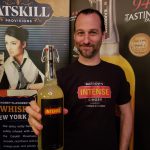 At the same table Josh Morton sampled us on his snappy Barrow’s Intense Ginger liqueur made in Brooklyn.  Its authentic ginger flavor is a great mixer for cocktails. He handed out a card with 40 cocktail ideas from the Bee’s Knees to Whiskey Sour that all looked delicious.

Berkshire Mountain Distillers in Sheffield, MA is well know for their excellent whiskeys. It’s less than two hours up Rt-7, just over the Mass line. Drive up, have a nice lunch, and bring home a bottle of their excellent Smoke and Peat along with an award winning gin.  Visiting and tasting is part of the craft liquor fun.

Closer to home, taste at the Asylum Distillery in Bridgeport or Widow Jane in Brooklyn. While you’re there, check out Duke’s Liquor Box in Greenport, NY a retailer specializing in small-production products from around the world.

By the way, both WHISKEY and WHISKY are correct spellings. Whiskey is generally associated with American bourbon while whisky is how it’s spelled in Scotland. Distilleries around the world adopt the spelling that favors their style.   However you spell it, next time you’re in the store, look for a bottle from a small, local distiller and give it a try. I think you’ll be pleasantly surprised.

Next post From The Norwalk Hour: Seafood restaurants - old and new

Previous Article From The Norwalk Hour: Cherries are making their annual appearance

From The Norwalk Hour: Prosecco, perfect for summer

From The Norwalk Hour: Head to a restaurant with a good whiskey bar