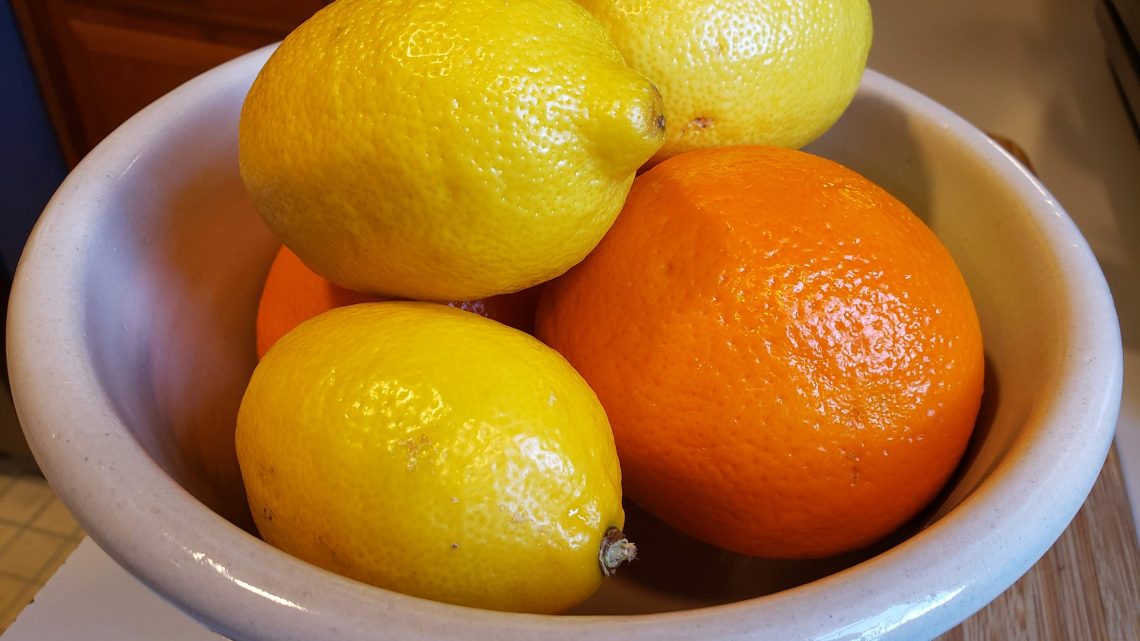 Oleo-saccharum.  No, it’s not a margarine with a fancy Latin name.  It’s not a symptom of a bad back either. It’s an easy-to-make citrus extraction that will brighten up drinks: cocktails, mocktails and even lemonade.

Our neighbor, Jean, came across it years ago and has been making locally famous Cosmos ever since. She invited me over one morning to see what’s involved. “It is a pretty short process to start,” she explained.

Digging in, I learned that oleo means fat and saccharum means sugar – sugared oil, if you will.  It’s citrus oil in the skin of the fruit muddled with sugar that makes the magic. 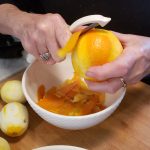 Did you ever see the bartender’s trick of bending a lemon peel in front of a lit match? Sparks fly out seemingly from nowhere.  It’s the citrus oil from the peel putting on a show by burning as it passes through the flame. That flavorful oil blends with the sugar to make oleo-saccharum.

Like all good cooks, Jean works from experience rather than from a strict recipe. Five lemons and two oranges were quickly peeled.  A peeler yields nice thin slices without any of the bitter white pith just below.

“I use about two ounces (volume measure) for each piece of fruit,” she explained. Measuring the sugar out in a cup she told me that she goes a little light, so the syrup won’t be too sweet. 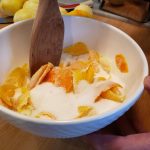 Give the peel-sugar mix a good bashing with a muddler or wooden spoon to release the oil, and let it sit for three to six hours (or even overnight) at room temperature. Strain it off the peels.  The resulting liquid is oleo-saccharum.

Jean added a couple more steps to make a citrusy syrup, knowing that this batch would end up in her famous Cosmos.  She squeezed the peeled fruit and added the juice, seeds and all, to the bowl.  After it has marinated, she’ll pour in an equal amount of boiling water and let it steep a while longer. Strain the mix and get out the cocktail shaker.

Oleo-saccharum or Jean’s Cosmo mix will keep in the refrigerator until needed. 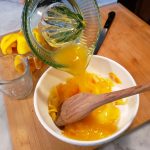 Oleo-saccharum can be used in any citrusy cocktail that calls for simple syrup.  It will compliment the fruit and lend intensity to a Margarita.  Use it in a sour with bourbon, rye or scotch, in a cooling rum punch or in a refreshing Collins.

On seriouseats.com drinks expert Michael Dietsch extols the virtues of oleo-saccharum in non-alcoholic drinks.  He also simmers it into a syrup that is a base for lemonade.  It’s good, too, as a sweetener for iced tea, to dress up a vinaigrette or to pour over ice cream.

Fruit syrups are always handy behind the bar. At this time of year rhubarb simmers up into a seasonal spring syrup.  Ryan Andrade, head bartender at the posh White Hart Inn in Salisbury, CT, makes a rhubarb-rosemary base for his springy Fleeting Remembrance cocktail.  Two or three cut up rhubarb stalks are simmered in enough simple syrup to cover.  Turn off the heat and steep with a sprig of rosemary for about 30 minutes. Strain and refrigerate.

For the Spring Remembrance, Andrade gives gin, the syrup, fresh lime juice, bitters and egg white a dry shake to blend and then shakes again with ice to chill. Lemonade-pink, the drink is served in a tall glass over ice.   A lime peel squeeze finishes the drink with a burst of oil.

I’ll bet Andrade’s syrup would be good in Jean’s Cosmos.

I told Andrade that my oleo-saccharum wasn’t producing much liquid. “It doesn’t,” he said and recommended simmering the drained peels with some water to make a citrus-flavored simple syrup.  “It would be good in a French 75, White Negroni, or a Muddled Old Fashioned,” he suggested.

Fruit syrups like oleo-saccharum or Andrade’s rhubarb bring fresh, sometimes seasonal, flavors around the kitchen to drinks and more. They’re great to have on hand, keep well, but don’t seem to last long.

Next post From Sunday Art and Style: Parker House Rolls and much more in Boston