From The Norwalk Hour: Fresh and classy Australian food at Flinders Lane 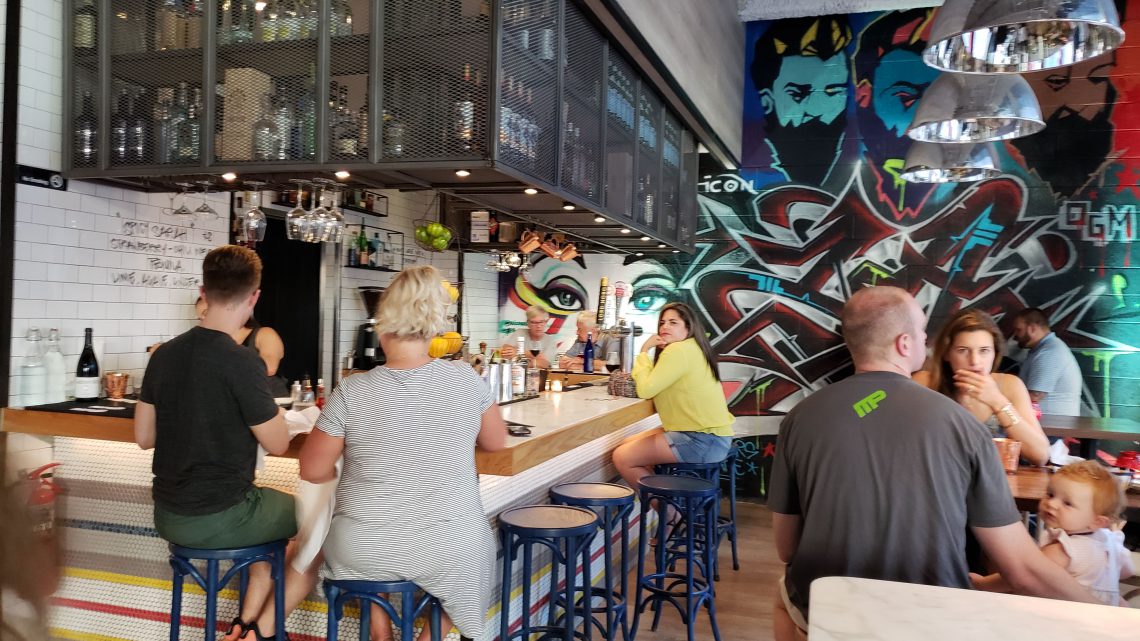 Kangaroo loin, shrimp on the barbie, sausage rolls, and Fosters beer-battered fish and chips – it was clear this wasn’t an American menu. 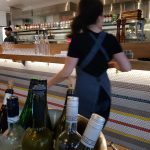 A quick scan of the offerings at Flinders Lane, a stylish new restaurant on Summer Street in Stamford, reveals Australian roots. If that isn’t enough, the charming down-under accent of managing partner Chris McPherson seals the deal.

This is no fusty faux British-empire pub, though.  In the fresh and classy modern space bands of colorful tiles contrast with dark wood tables, and the chefs put on a show in the open kitchen.  Seating is on comfortable upholstered sofas and bentwood chairs. Eclectic details like the neon rope skipper on the wall and the graffiti-style mural by the bar, hint at the broad scope of the dining experience. 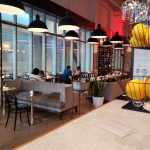 Australia, like the U.S., is an immigrant nation. The British, Greeks, and Italians all left their mark on the nations food.  It’s also an island nation, so there’s plenty of seafood. Lamb from the extensive grasslands is the favored meat, and the pacific rim influences from just over the horizon pop up everywhere.  The mashup of cultures makes for some pretty great eating.

Fish and chips, lamb chops, and the grilled kangaroo loin along with the de-reguer burger, roast chicken, and strip steak are a sampling of the tempting mains.

There are lots of world cuisines that we don’t hear much about. Places like Germany, the Scandinavian countries, eastern Europe and the entire continent of Africa fly below the radar.  In our area the cooking of France, Italy, and Spain is well explored as are the foods from South America, India, and Asia. I never thought about Australian food until now, but like almost everywhere else, there’s a rich culinary world here to explore.

I’m embarrassed to say that our interest in Australian food was piqued by a costume drama (soap opera) cataloging the deeds and misdeeds of a large family living on their sheep station. We’re now in season five on Amazon of A Place to Call Home.  As our food came, we discussed the latest travails of the troubled and troublesome Bligh family and imagined ourselves eating like them. 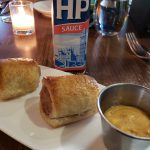 A crisp, refreshing golden-hued Coopers pale ale, from Australia’s largest brewery, got us off to a good start.

Well-seasoned sausage rolls, like jumbo pigs in a blanket, were wrapped in a golden brown pastry crust.  They came with sambal (a chili pepper paste popular in Malaysia) mayonnaise that had some heat along with a bottle of classic HP Sauce – a vinegary concoction described on the label as England’s favorite brown sauce. I’m told they’re an Aussie menu staple.

Marsha’s colorful house salad including celery, radish, and apple was lightly dressed with an orange vinaigrette and sported cheerful pink and blue edible flowers on top. 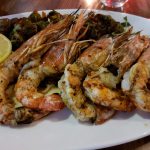 Wild-caught shrimps on the barbie were well-marked from the hot grill and gently seasoned to let the shrimp flavor shine through. Lined up on the plate shoulder to shoulder with their heads attached, they came with a side of delightful roasted Brussels sprouts sweetened with truffle-honey dressing.

I had to try the braised lamb tagliatelle, since lamb is perhaps the best known Aussie food export.  Generous shreds of meltingly-tender assertively-spiced lamb were tangled with the pasta and sweet cherry tomatoes. 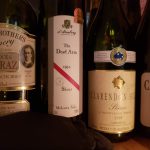 There was a good selection of Australian wines along with an interesting cocktail menu, but I stuck with the food-friendly Coopers Ale.

Pavlova caught my eye on the dessert menu. It’s a dessert with French-Russian origins, but, I assume, popular down under.  The meringue shell, crisp on the outside and fluffy within, was shaped a little like a volcano, the crater filled with vanilla cream, and topped with fresh berries. Looking more like a dessert for two, it’s sugary decadence was surprisingly light and offset by the puddle of tart passion fruit sauce on the plate. 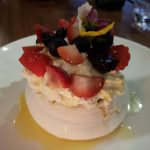 While we were eating, Marsha and I talked about taking a trip to Australia. After checking the 22 hour flying time, we decided it would be easier to visit Flinders Lane whenever we get the yen to travel down under

Next post From The Norwalk Hour: Generations of fine tea from Harney and Sons

Previous Article From The Norwalk Hour: When the world gives you lemons - it must be summer

From The Norwalk Hour: American Bounty on the Hudson at the Culinary Institute of America