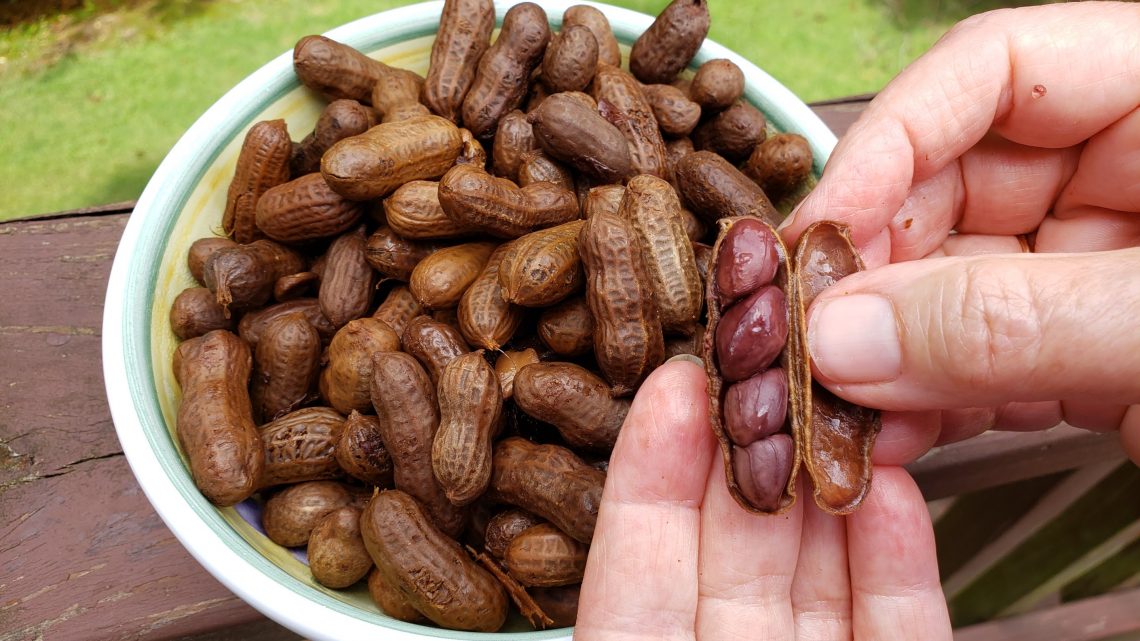 When I think of eating in Georgia some mouthwatering flavors come to mind. Just like pizza in New Haven, lobsters in Maine, and clam chowdah in Boston, Georgia has its food pride. Peaches, of course, are at the top of the list, and we all know about fried green tomatoes thanks to the movie.

They eat well in the Peach state.  There’s fried chicken and crispy pork chops too.  Pimento cheese, braised collards, and butter beans, plenty of biscuits and cornbread, all washed down with icy pitchers of sweet tea. 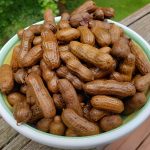 When my friend Gregg heard I was in his hometown of Macon, he emailed me: “Boiled peanuts & pulled pork all good?  I need some!”  Central Georgia pulled pork is excellent and the famous Fresh Air Barbecue is our go-to.  But I was pretty sure I’d never had a boiled peanut.

It turns out that boiled peanuts, sometimes called country caviar, are a much-loved specialty here — a staple of backyard gatherings, social hours, and snacking.  Some people can’t resist.  Others just eat a few.  But no-one can turn them down.  They’re ingrained in Georgia culture but haven’t travelled much beyond its borders.  Georgians have kept boiled peanuts to themselves.

Boiled with plenty of salt, they can be made at home or bought at roadside stands.  Shucked by hand and eaten warm, they’re a little messy, just like lobster or steamed clams.   The nuts are soft but not mushy with a balance of salt and peanut flavor that makes them irresistible. 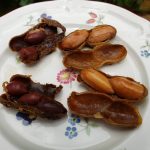 Boiled peanuts, green on the right, dry on the left

Our friend, Sandra, makes boiled peanuts every year in the late summer when green peanuts are harvested.   Her large soup pot is filled three quarters full of the nuts (about five pounds) in their shells and covered with water.  Plenty of salt is important, “About a third of a box,” she said.  Boil uncovered for about a half hour, adding more hot water as needed to keep the nuts covered.

As they cook, more salt can be added. This is subjective and personal, based on experience, and preference. Everybody’s recipe is a little different.   Turn off the heat and let the nuts sit in the water to cool. The longer they rest, the saltier they’ll be.

The nuts will keep in the refrigerator for almost a week or in the freezer till the next harvest.   Always served warm, a quick zap in the microwave warms them right up.

Spice mixes like Old Bay or one of Paul Prudhommme’s New Orleans-style Magic Seasoning Blends can be added during cooking for some zing.  It is said that peanuts were originally boiled on the beach in salty seawater. 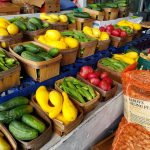 At the Macon State Farmers Market raw peanuts are a standard offering. Five pound sacks of peanuts hang high over the tables of local okra, sweet potatoes, squash, and cucumbers.  Twenty-five and fifty pound bags are stacked next to the refrigerator filled with pouches of shelled butter beans.

At the Cameron’s Farm stand, a one-bushel bag of Hardy’s fresh green peanuts from Hawkinsville, about an hour south of Macon, is open — ready for home boilers to scoop out what they want.  The recipe for boiling is printed on the bag.

Across the way at Michelle’s, there’s a pot of peanuts boiling in the back of the booth. “They cook all day,” we were told.  Peanuts are ladled out of the pot by the quart ($3), half gallon ($5), or more.  I asked for a quart  but was told, “That amount is just a tease. They’re mostly shell, after all.”  It was good advice. 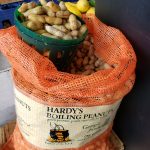 Green peanuts boil for about an hour and a half according to the instructions on the Hardy’s bag.  Dry peanuts, available the rest of the year, boil for much longer.  Boiled peanuts right out of the pot are a year round delicacy.

Hardy Farms is a major supplier of green peanuts for boiling.  They have a roadside stand in Gray, GA that is open for the three-month season.  Marsha’s cousin Brooks told us it’s a popular stop on the way to Athens for a University of Georgia tailgate.  Hardy will ship boiled peanuts overnight in season or roasted nuts year round. 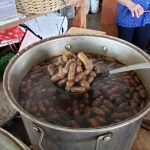 Boiled peanuts cry out for some cold beer or iced tea — something to wash down all that salt.  Sipping drinks like wine or cocktails just don’t do the job.  They’re an ideal snack for a picnic, tailgate, or backyard gathering. Scattered boiled peanut shells are one of the hallmarks of an authentic Georgia celebration.  Look for them any time you hear a slow drawl and a friendly y’all. 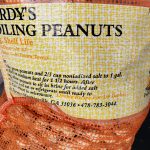 Next post From The Norwalk Hour: A Message in a (Wine) Bottle

Previous Article From The Norwalk Hour: Why is Steakhouse Beef Better?

From The Norwalk Hour: Eating runs the gamut on road trips

From The Norwalk Hour: Tasting and Touring along the Finger Lakes