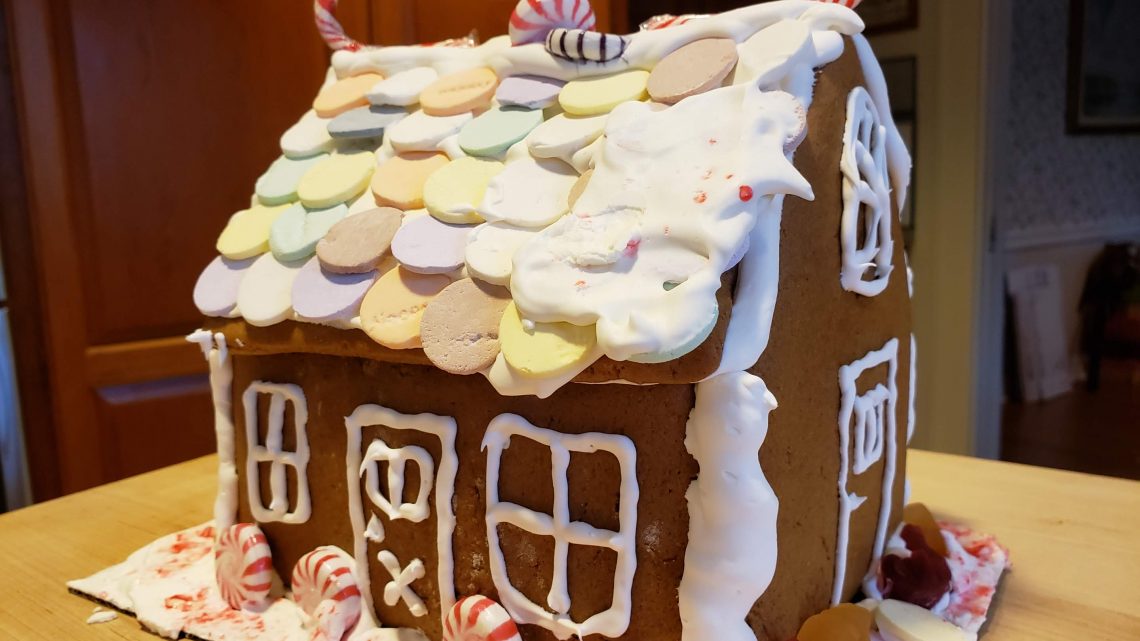 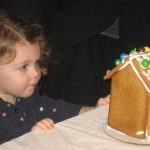 I never saw any child who could resist a gingerbread house. They stop and study. The younger ones like to touch. The older ones want to know how it’s made. But between those ages, the sweet spot of gingerbread house connoisseurs, they just stand in wonder.

Gingerbread houses are magical Christmas creations of flour, butter, and sugar, but they seem endangered. Restaurants, hotels, and bakeries used to make them to enchant customers and passers by.  A fancy gingerbread house was good PR.  But this year, I couldn’t find any display of this baker’s art on public view.

No doubt, the pandemic has focused the attention of bakers and chefs on more pressing concerns. I don’t blame them for skipping a showpiece gingerbread house.  This year they haven’t got the time, energy, or resources for such frivolity. 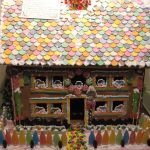 A gingerbread house at The Silvermine Tavern

Happily, it seems there’s a growing trend toward making gingerbread houses at home. Pandemic-bound families are looking for a creative activity just like this. You can build from a kit or go from scratch. There are plenty of on-line resources to help.

Gingerbread houses are reported to date from the early 1800s after the publication and popularity of Grimm’s fairy tale, “Hansel and Gretel.” Bakers in Germany began to fashion houses of crisp gingerbread decorated with candy like the one in the story.  German immigrants brought the tradition with them to America.

My first experience with a large scale gingerbread house was at the now-closed Silvermine Tavern, where German baker Lothar Bachenheimer made a display house beginning in the 1970s. Every year, right after Thanksgiving, he began mixing and baking fragrant gingerbread and accumulating candies for a unique design. Over the years, artist Kat  McHone took over the decoration.  Year after year, each year’s table-sized house enchanted children of all ages. 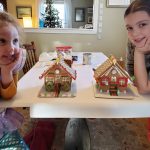 Paige and Moira with their decorated houses from Forever Sweet

This year I got the itch to make one myself.  Actually it was the hope of decorating it with my granddaughters Moira and Paige that got me interested. (Grandson Rhys is still too young.)  I thought I’d bake the sheets of gingerbread, cut out the walls and roof, then glue the structure together with icing — ready to decorate.  That’s pretty much what happened, but with social distancing, we only had one chance to get together and stick on the candies.

I was tempted by gingerbread house kits. At Michaels I saw them stacked up by the checkout:  Branded Oreo houses or more traditional-looking store brands.  The Christmas shop at Stew Leonard’s had a big display too.

At the Forever Sweet Bakery on Main Avenue, they offer assembled kits ready for decoration ($27).  Marsha got one for both Paige and Moira to decorate at home. 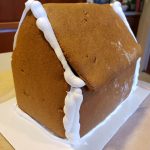 Seeking the satisfaction of a scratch-baked house, I passed on the kits. Instead I turned to SallysBakingAddiction.com for a detailed plan. It included recipes for the gingerbread, cut out templates for the walls and roof of the house, and extensive instructions along with a video on how to get it done.  I skipped her recipes for icings, using a more old-school formula for royal icing made with egg whites and cream of tartar.

There’s no substitute for experience, but for a first effort the results were OK.  I must have rolled the walls too thick because I had to sacrifice the chimney parts to have enough dough for the last roof section. Despite my devotion to the instructions and careful cutting, some of the parts had wavy rather than straight edges.

Nonetheless, with generous applications of icing to fill the gaps, the house came together. While its four walls hardened overnight it looked like a ruin on the Scottish moors — a dark roofless, seemingly abandoned crofter’s cottage. 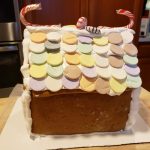 With the roof on and the icing hardened it was time to decorate.

There didn’t seem to be any gum drops in the stores I visited. Are these necessary house decorations endangered?  On the other hand, I was pleased to find Necco wafers up on a high shelf at the Stop and Shop. The best candy for roof shingles, they had been out of production for a while.  Swirly pinwheel candies, gummy bears, and candy canes, of course, rounded out my decorating options.

With only a short time to decorate with the girls, I piped on windows and doors and “shingled” one side of the roof — just to give them the idea. 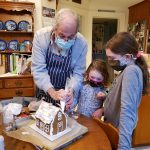 Decorating with Paige and Moira

With great delight they both glued Neccos to the roof and candy around the sides. Moira suggested that crushed candy canes would make pink (her favorite color) snow all around the house.

The kids (and I) were delighted with our house and happy to have their own too.  There’s no substitute for Christmas magic and wonder made with your own hands!

Next post From The Norwalk Hour: Local Bakeries offer Christmas Traditions from Around the World

Previous Article From The Norwalk Hour: Gift Ideas for Cooks and Foodies