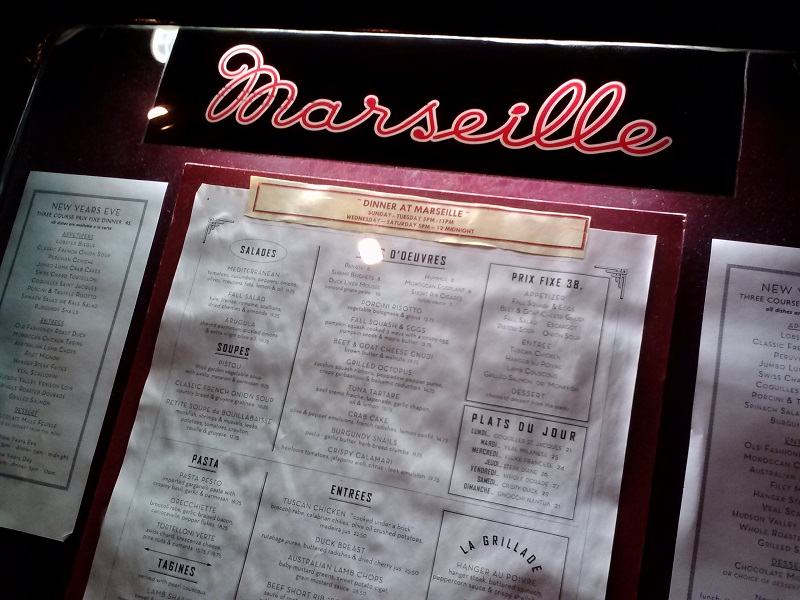 At this time of year, the media is full of “best” lists: 10 best movies, 100 best books, dozen best travel destinations, 20 best music recordings (lists for each style) and, of course, best restaurants.

Pete Wells, restaurant critic of the New York Times, wrote about his picks for the 10 Best New Restaurants in New York to wind up his year of reviewing. Not the highest rated restaurants of the year, these were the most memorable, distinctive, fresh and innovative, restaurants that made him want to return, even though he can eat anywhere he chooses.

Unexpectedly, his list was dominated by French restaurants: #1 Batard, based in French cuisine but drawing from all over Europe; #3 The Simone, elegant, timeless French; #4 Cherche Midi, bistro French; and #8 Dirty French, classic French injected with “non-French spices and flavors”. Four out of ten on the list featuring France is remarkable, just as remarkable as the absence of any Italian restaurants.

It looks like the restaurant pendulum is swinging back from the Italian juggernaut toward the cooking of France, the mothership of sophisticated cuisine. Not too long ago, we were repudiating French cooking and labeling our favorite potatoes “Freedom Fries”. I’m glad to see the cuisine of France returning to respectability and its rightful place in our dining options. For unforgettable flavors, prime ingredients, superb technique, and silken sauces, you can’t beat French cooking.

Locally, almost every town has a French restaurant squeezed in among the many other ethnic options. These are not necessarily the traditional mom and pop operations with Madam overseeing the diningroom and Monsieur at the stove, as epitomized by the Soltners at New York’s renowned Lutèce. Instead, young chefs enamored with the heritage of French cooking, but not afraid to update it with influences from around the world, are bringing this great cuisine back to us. 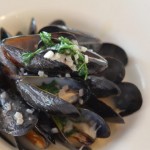 Mussels at Bistro B

For a casual but very French experience, head to Meli-Melo Crêperie and Juice Bar on Greenwich Ave. The long list of authentic crêpes, baguette sandwiches and Croque Monsieur or Madame will have you humming the Marseillaise. At the other end of the county, the popular Bistro B in Bridgeport serves up bistro favorites like mussels, onion soup, escargot, sole meuniere, duck confit and steak frites with American fare including burgers, fried chicken, and mac & cheese added to the mix.

Boulevard 18, centrally located in New Canaan, covers a host of the French classics on its bistro menu: truffled fries, marinated olives, gougères, a whole section of “Charcuterie & Fromage”, frisée salad, and Salad Niçoise along with the obligatory mussels and steak frites.

Chef Eric Sierra presides in the kitchen at the Rive Bistro overlooking the Saugatuck River in Westport. French 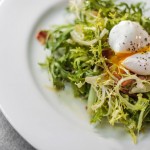 cooking and a water view: it doesn’t get much better. The brief menu is packed with French treats like: sabodet (with green lentils, smoked bacon, duck and armagnac sausage, and saba vinegar), coquille St Jacques, and cassoulet, in addition to the bistro standards.

Bernard’s in Ridgefield is a step up in classic French style with white-tablecloth ambiance and high-end ingredients. It’s perfect for a special occasion or try Sarah’s wine bar, upstairs, for live music and a less ambitious but equally delicious menu. Bernard’s was chosen as the Best Restaurant statewide in Connecticut Magazine’s 2014 Readers Choice voting. Need I say more!

For French food on-the-go, Debra Ponzak’s Aux Délices stores are the place to stop. Ponzak earned her three-star rating as the chef of the legendary Montrachet in New York. She now offers delicious food to take home along with yummy baked goods all with a French accent. With stores in Darien, Greenwich, Riverside and Westport, it’s easy to get some of her goodies for dinner at home. Visit http://www.auxdelicesfoods.com to be tempted by the menus. Debra also offers cooking classes in the commercial kitchen. 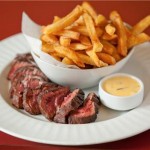 We like to have a holiday dinner in New York every year. This year it was at Marseille at the corner of 44th and 9th (on the cusp of the theater district and Hell’s Kitchen) as part of an evening stroll to see the lights and visit the Rockefeller center tree. France, like most Euro countries, has regional cuisines as a subset of their best known national dishes. Marseille emphasizes the cooking along the mediterranean coast – lots of seafood (bouillabaisse, of course), pistou soup, and slow-cooked tagines. The arched ceiling, glowing colors, bright flowers and patterned tiles assure you that it’s warm and sunny in the south of France, even on a blustery December day in New York.

Choosing from the long menu wasn’t easy, but we managed: mussels marinière with frites for Marsha and, for me, lamb tagine with merguez (north African sausage), golden raisins, and pine nuts all in a savory, sweet and spicy onion sauce next to a spoon full of exotic pearl couscous – a mouthful of flavors. An arugula salad and fall squash prepared three ways started our dinner along with a glass each of Viognier and cru Beaujolais from Fleurie. We finished up with a caramel mousse to share, espresso and cappuccino. Bustling with tourists and pre-theater diners, Marseille gave us a satisfying and agreeable meal, competent service and an evening of holiday excitement in New York.

French cooking never left us, but it seems to be on the rise. If you haven’t had a good, authentic bistro meal lately, give it a try. I’m sure it will make your top 10.