From The Hour: Sweet Summer Succotash 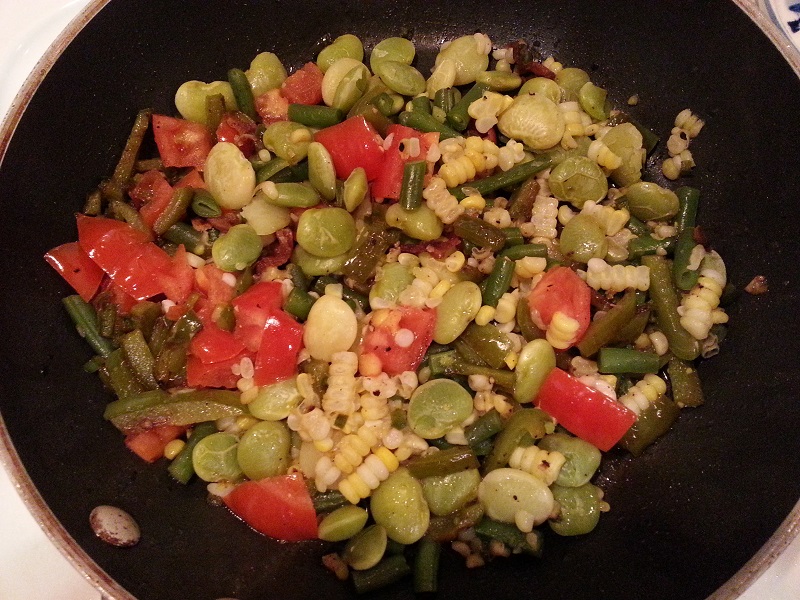 We’re at the height of the sweet corn season. It’s pouring in, fresh from the fields to the farmers markets, stores and farm stands. At one stand I frequent, the tractor pulls up morning and afternoon with burlap sacks of ears fresh from the field right across the street.

There is a profusion of varieties, each with their partisans – yellow, white, and a mix of the two – with names like Kandy Korn, Sugar Pearl, Peaches and Cream, and the ever popular Butter and Sugar. When buying, it’s a common practice to peel back some husk to look at the color, judge freshness and maturity and make sure the rows are full of kernels. Some stores even provide a barrel for the husks in case you want to clean the corn right there.

As a child, I was told by my uncle that there were always an even number of kernel rows. If you eat them two at time along the cob, you’ll always come out with no rows left over. If you eat four at a time (a more practical number) you’ll either come out even or with a set of two rows at the end. So far this has proven to be true. Some folks eat around the cob instead of along the rows – so this folk wisdom doesn’t matter to them. Whatever your method, lots of butter (roll or spread?) and salt are universal.

Corn is generally boiled or grilled. There’s a wide range of opinion about how long to boil the corn. A quick search on the internet found a range of 3 to 10 minutes – boil the salted water first, put the husked corn in and start timing after the water returns to a boil. We do 12 minutes. Corn is also great on the grill where it gets a little smoky char. Grilling in the water-soaked husk is one way (but I can’t see peeling those hot husks) while others put the husked corn right on the grill. I like to start by wrapping it in foil with some butter and salt and then finish it off directly on the grill to get some color.

After a few feasts of corn on the cob, we begin to look for some other ways to enjoy sweet corn. Corn bread with fresh kernels, corn relishes, sweet corn fritters, corn soup, and corn pudding are all popular. But my wife’s eyes light up when I mention Succotash.

Succotash has been an American staple since colonial times. The name likely derives from an Algonquin Indian word. The traditional ingredients are corn cut from the cob and lima beans, although other shell beans can be used. I imagine that its origin is based on both of these vegetables being readily available pantry staples, dried or canned, in most kitchens. It was a traditional dish on the New England Thanksgiving table.

We’re lucky to have a long sweet corn season and farm fresh shell beans of many types as the basis for a modern and tasty succotash. My local farmer tells me he won’t have any limas this season, but cranberry beans will be starting this week and will do just fine – maybe better. (You can always use frozen limas in a pinch.)

Beyond the customary corn and beans, almost anything goes. I like to see some red and green peppers for color, diced tomato is always welcome, while garlic, onion or celery add depth of flavor. Thyme, basil or any other salad herbs make a nice addition. Some people like okra, pimento or zucchini. My recipe starts by cooking a couple strips of bacon, using the bacon fat to sauté the vegetables and then adding the crumbled bacon back at the end – vegetarians beware!

These days the corn, beans and other vegetables can all be farm fresh. Start by sautéing peppers, onions and the like, then add the vegetables that will steam, and cover the pan. There should be enough liquid to steam, but you may need to add a little water or broth.

Succotash is also a great vehicle for using up leftover vegetables. Being a lazy cook, I like to prepare more that I need and then get another dish or meal from the leftovers. Extra corn is the foundation here. I recently made a batch with some cooked corn cut off the cob, frozen limas, green pepper, and jalapeño with leftover green beans, broccoli, and a diced half tomato from lunch. Seasoned with garlic and based on the bacon, it was a tasty mix of summer flavors. Although I had strayed pretty far from the Succotash my wife’s grandmother made, it was a big hit.

Next post From The Hour: Eating Well at Main & Wall

From The Norwalk Hour: A rainy summer for farmers and markets

From The Hour: The BLT, an August Classic