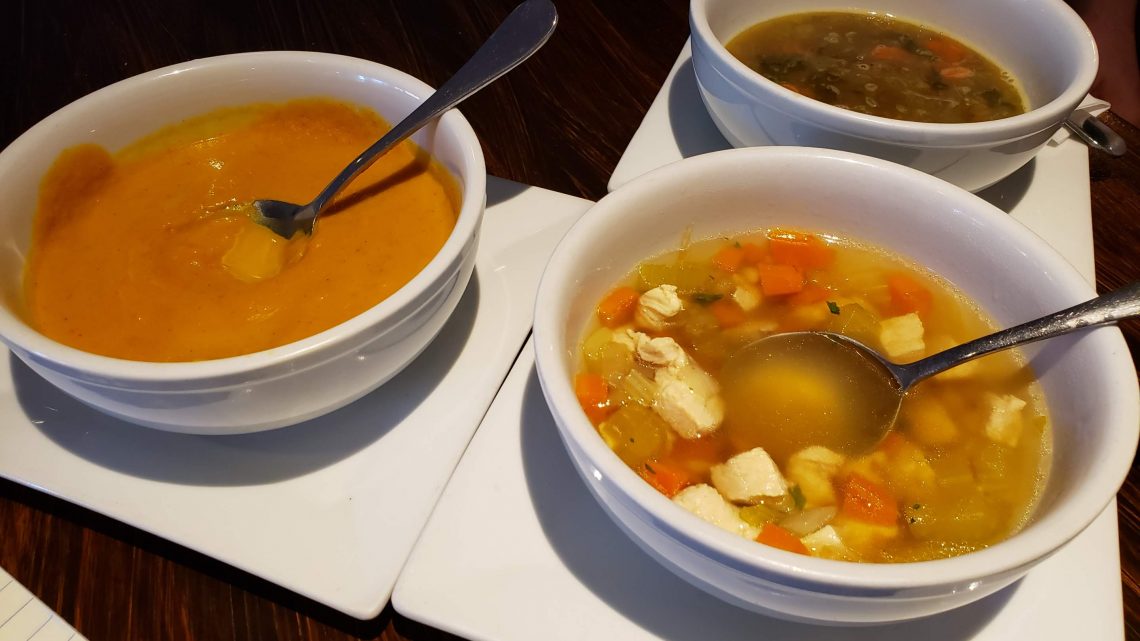 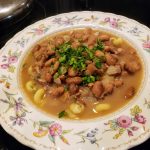 When the October temperature finally went below 50 degrees, my wife Marsha grabbed a bag of cranberry beans that had been languishing in the cupboard over the summer and set them to soak. The next day, with the help of carrots, celery and a smoked ham hock from Ox Hollow Farm in Roxbury, CT she set it all to simmer. Soup season had arrived.

When the weather chills, we seem to crave hearty, slow-simmered soup, not just at home, but at restaurants too.  Fall soups can be ingredient driven (Butternut squash anyone?) or just rib-sticking fare to power through the change of season.

Soups, both plain and fancy, are a mainstay at casual lunch spots and cafés.  At Gruel Britannia in Fairfield, chef/owner Karen Hubrich simmers up fall soups: carrot-apple butternut squash; lentil with 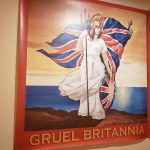 Portobello and spinach; the  British Empire favorite mulligatawny; and the evocatively-named luxury mushroom with brie and truffle oil.

The Dilly Duck Shop on the Norwalk-Wilton Border has a hearty year-round tomato cheddar bisque. This fall the New England-inspired kitchen will turn to kabocha squash, broccoli, and golden lentil for seasonal soups finished with their signature splash of olive oil and handful of arugula.

The neighborhood Silvermine Market in New Canaan was recognized early-on for its flavorful soups by reviewer Patrica Brooks. Chef/owner Scott Kaluczky cooks up pumpkin soup two ways — either lightly seasoned allowing the flavorful squash to shine through, or with the apples and pie spices so popular these days. His vegetable-lentil is hearty and the rich chicken with orzo is rumored to heal the sick. 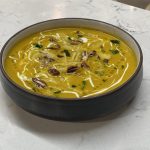 At Kneads Bakery Cafe in Saugatuck, Chef Daniel Moreno is turning out some fascinating soup flavor combinations including: roasted garlic and kale with Nodine’s bacon, 24 month aged Parmigiano and crispy kale; heirloom squash with pecans, crème fraîche, apples and crispy sage; and chestnut apple with pickled pears, brown butter and maple crème fraîche.  Makes me want to drop everything and run over.

You can bet that the team of chef Caitlin McGowan and owner Bill Taibe will be turning out some kicking soups this fall at the Art Space Cafe in Norwalk. We’ve already seen roasted carrot soup with coconut yogurt, and the season is just getting underway. 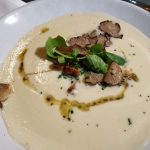 Old-school fine-dining restaurants used to feature a “soup du jour,” usually paired with cheese-crusted French onion soup or lobster bisque. You don’t see that much, but many of the best local restaurants get the stock pot going for creative seasonal soups at this time of year.

Chef Ben Freemole at the Tavern at Graybarns in Silvermine takes pedestrian cauliflower soup and lifts it to the penthouse with winter truffle relish and a generous handful of shaved truffles.   With caldo gallego (Galician broth) chef/owner Renato Donzelli of Westport’s Basso Restaurant and Wine Bar delves into his Spanish heritage for a soup of jamon Iberico, Spanish chorizo, chickpeas and vegetables served with a slice of grilled ciabatta. “Best thing to have on a cold day!” he advises. 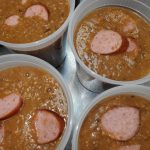 Carrot Top Kitchens, an area farmers market mainstay, has a loyal following for soups. As the season moves away from gazpacho (theirs is legendary) they’ll pivot to heartier fare. I’m drawn to their bourbon split-pea and 16 bean with cider-braised smoked kielbasa.  Weekly offerings will vary. As the market season winds down, you can pick up at their Black Rock kitchen in Bridgeport as well as in Redding.

Marsha’s soup was warming and delicious with a handful of pasta and the shredded ham from the hock tossed in.  There’s more tucked away in the freezer for another chilly day.  Her repertoire also includes cauliflower potage and Swedish yellow pea soup among others. After a holiday turkey, there’s usually a batch of wild rice and mushroom soup made with stock from the bones.

Homemade or chef prepared, this is the season to savor a satisfying bowl.

Next post From Sunday Arts and Style: Locally-roasted single-origin coffee: an affordable indulgence