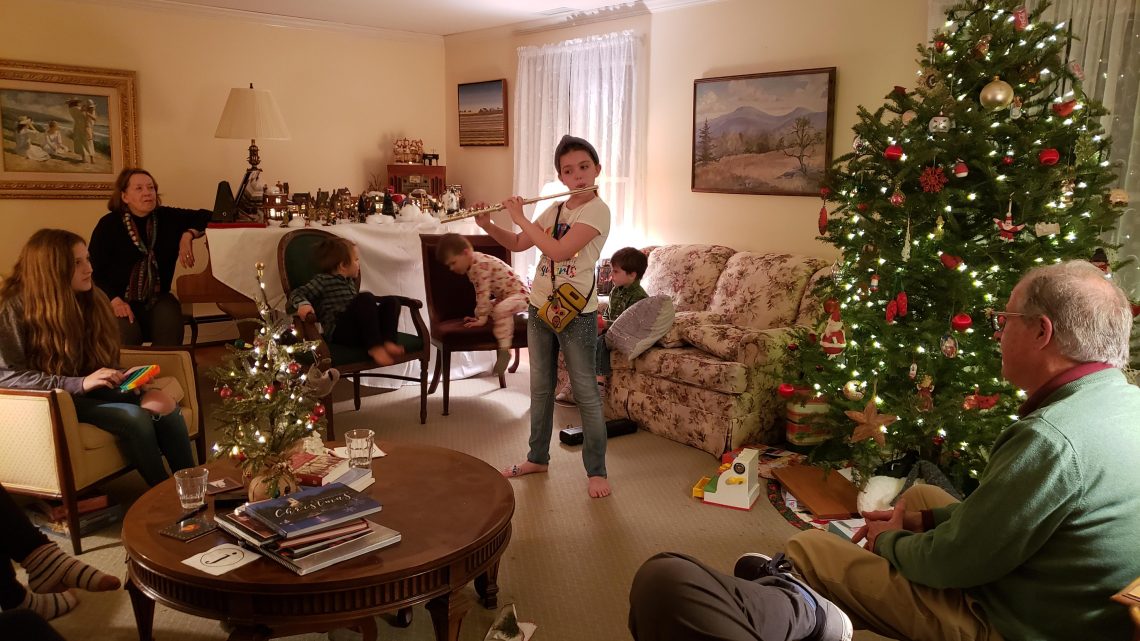 In the Christmas season, Marsha’s extended family usually gathers for an evening of song. Christmas carols and traditional songs are belted out by the three generations assembled as someone leads from the piano. The musical efforts are sustained by holiday eats and beverages – wine, punch or cider.

It’s one of the most Christmassy things we do – setting aside the shopping, cooking, wrapping and decorating for a time of family fun. And fun it is!

Children of all ages join forces with their cousins, singing favorite songs and eating a few too many Christmas sweets.  Fudge, each family’s favorite cookies, spiced nuts and sometimes a fruitcake are all on offer.

The level of musical play can be pretty high.  With full attendance, there can be three middle school music teachers (two retired, one active) and a college professor of music theory. One cousin minored in flute, while her brother trained as a classical piano player. A third treads the boards in musical theater.  The rest just love to sing.  Meanwhile, there’s me, trying to carry a tune in the proverbial bucket.

Everyone joins in the fun.  Little kids get to play their holiday program pieces on the piano, violin or flute. Familiar songs get all the voices in parts, while less familiar numbers might get just a few. Some know all the verses, others just the first and last. 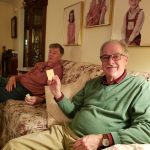 The evening ends with a spirited rendition of the Twelve Days of Christmas.  Numbers are drawn from a basket, assigning a verse to each singer.  There’s no saying no.  Everyone, except the piano player, takes a number.  It is, to use today’s popular phrase, a no-judgment time.  Just sing, or say your bit and have some fun.

It’s hard to get through all twelve days without some goofs, forgotten lines, and distractions, but that adds to the merriment. At the end, there’s a considerable sense of accomplishment and applause all around.

Last year, there was a little more silliness than usual, as our granddaughter Moira, discovered that you could have some fun making up lyrics.  Her line, “Five golden rings” sung with the usual shift of rhythm became “Five onion rings.”

She was delighted with her discovery and everyone began to spin-out other food verses to replace the traditional ones on the premise of, “My kitchen gave to me.” We hit on a few, but the onion rings were the big success and became Moira’s musical theme during the holiday season.

The close bond between Christmas celebration and food continues on in song. Think chestnuts roasting on an open fire and turkey to keep the season bright.  Then there’s figgy pudding presented with a cup of good cheer. Pumpkin pie, not to be outdone, features in at least three popular Christmas tunes.

In the traditional twelve days of Christmas the three French hens, six geese a laying and eight maids a milking are all headed for the table. Beyond that, the infamous partridge in a pear tree is an undeniable food reference if you’re of that mind-set.

It’s easy enough to take the rhymey tune and twist the lyrics into food references – sometimes more successfully than others.  Some versions are available online.

The Twelve Days of Fast Food doesn’t seem  Christmassy, but it does contain the line, “Five Onion Rings.”  Sorry Moira, not your original line, but a good one.

Woman’sDay.com has cleverly created a delicious looking recipe for each verse – Poached Pears, Turtle Dove Caramels, and a Swan Pavlova to name a few – turning the whole song into a delicious party menu.

This year, we’re having the gang for Christmas dinner at our house. I’m going to encourage everyone to come up with a verse for each item on the menu. We’ll surely have at least twelve different dishes.  Hmm, I wonder what rhymes with mashed potatoes?

Next post From Sunday Arts and Style: A decade of memorable eating