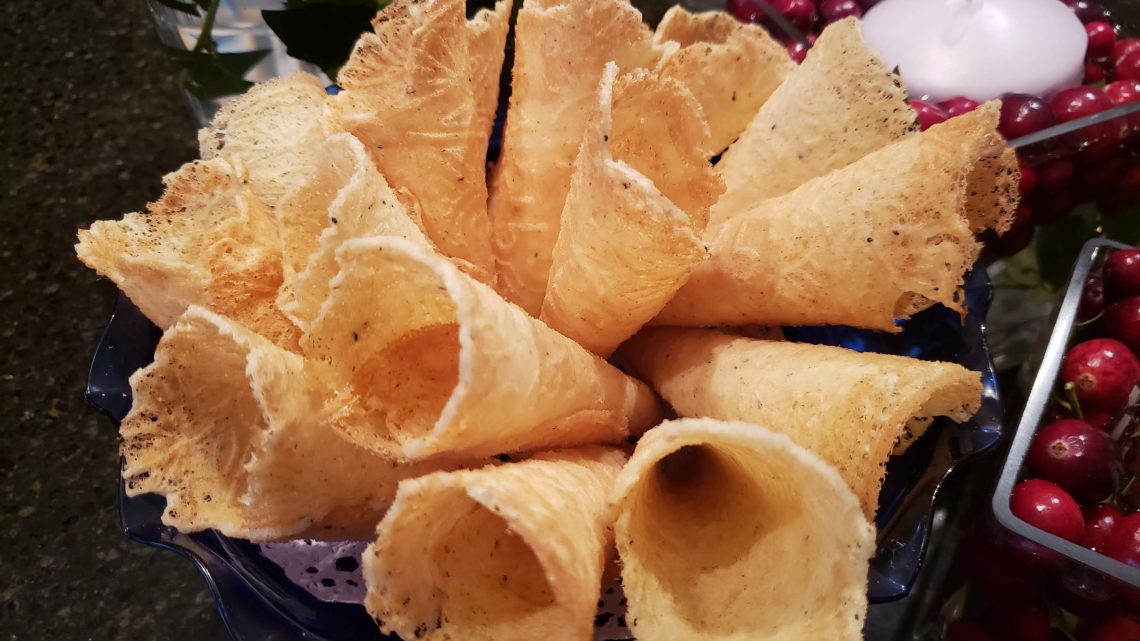 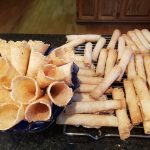 Berit Halvorsen flipped the Krumkake off the electric waffle iron with the practiced ease gained from a lifetime of experience.  The traditional cookies, embossed with a pattern from the cooking iron, are a mainstay of Christmas in Scandinavia.  Some were rolled around a cone shaped wooden form while warm. Others were wrapped around the handle of a wooden spoon to form tubes.

Waves of immigration have brought us Christmas traditions from around the world.  Succeeding generations have sustained those food memories – delicious eats that call up the flavors and aromas of their heritage. 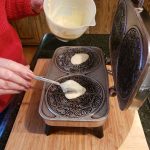 In the long dark days of a Norwegian December, baking is at the heart of Christmas.  Berit, raised in the small rural town of Gyland far from the big city, fondly remembers the aromas of holiday baking in her parents house.   She continues the traditions, baking Kransekage, a tower of marzipan rings in the shape of an evergreen tree in addition to her own Krumkake

With a ready smile, slender and energetic, she works in her Christmas-red hand-knitted sweater.  When I asked for the recipe she pulled out a well-used recipe card titled, Mor’s Krumkaker (mother’s Krumkakes).  The hand-written card listed ingredients. The method was light on detail, more a reminder than instructions for a beginner. A batch makes around 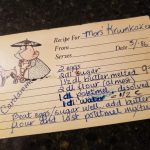 Off to the side of the card was the word, cardamom. When I asked Halvorsen about it her face lit up. “It’s such a Scandinavian thing,” she said. Popular year-round, cardamom is everywhere during the holidays. It’s a tradition that may have begun with Viking traders or traveled up from Moorish Spain in the middle ages. The piney, minty aroma filled her kitchen as the Krumkake cooked.

There was no quantity for the cardamom listed on the recipe card. When I asked, she smiled and said, “Add it to taste – at least a teaspoon.”  That’s quite a bit of the pungent spice for a cup of flour. 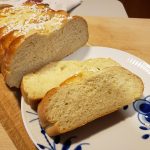 Cardamom bread is baked fresh at the Scandinavian Butik in Norwalk at this time of year.   Light and fragrant, dusted with slivered almonds and pearl sugar, Scandinavian expats and descendants line up for the loaves during the holiday season (order in advance).

The Butik is the source of specialties for both the local Scandinavian community and mail order customers around the country. Leading up to Christmas, the store is crammed with traditional foods and colorful decorations. On baking days the tempting aromas of Kringle, Cardamom Bread, Rug Brod, and Cinnamon Buns swirl through the store. 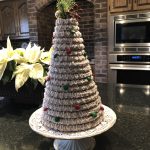 Back in Berit’s kitchen, her impressive Kransekage tower is made with the help of a hand-crank meat grinder she found at a tag sale. Raw almonds, the foundation of the dough, are ground by hand. Confectioner sugar and egg whites round out the recipe.  That’s all there is.

Berit used the same grinder to extrude the dough into the rings that will form the stack. The ropes of dough are baked on forms to get the carefully graduated sizes to form the traditional shape.  When they cool, a zig-zag squiggle of icing across the top of each ring glues it to the next layer. 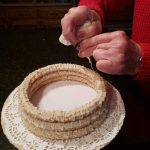 The towers are baked for special occasions year round but especially at Christmas. Berit likes to dot red and green M&Ms on the sides to carry out the Christmas tree effect.  Any leftover rings can be broken up and eaten like cookies. The chewy texture and almond flavor is irresistible.

After a morning in Berit’s kitchen with a cup of coffee and lots of sampling, Marsha and I agreed that it all tasted like Christmas.

Next post From Sunday Arts and Style: On the twelfth day of Christmas my kitchen gave to me

Previous Article From Sunday Arts and Style: Put some sparkle in holiday celebrations